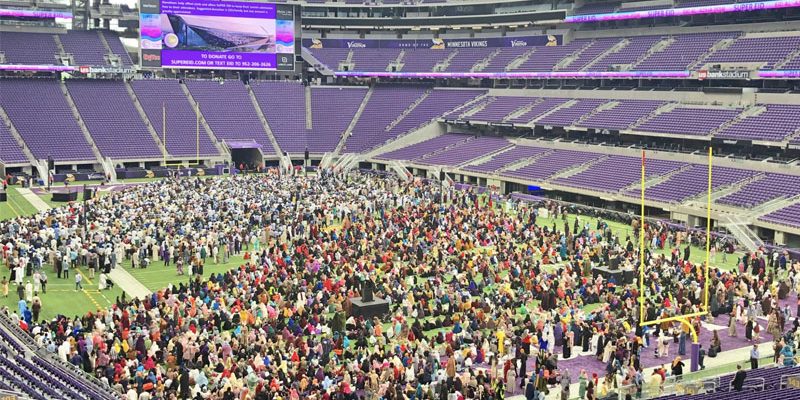 Tens of thousands of Muslims gathered into US Bank Stadium in Minneapolis, Minnesota on Tuesday for their annual Eid Al Adha holiday. Eid Al Adha, also known as “Festival of Sacrifice,” typically features the sacrifice of an animal. The sacrifice was spared from the US Bank Stadium location, but was nevertheless carried out throughout the world in other such Muslim celebratory areas.

This Islamic holiday has been celebrated in Minnesota for years now, however this was the first time it took place in the massive Viking Stadium. Perhaps the upgrade in location coincides with the proportional representation of Muslims in the area.

Since the 1990’s, Minnesota has received a substantial influx of the Islamic faith by ways of immigration. After decades of growing representation in Minnesota, the first ever Somali Muslim elected to office in the United States took place in this state in 2016. That very Representative, Ilhan Omar, is now set to become one of the first Muslim women elected to Congress later this year.

With growing representation and growing proportion of the population, one can expect a growing cultural presence to follow in stride. Thus, the annual “Festival of Sacrifice” being held in Vikings Stadium, the largest construction project in Minnesota history. No sacrifice was performed this year, but perhaps that will follow in years to come. For this year’s festival, the celebration settled for chants of “Allahu Akbar” ringing throughout the 11 levels of the stadium.

America is embracing this new way of life with open arms. This is certainly one of the more divergent cultural developments in recent history. How will this continue to play out? Will acceptance and tolerance be values reflected by all sides of this cultural experiment? With an emergence of representation in U.S. politics, it becomes a curious inquiry as to whether the laws of land will gradually evolve with the worldview of these new politicians.

Just recently in Houston, Texas, Muslim immigrant Ali Mahwood-Awad Irsan was put on trial for suspected honor killings. He is presumed to have killed his daughter’s American husband and her friend because of the perceived disgrace his daughter had brought to the family.

Typically, a defense is oriented around trying to prove the accused innocence or lessening the degree of the crime. In this case, an entirely different direction was taken. When Irsan’s wife took the stand, she told the jurors that her husband actually intended to additionally kill three others, including his daughter, to further “clean his honor.” There was no shame or guilt from the perspective of the defense, but rather an incomplete self-imposed justice. From this worldview, the honor killings were just and justice demanded that more murders were necessary.

It took the Harris County Jury all of 35 minutes to find Ali Mahwood-Awad Irsan guilty of capital murder. Honor killings are evidently not received so well by the greater American public and traditional culture.