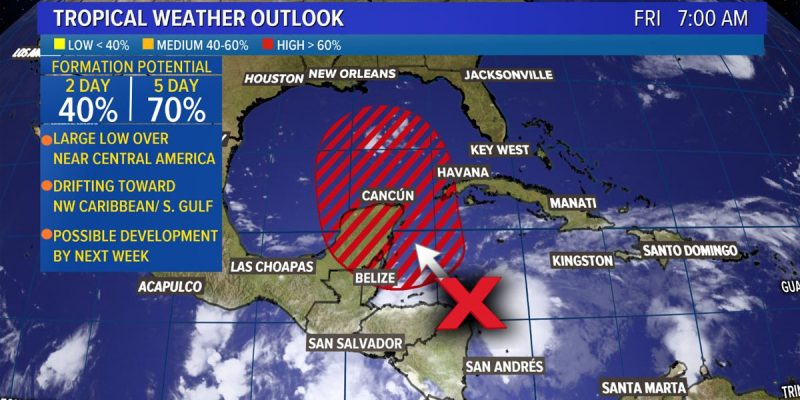 There’s a tropical disturbance in the Caribbean just off Honduras which is moving into the Gulf of Mexico and likely to become a tropical depression in the next five days.

While the system is likely to make it to the Gulf of Mexico, it’s too early to say where it will go from there or whether it could strengthen further, forecasters say. Josh Eachus, meteorologist with WBRZ in Baton Rouge, wrote that much of what happens will depend on the timing of a cold front thats coming in from the northwest and how it interacts with the tropical system.

A cold front in the region could make the approach of any tropical low very interesting later next week. With the right luck, maybe a win/win? | https://t.co/EK444216RA pic.twitter.com/R7era7MVji

It’s too early to know whether this system will develop into a named storm much less a hurricane, and it’s also too early to know if Louisiana or Texas have anything to worry about, but after what Florence did to the Carolinas, one can be excused for an abundance of caution.

The last hurricane to hit Louisiana was in October of last year, when Hurricane Nate made landfall near the mouth of the Mississippi River with 85 mph winds. It did little damage, affecting Biloxi, Mississippi more than it did Louisiana. Hurricane Harvey also affected Louisiana, actually making landfall in Cameron Parish, becoming a tropical storm around the time of its landfall. As much as four feet of floodwater hit Lake Charles as part of the storm.

The last hurricane making a true hit on Louisiana was Hurricane Isaac in August of 2012. Isaac carried eleven feet of storm surge in Shell Beach and knocked out power to more than 600,000 customers in the state.

Interested in more news from Texas? We've got you covered! See More Texas News
Previous Article AVALLONE: They Only Vote For Themselves
Next Article APPEL: If We’d Use The Mississippi River To Our Advantage Louisiana Would Prosper