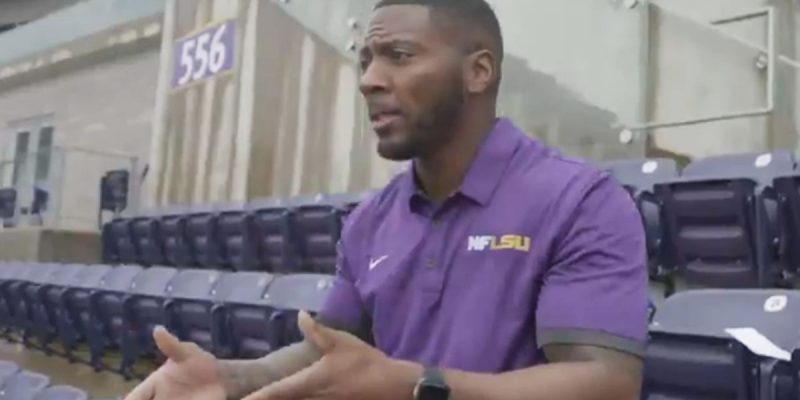 …or more to the point, LSU can fix that with this, the Mother Of All Hype Videos starring former Tiger safety and NFL broadcast analyst Ryan Clark…

🗣 WE COMIN'… AND WE AIN'T BACKING DOWN! pic.twitter.com/sUcv2I8k9x

The game is drawing an appropriate level of hype for what it is – a battle between #1 and #3 in the college football playoff standings. It’s the team widely, if not universally, regarded as the best in the country against the team with the best resume in the country this season. It’s Alabama tradition vs. Tiger Stadium atmosphere. It’s one of college football’s bitterest rivalries. It’s a contest between two teams at the top of college football’s toughest division with the winner all but assured of a trip to Atlanta for the conference title. It’s a playoff berth likely on the line, though Alabama could likely play themselves back into the playoffs even with a loss Saturday.

It is college football’s biggest game.

And Alabama is favored by 14.5 points to win it, even in Tiger Stadium.

This point spread, which could well be correct, is nevertheless an insult to LSU – as College Football News’ SEC columnist Russ Mitchell noted in a legendary radio segment with a sports talk station in Tuscaloosa on Wednesday…

The arrogance of the Alabama fan base – which, considering they’re the defending national champion and have been #1 in the polls all season, is not unwarranted – is not lost on anyone in Baton Rouge. And the hatred – white-hot hatred – is building.

There will be 103,000 fans in that stadium Saturday night. ESPN Gameday is coming to Baton Rouge. CBS is devoting prime time to telecast the game. It will have the highest ratings of the entire regular season without a doubt.

This is it. This is the big-time.

Last year, after a 24-10 loss in Tuscaloosa which appeared a much tougher game than the score indicated, LSU head coach Ed Orgeron said of his team, “We comin’. And we ain’t backin’ down.” That’s been a mantra for the Tigers for the two-week leadup to this contest, though it’s been the source of snickering and jeers among the Bama fanbase.

We’ll find out who’s jeering on Saturday night. As Mitchell noted, Alabama hasn’t played a team remotely close to LSU’s talent and toughness this year (the best team on their schedule to date was Texas A&M, currently #20 at 5-3), and they’ve certainly not been in an environment this electric in 2018. LSU, meanwhile, has been in four games which can best be described as wars against opponents ranked in the Top 10 – Miami, Auburn, Florida and Georgia. Miami and Auburn have sputtered since losing to LSU, but Georgia is currently #6. Florida, who outlasted LSU in Gainesville, is #11. LSU also defeated Mississippi State two weeks ago; those Bulldogs are #18, meaning five of the Tigers’ eight opponents are or were ranked in the top 18 in major polls.

When Georgia came to Baton Rouge ranked #2 three weeks ago and suffered a shattering 36-16 loss, one reason appeared to be that the intensity of the crowd and athleticism of the opponent were a giant step up from anything they’d seen in previous victories over Austin Peay, South Carolina, Middle Tennessee State, Missouri, Tennessee and Vanderbilt – all of whom they’d dispatched by significant margins. In that respect Alabama may be similar – the 45-23 win they posted over Texas A&M was practically the only game in which they saw opposition of any real measure.

Is the Tide ready for the maelstrom that awaits in Death Valley? Are their players as vainglorious and puffed-up as their fans are? Does LSU have the playmakers to stay in this game until the end? Is the absence of All-American linebacker Devin White for the first half of the game due to a questionable targeting penalty called on him two weeks ago going to take the Tigers out of the game before they’re even in it?

Will the SEC officiating crew, headed by Marc Curles out of Birmingham, survive what’s sure to be a national level of scrutiny after two weeks of griping that the Tide is benefiting from bias in the SEC office?

The story lines mount up. The hype spirals. It’s almost Saturday night in Tiger Stadium, and we can not wait.

Interested in more news from Louisiana? We've got you covered! See More Louisiana News
Previous Article An Updated Rundown of Louisiana’s Congressional Races
Next Article BAYHAM: Mike Detillier on the Biggest Weekend in Louisiana Football, Ever