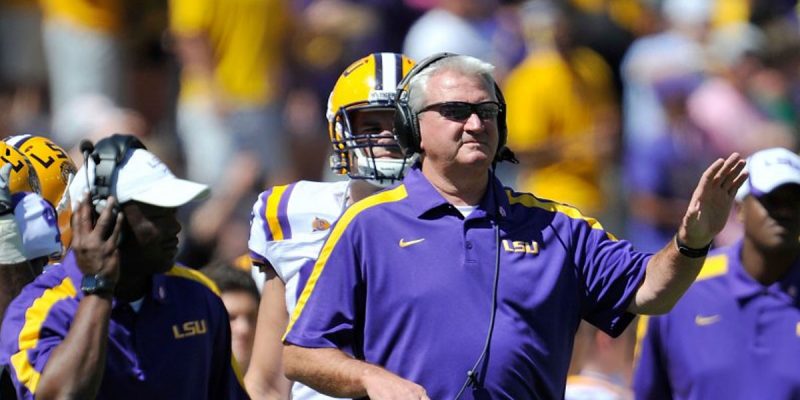 Steve Ensminger might not be the solution, and he might even be a problem, but he isn’t THE problem for what was a so-so LSU offense in 2018. We really would have liked to see LSU’s offense look like something Oklahoma State or West Virginia or UCF put on the field this year, and often the product was a lot more Les Miles than Josh Heupel. That’s something which will go as a black mark on head coach Ed Orgeron’s escutcheon, because what he promised the fans when he installed Ensminger as the offensive coordinator was a wide open offense which used its talent to put up some numbers.

What we can say after watching a year of Ensminger is that he’s a pretty good playcaller within the scheme and design he has – but the problem seems to be the size of the box he operates in.

Some of that is personnel, as we’ve discussed previously. This was a bad offensive line which was putrid in pass blocking, and therefore steps had to be taken to keep quarterback Joe Burrow from getting killed in the pocket – especially when Burrow’s only scholarship backup Myles Brennan was slated for a needed redshirt year. That meant tight end Foster Moreau wasn’t available for use as a pass receiver, when Moreau might well have been this team’s most consistently productive receiver given the chance (he only had 20 catches on the year, when he was probably capable of 30 or 40 had he been used as a receiver full-time). It also meant keeping running backs in for pass protection rather than being able to use a Clyde Edwards-Helaire or Lanard Fournette as a third down back and a catch-and-run specialist.

We all hated those max-protection routes which pitted two or three receivers against the entire defensive secondary, but all too often the choice was either those low-percentage calls or the risk of getting Burrow killed by sending out five receivers and hoping the offensive line could give Burrow enough time to unload the ball.

We can’t say Ensminger chose wisely for the former as often as he did. It’s a point worthy of debate. You can run max-protection pass plays and get away with them when you’re throwing to an uncoverable star like Josh Reed or Odell Beckham, but as productive as Justin Jefferson was this year he’s not a guy you can set against a double team from a defense like Auburn’s or Mississippi State’s, much less Alabama’s, and have him consistently get open.

What we can say, though, is because the running backs and wide receivers struggled so much to break long runs or beat defenses for long pass completions, Ensminger had to be better as an offensive coordinator than any of his contemporaries in the Top 10 or 15 in the country. Because due to the lack of big-play potential at the skill positions to generate a drive of, say, 75 yards, Ensminger had to guess right on 10-12 playcalls during a possession. That’s probably twice as many as, say, Mike Locksley at Alabama or Ryan Day at Ohio State, whose rosters are oozing with star playmakers at running back and wide receiver. Watch Alabama play and their touchdown drives usually entail a 40 yard bomb or a 60 yard touchdown scamper (more about that below); with LSU it takes six or seven first downs in a row to punch the ball in from the one yard line after a first and goal from the six.

That’s why Cole Tracy ended up attempting a mind-numbing 29 field goals and only 38 PAT’s this year. If your people can’t get into the end zone with big plays, you’re going to have to live your life in the red zone, and you might well struggle there.

Which LSU did. The Tigers converted with 31 touchdowns in 55 red zone trips in 2018, a 56 percent success rate below the national average. That number is bad enough, but when you consider that LSU only scored 44 total touchdowns all year and had to get 31 of them courtesy of a successful red zone trip it really proves the point about the lack of big-play potential. Remember, two of those were defensive touchdowns – so there were only 11 long-play touchdowns in 12 games by the Tiger offense. Compare that to, say, Vanderbilt, who had 14 big-play touchdowns. Or Ole Miss, who had 18. Or Texas A&M, who had 13. If you want to know one reason why Auburn, who at the beginning of the season was a Top 10 team, fell off to only 7-5 this year, consider that their offense only had 10 big-play offensive touchdowns – even less than LSU.

Georgia had 23 big-play offensive scores. Clemson had 24. Alabama and Ohio State had 28. Oklahoma had 29. You don’t think of Notre Dame as having a particularly explosive offense but they had 18 big-play touchdowns. Interestingly enough, Washington State had just 13 – but in 60 red zone trips the Cougars had 46 touchdowns for an amazing 77 percent.

So Ensminger gets judged because the offense doesn’t score enough touchdowns, and to get them he has to guess right on playcalls in the part of the field where the defense is generally toughest, and he has to do that with the same personnel who can’t get him the big plays that would avoid having to do the red zone dance in the first place.

How much of this is a deficient scheme and how much of it is a good coach trying to paper over personnel problems? We probably don’t have enough of a sample to know for sure.

What we can say is Ensminger doesn’t appear to be very big on misdirection, something his predecessor Matt Canada lived on with those jet sweeps and counter plays he ran again and again in 2017. Nor is Ensminger particularly big on developing a screen game, something teams without speed demons on the outside will often employ as an equalizer – LSU was one of the worst screen teams we’ve ever seen this year, and not surprisingly they didn’t run very many.

Burrow turned in a good season and he appeared to get better as it went along – it’s a shame the A&M game turned out to be a loss, because his 25-of-38, 270-yard, three-touchdown passing performance to go with 100 yards rushing DESPITE suffering six sacks was one of the best efforts by a Tiger quarterback in recent memory. Burrow, in fact, put up some pretty salty numbers in the season’s final three games: 60 completions in 87 attempts (69.0 percent) for 772 yards (8.87 yards per attempt), six touchdowns and no interceptions. That’s a 166.3 efficiency rating, which over a season would put Burrow 7th in the country (ahead of McKenzie Milton, Shea Patterson, Dwayne Haskins and Trevor Lawrence, among others) and behind only Alabama’s Tua Tagovailoa and Georgia’s Jake Fromm.

For the season it was only a 127.4 rating, and that was 80th, sure – but it’s the trend we’re looking at here. Burrow looked to be getting better under Ensminger’s tutelage and that should be taken into consideration if you’re going to judge the coach’s work product. Should those improved numbers be discounted for the fact they came against lesser pass defenses? Perhaps – but then you’d have to factor in the season’s numbers as coming against a gauntlet of defenses ranking among the nation’s best in the first nine games.

So it’s a mixed bag.

Nobody ought to be too excited about this offensive product, and it’s understandable that the fans would be grousing about it. But the case against Ensminger would be stronger if you could point to a Derrius Guice at running back or a D.J. Chark at wide receiver who was wasted in this scheme, and you really can’t – so maybe this was all these kids could have done no matter who the playcaller was.

And there’s another part to this, which is that you’re judging this based on one year in a scheme the players all had to learn. Is that fair? And does changing Ensminger out make things worse from the standpoint of starting all over again in the offseason?

It’s not a decision we can claim expertise to make, frankly.

Next: Did the coaching staff do the best job of maximizing LSU’s talent in 2018?

Interested in more news from Louisiana? We've got you covered! See More Louisiana News
Previous Article Nine Thoughts On A 9-3 LSU Season – THOUGHT FOUR: Those 6-6 And 7-5 Predictions Were Close To The Truth
Next Article Must watch, Hilarious: “A Millennial Job Interview” [video]