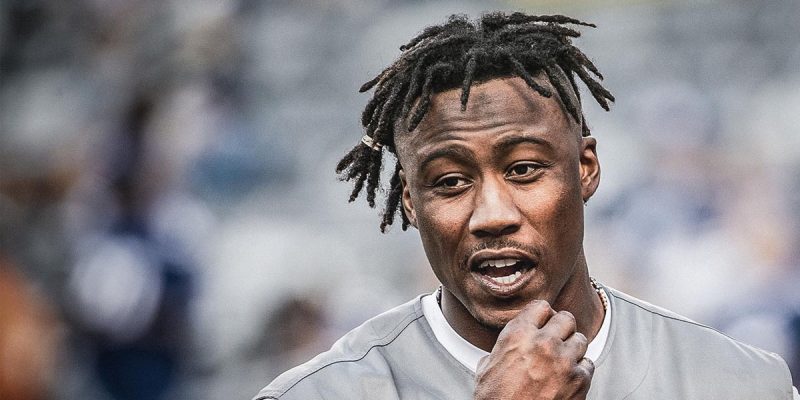 After all, Bryant – whose signing last week touched off two days of mass euphoria about the Saints’ passing game and impending invincibility before he tore his achilles tendon on the last play of Friday’s practice – would likely have made a big difference in giving Drew Brees that last weapon he’s looking for to complete the team’s array of skill talent. The Saints have had a hole behind Michael Thomas at wide receiver since Ted Ginn went on injured reserve, and the problem has gotten worse recently since Cam Meredith, who was a free agent signing in the offseason it was hoped would make a big splash coming back from a bad 2016 knee injury which knocked him out of action all last year, simply wasn’t healthy and had to join Ginn on IR.

And then Bryant, who’s not even the third Saints receiver now on injured reserve. Travin Dural and Tommylee Lewis are also there. So now it’s five – a whole receiver room full, and a pretty good one – out of action.

Now it’s Marshall, who like Bryant has a very distinguished career behind him to go with some questions about whether he’s still got it.

The Saints worked out both players last week before signing Bryant. Today, with Bryant out for the season (and then some), they went with Marshall.

“He moved well,” Payton said about the Marshall workout. “Smart. He’s experienced. Someone that’s been in a number of systems. Overall, he had a good workout. He’s got good length and size. He’s another big target. We’ll see how it goes this week and what our plans are.”

Unlike Bryant, Marshall is not far removed form playing an NFL game. He played six games with the Seattle Seahawks before his release Oct. 30. Marshall last season played five games with the New York Giants before an ankle injury ended his season.

At 34, his 970 receptions for 12,351 yards ranks second among active receivers to Larry Fitzgerald of the Arizona Cardinals. Marshall has 83 career touchdown receptions, and he led the league in touchdown catches as recent as 2015, when he caught 14.

“I thought size was important,” Payton said about the 6-foot-5 Marshall.

So was experience, the coach said. “And someone we felt like has strong hands,” he added.

The lack of a secondary threat behind Michael Thomas didn’t hurt the Saints Sunday in a 51-14 rout of the Cincinnati Bengals, as Brees completed 22 of 25 passes for 265 yards. He hit Keith Kirkwood, a rookie out of Temple called up from the practice squad for his first action as a pro following Bryant’s injury, twice for 45 yards, he hit Dan Arnold, the third-string tight end who lines up as a wide receiver occasionally, twice for 25 yards and Austin Carr, who at the moment is the Saints’ third receiver, twice for 20 yards. But rookie Tre’Quan Smith, who is the starter opposite Thomas, didn’t catch a pass in the game. Smith has a great deal of upside, but he’s not quite ready yet to be a big-time NFL receiver. He might be a year away.

The Saints were hoping for Bryant to give Brees that second outside receiving threat to take the double teams off Thomas, but the achilles injury took that off the table. Can Marshall be that guy?

There are two issues here. One is whether Marshall has the physical ability left after catching almost 1,000 career passes and missing two-thirds of the season last year with injuries while on the Giants’ roster. Obviously Payton saw something he thought was worthwhile in that workout, or else they wouldn’t have offered Marshall a contract.

The second, assuming he’s still got it, is what Marshall can do paired with a quarterback like Brees. For most of his really productive years in the NFL he was paired with some so-so (at best) quarterbacks: Jay Cutler and Kyle Orton in Denver, Chad Henne and Matt Moore in Miami, Cutler again in Chicago, Ryan Fitzpatrick with the Jets. The last two years have been with some bigger-name QB’s, but Eli Manning is clearly on the downstroke of his career with an awful offensive line with the Giants, and while Russell Wilson hasn’t lost his skills the Seahawks this year don’t have much of an offense. Marshall got cut after dropping four passes in as many games in Seattle, which is why there’s a question about how much gas he has left in the tank.

And then, as USA Today’s John Sigler noted, there’s the chemistry issue – which is perhaps even riskier with Marshall than it was with Bryant (and now both of them are in the Saints’ locker room)…

However, Marshall is a much more volatile presence than Bryant. He’s been kicked out of every locker room he’s stepped into in recent years and was cut by the Seahawks in October after dropping four passes in as many games. Like Bryant, there’s a chance he adapts well to a Saints roster full of positivity, but there’s just much reason to suspect Marshall turns into a negative influence for an attention-seeking superstar in Michael Thomas.

From a football perspective, Marshall is a logical choice as someone who is best-suited for lining up from the slot and inline as a receiving-option tight end. If the Saints go this route, hopefully he’s on his best behavior and helps them push towards a Super Bowl victory.

Here’s a guy with an opportunity to make his 1,000th NFL catch for a team which could have home field advantage through the playoffs. You can bet he’s excited. And though Bryant might have been a surer thing for the Saints’ passing game, Marshall might just rekindle his career in time to help the Saints bring home the Lombardi Trophy.