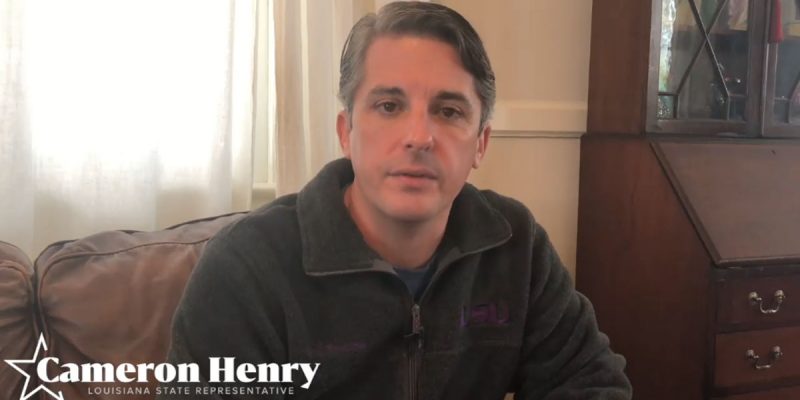 We had planned to do something this week on the various subplots surrounding Gov. John Bel Edwards’ coming attempt to pass a teacher pay raise in the 2019 legislative session, but it turns out we might not have to do much – state representative Cameron Henry, who’s been in the news lately for his having vetoed Edwards’ attempts to recognize some $150 million in additional revenue to the Louisiana treasury, just put out a video addressing the latest developments with respect to that.

Henry says what Edwards is attempting to do isn’t really a teacher pay raise. It’s more like a one-time bonus. Henry says he’s actually in favor of tweaking the state’s Minimum Foundation Program formula so as to make funding available for a permanent pay raise for the state’s teachers, which is a bit of an interesting development in how it might reframe the debate over the pay raise.

Here’s Henry’s video, and then we’ve got a bit more analysis on this issue below…

IF didn’t catch what he’s saying, here’s the connection between the fight at the Revenue Estimating Committee, where Edwards and his allies want to recognize that $150 million in extra revenue and Henry and House Speaker Taylor Barras are resisting, and the teacher pay raise: essentially, Edwards is trying to just spend the surplus on giving the teachers a bump next year and thus reaping the benefits of that as he runs for re-election – which, according to the Associated Press, Edwards was hoping to do more or less unilaterally upon declaring that surplus.

Most immediately, refusal to change the forecast stalls a $43 million list of spending plans this year, mainly on public safety programs. But the move also keeps Edwards from having the extra cash he anticipated to steer toward the public school pay raises.

The governor, whose wife was a teacher and whose daughter is an elementary school counselor, has described the salary boosts as his “number one priority” for the legislative session that starts in April.

The proposal Edwards outlined involves a $1,000 pay raise for teachers and a $500 increase for support staff such as teacher aides and cafeteria workers. He said he’ll have a three-year plan to raise salaries to the Southern average, along with block grant increases to school districts.

The price tag for the first year, Edwards said, is about $135 million.

Edwards expected improved tax collection projections to help cover that cost in his budget proposal due to lawmakers in February.

Barras, whose wife is a retired teacher, and Henry said they support teacher raises and aren’t trying to stop them.

“I don’t expect a single member to vote to oppose the teacher pay raise,” Henry said.

But Barras said: “In all fairness to our teachers, we need to make sure that the revenue is reliable and certainly recurring, and I just don’t believe we’re at that point.”

So what Henry is saying is that if Edwards wants a teacher pay raise he’s going to have to go the whole way in driving it through the most official channels possible – namely, through the MFP and not some supplemental appropriation. And because that $135 million is more than the available projected surplus (which may or may not actually materialize) once you back out the $43 million in public-safety spending the legislature has already appropriated, Henry is asking the governor what he wants to cut in order to produce that pay raise.

Edwards doesn’t want to cut anything. He just wants the money to be there to pay the teachers more. So if the money isn’t actually there, well…then you’re going to need to have your taxes raised to make it happen.

That’s how it’s gone for the last three years. Edwards has demanded the growth of government, and when the people of Louisiana haven’t provided him with enough in taxes to fulfill his wishes, he’s raised the alarm and threatened the end of college football and the eviction of seniors in nursing homes.

And he’s going to do that this time as well. It’s all he knows how to do.

So far the Republicans in the legislature haven’t done a good job of clearly messaging their response to this. Henry is trying, though he’s been savaged as a bad guy for not going along with the REC’s rosy projections and paving the way for Edwards’ swag for the teachers. Probably the main reason the Republicans haven’t offered a clear message is that they’re not united on one. We’ve talked to a few of them and the feeling seems to be that fighting a teacher pay raise in an election year is poison, so they’re not really fighting one – but the devil here is in the details and it’s going to be Edwards’ responsibility to navigate those.

For example, should this just be an across-the-board bump for the teachers? Why not have it be a merit pay raise? And what role do the teacher unions play in this? Are they going to raise their dues as soon as the pay raise comes, and if so isn’t this just a way for John Bel Edwards to launder himself some massive contributions to his re-election from your tax dollars? And why is this the state’s responsibility rather than that of the local school boards who actually employ the teachers? We already know that state government is too expensive and has too large a footprint compared to local governments – what does this do about that?

If this initiative is going to be killed perhaps it’s with a thousand cuts rather than one giant counterstrike. We’ll see. But whether the pay raise happens or not, it’s going to be important for the Republicans in the legislature to smoke out whether this is really an investment in public education or just a payoff to the governor’s chief constituency – because if it’s the latter, Louisiana’s voters ought to know about that.