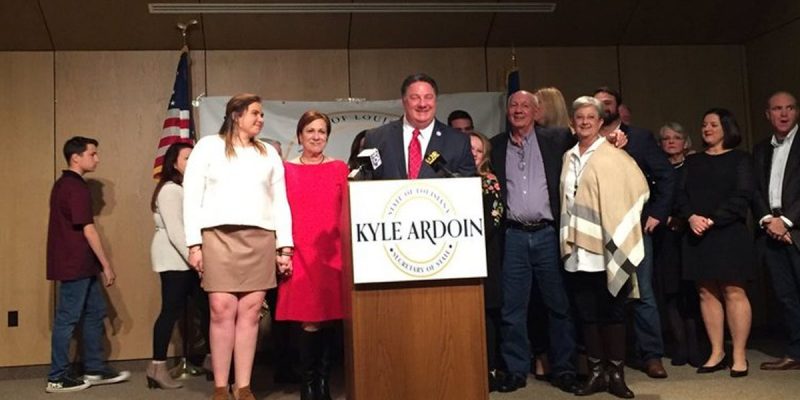 The weather was terrible most of the day, and there weren’t a lot of compelling items on the ballot in most of the state, so Saturday’s 17.2 percent turnout statewide for the Secretary of State runoff and a few local elections wasn’t all that much of a surprise.

As such, we probably shouldn’t draw too much in the way of lessons from Saturday’s elections. Some things are pretty clear, though.

Ardoin won a 59-41 triumph over Collins-Greenup, and for most of the night he was above 60 percent – dipping just below that number when the final precincts (which were, not surprisingly enough, out of Orleans Parish) came in at the end of the counting. Orleans was the only true weak area for Ardoin – he only pulled 17 percent there. Elsewhere, though, the Republican displayed significant strength, at least in a low turnout election. Here’s how he did in some of the more populous parishes in the state…

Those are not all uniformly Republican parishes, obviously, and Ardoin won with big margins in all of them except East Baton Rouge and Caddo; his loss in Caddo can be attributed in large measure to the fact two Democrats were in a runoff for mayor of Shreveport and neither offered very much to attract Republican voters.

These are the kinds of numbers you’d like to see Republican candidates pull on Election Day, though it’s fair to note Collins-Greenup was a candidate with zero resume (her most relevant experience to be Secretary of State was an unsuccessful race for Clerk of Court in East Feliciana Parish some years ago) and not much of anything in her campaign war chest. On the other hand, somebody was spending money on Collins-Greenup’s get-out-the-vote effort – it looked like that was the Louisiana Democrat Party, which called down an enormous amount of cash from outside the state.

So Ardoin didn’t do this against air, and he did it in a race which didn’t engage the electorate. After all, Secretary of State is largely a ministerial job from which you can’t really advance an ideological agenda – at least, not if you’re a conservative.

It was an impressive victory, and one largely won on the cheap. Ardoin managed to pull 59 percent of the vote spending only around $400,000.

And for that victory, which signified the accumulation of three points more than John Bel Edwards received when he ran for governor, the Advocate’s Democrat shill Mark Ballard insulted Ardoin as a “caretaker bureaucrat” while praising Collins-Greenup has having “fared well in cities” despite the results outlined above.

Next year in some of the more contested races it’s obviously going to take more than $400,000 to post similar results to Ardoin’s. But the challenge for the LAGOP, and its candidates, is going to be to hold the majorities for the party Ardoin pulled in those parishes above. They’ll need to do it in legislative races, for the lesser statewide positions and for governor.

Collins-Greenup is still running, and she might signal a trend in Louisiana elections

Not that there’s anything wrong with people who serially run for office, though it’s a bit unusual to see people who actually enjoy it. But it appears that Collins-Greenup is one of those, given that she posted this the same night she got shellacked in a statewide race…

As in 41 percent of the People.

We have a theory about this. Actually, it’s a bit more than a theory, as it’s come from contacts on the Democrat side who have clued us into what’s happening behind the scenes within that party. As our readers will remember, the Democrat who was supposed to be in the runoff was Renee Fontenot Free, who had a bit more institutional support and was thought to have a better shot at winning the race – but Free found herself struggling to get into the teens when Election Day came in the primary while Collins-Greenup topped 20 percent.

And the lesson there is a white Democrat can’t do a whole lot better with the black vote than a white Republicans can when there’s a black Democrat running. That didn’t used to be true, largely because of the deal which had been made within the Democrat Party – in which white candidates topped the ticket and received monolithic black support, in return for serving as patrons to the black community as a special interest.

That doesn’t work so well anymore. John Bel Edwards certainly rode monolithic black support to election in 2015, but his relationship with the black community – particularly as personified by the Legislative Black Caucus – hasn’t been great.

As such, what you’re starting to notice is there are more and more black Democrats running in these down-ballot statewide elections. Kip Holden ran for Lt. Governor in 2015, Derrick Edwards was the Democrat special-election candidate for Treasurer in 2017, now Greenup-Collins.

They’re going to get about 40 percent of the vote. Special circumstances might get them into the low 40’s, but that’s where they top out.

The obvious implication of this is something nobody seems to get so far – especially not the people running around predicting Edwards’ re-election. Namely, what happens if a black Democrat runs for governor next year?

Shreveport has a new mayor, but don’t get excited about it

For some reason, out-of-state money seems to find its way into Shreveport’s local elections. A few years ago more than a million dollars made its way from George Soros’ coffers into the Caddo Parish district attorney race, and that money turned several other local races blue.

Shreveporters will tell you the city is more or less a lost cause at this point due to a bad economy and significant outmigration to Bossier and DeSoto Parishes to the east and south (not to mention Texas just to the west). That played a part in the fact no Republican made it into the runoff in the mayor’s race won Saturday by newcomer Adrian Perkins over incumbent Ollie Tyler.

Tyler has been more or less a disaster in her four years as mayor. Perkins doesn’t promise much better, truth be told – he’s a 33-year old West Point and Harvard Law graduate who didn’t have a job when he entered the mayor’s race. Perkins did serve in Iraq and Afghanistan, so perhaps he learned something useful in the Army.

But it seems like what he does know is how to raise money. Perkins’ raised over $400,000 for the race, which was about double what Tyler brought in. That seems to have been more an indication of dissatisfaction with Tyler than anything else.

It might be Perkins will bring more brainpower to the job than Tyler did, but the basic direction isn’t likely to change in Shreveport. In the aftermath of the race, Republicans there are left to wonder about what it says when two GOP candidates split 34 percent of the primary vote, five percent more than Perkins pulled (Tyler had 24 percent in the primary). There should have been a Republican in the runoff but there wasn’t.

If you’re looking for a reason for party primaries in Louisiana, this race was certainly one.

Mary Dubuisson to the statehouse

Among the other results Saturday was the special election in the House District 90 race, in which Republican Mary Dubuisson, who was the legislative aide to former Rep. Greg Cromer, throttled Republican pastor John Raymond by a 61-39 margin.

The race was a nasty one, with Raymond accusing Dubuisson of being a RINO and Dubuisson’s supporters accusing Raymond of just about everything else under the sun. Those charges appeared to stick – at one point Raymond seemed to be the favorite in the race but his campaign appeared to specialize in alienating voters.

Now we’ll find out whether the charge against Dubuisson, that she isn’t conservative, has any validity. Next year’s legislative session begins on April 8.

Ardoin did managed to carry East Baton Rouge Parish by 100 votes as we noted above, but the other GOP candidate on the ballot, Tre Bargas, who was running for constable, got pummeled 57-43 by Democrat Terrica Williams.

That’s not a good sign, especially considering that turnout in East Baton Rouge was about 25 percent, a good bit higher than it was statewide.

And what drove a lot of that turnout was a pair of tax elections – a whopping half-cent sales tax hike which is supposed to build a billion dollars’ worth of roads but won’t, and a 1.5 mill property tax increase to build a mental health facility. The road tax, which was dubbed the MovEBR program, won with 61 percent and the mental health facility won with 68 percent of the vote.

We expressed our extreme doubts about those taxes and the people who’ll be spending them on Friday. And we’re going to be proven right shortly.

Our skepticism was, unfortunately, not shared by some of the folks who usually oppose tax hikes. Woody Jenkins, who chairs the East Baton Rouge Republican Parish Executive Committee, enthusiastically backed the road tax – and failed to bring any voters along; in the most heavily-Republican areas of the parish, it failed badly.

What this says about the GOP in East Baton Rouge isn’t good. For one thing, it has lost the ability to elect candidates in parish-wide elections, which means any Republican who wants to win is going to be on his or her own and can’t expect the local party to help even if it wants to. After all, we can’t even remember the last time the East Baton Rouge RPEC actually endorsed a Republican candidate who won a contested race for a significant office. And now it can’t even sell a policy position to Republicans in the parish.

No wonder EBR is a Democrat rout at this point. It’s not just demographics. There are seven Republicans out of 12 on the Metro Council, something which probably goes away in the next round of redistricting, but those seven struggle to do anything more than stop bad policy.

At some point the local GOP has got to get its act together and develop some actual mechanics for winning elections – voter turnout, fundraising, candidate recruitment or just coming up with a message its own voters agree with. New leadership might be a place to start.

Either that, or we’ll have to just accept East Baton Rouge is a lost cause and Ardoin’s 100-vote win is the high-water mark for a Republican candidate in the state’s capital parish.