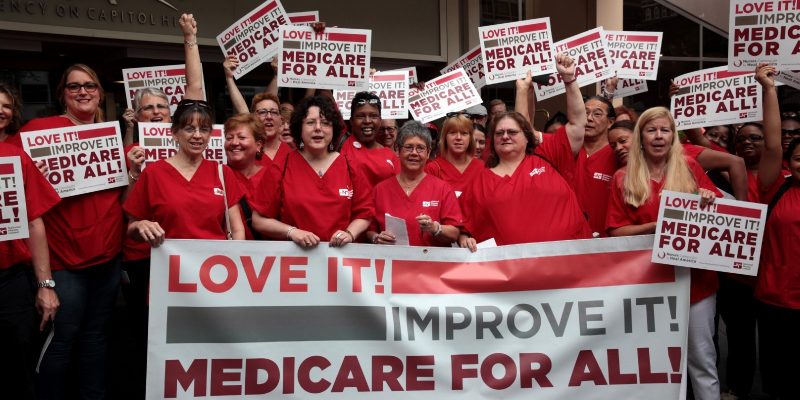 As promised, Democrats on Thursday introduced their Medicare for All Act, which they say will eliminate health care disparities and put patients and caregivers first.

U.S. Rep. Pramila Jayapal, D-Washington, is the chief sponsor, and the bill has more than 100 co-sponsors in the House. It mirrors a bill proposed by Sen. Bernie Sanders, I-Vermont, last year.

A study from George Mason University’s Mercatus Center projects the initiative would add $32.6 trillion to federal budgetary commitments in its first 10 years. Even if individual and corporate federal income tax revenues were doubled, they would not cover the added cost, according to the study.

Mercatus estimates that the program would take up at least 10.7 percent of the projected national GDP in 2022, and about 12.7 percent in 2031.

Sal Rosselli, president of the National Union of Healthcare Workers (NUHW), which represents 15,000 health care workers, said he hopes both the House and Senate pass Medicare for All. He said in a statement that such a program would replace the “patchwork, piecemeal reform schemes that fail to improve quality or contain costs, all while continuing to pad the profits of health insurance and pharmaceutical companies.”

Medicare for All would expand coverage to include “in-home care, dental care, vision care, and true parity for mental health and substance abuse services,” Rosselli says, thereby creating “real health security” for everyone in the U.S.

Both the Senate and House bills would create a universal single-payer Medicare insurance program operated by the federal government. Another 250 million people would be brought into the program in addition to the 60 million already receiving Medicare coverage.

The Mercatus Center and other groups suggest the bill would have the opposite of its intended effect.

“The study results are right in line with those of an Urban Institute study published about two years ago, and resemble those from studies in California and Vermont,” Robert Graboyes, a Mercatus Center senior research fellow and Health Care Scholar, told Watchdog.

According to the Mercatus report, costs would skyrocket because the federal government would be required to fully fund nearly all current national health spending, including individual private insurance and state spending. Medicaid for All would also extend health care insurance coverage to include dental, vision and hearing, which Medicare and many private insurance policies exclude. It also eliminates health insurance deductibles and co-payments that those with private insurance are already required to pay to receive health care coverage, and would cover the currently uninsured.

Such costs would be unsustainable, the CATO Institute says.

Any small benefits it “might deliver to some groups would be totally wiped out by its crushing new taxes, higher administrative costs, and dangerously low-quality care,” Michael Cannon, director of health policy studies at the Cato Institute, said. “It could very well have a downward impact on the U.S. economy and the long-term economic growth rate. Say, for example, an income tax hike is implemented. That’s a disincentive for economic production.”

Other economic effects would ensue, including how state funds are distributed, and the fact that the costs currently paid by states and private companies for health care would be transferred to the federal government, the Mercatus report notes.

Worse still, the plan could result in eliminating private insurance companies, or changing their function to act as an extension of the federal government agency tasked with managing the program, CATO notes.

Cannon said that Medicare administrative costs are far greater than private health insurance company costs. And raising taxes will create a “dead-weight loss” on the economy he says, totaling on average roughly 44 percent of the taxes raised to pay for it. Among individual income taxes, he says the dead-weight loss is at least 52 percent.

Such “dead-weight losses overwhelm the administrative costs of private health insurance, which the federal government has done a lot to inflate in the first place,” Cannon says.