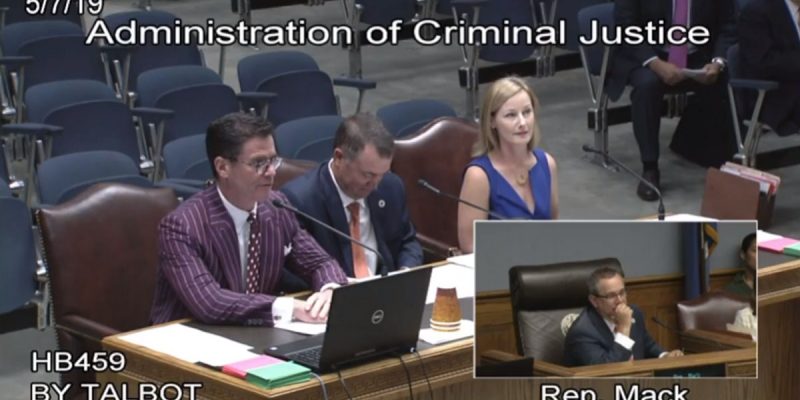 What follows is a tale all too familiar to those of us who have followed Louisiana politics down through the years, and depressing to those of us who actually thought at one point that this state had begun moving away from its dysfunctional and corrupt old-boy ways. It’s clear that the old-fashioned sleaze isn’t gone from the Bayou State at all – in fact, in some respects it’s worse than ever.

Some basics – last year a bill was passed at the state legislature making fantasy sports – fantasy football and fantasy baseball apps like FanDuel and DraftKings, to be more specific – legal in Louisiana. Those apps run contests with cash prizes, and therefore are considered to fall under the ambit of gambling in the wisdom of our lawgivers, and therefore were not legal in Louisiana. Per last year’s bill, fantasy sports went on the ballot throughout the state, and in 47 parishes voters approved legalizing them.

As a result, this year Rep. Kirk Talbot brought HB 459, which is a bill that would provide a regulatory scheme for how those apps and contests would work in the state. The vast majority of the language in the bill is boilerplate stuff you can find in the regulatory schemes of others states where FanDuel and DraftKings operate and there’s nothing much to discuss with respect to it.

But one provision does make Louisiana special. And not in a good way.

Before we get to that, let’s do a quick profile of a character you’re going to need to be familiar with to really understand what’s going on here. Alton Ashy is a contract lobbyist at the Louisiana Capitol known for a rather garish, if not outright obnoxious, sartorial style, a list of clients (which we’ll get to) which some have characterized as belonging under the umbrella of the villainous SPECTRE organization from the James Bond movies – and an airtight connection to Gov. John Bel Edwards. Ashy is considered by many watchers at the Capitol the most powerful lobbyist working its halls, and in fact operates as an unofficial advisor to the governor – something which has been true since Ashy climbed aboard his bandwagon in late 2014 when Edwards as governor was considered a laughably unrealistic prospect.

That close relationship to the governor has netted Ashy a long list of clients. From the Ethics Board’s lobbyist database…

As you can see, while he’s got a number of clients in the health care industry, several of which most assuredly have benefited a great deal by Edwards’ decision to expand Medicaid, where Ashy is really raking in the dough is by representing the state’s video poker truck stop casinos.

The video poker people are starting to become like the nursing home operators and the riverboat pilots, in that whatever they want they get – or else. Ashy can probably take credit for that.

And so for some reason, when the DraftKings/FanDuel thing began to move in the Louisiana legislature, Ashy became “interested” in it. He asked for meetings, we’re told, with proponents of Talbot’s bill, and he began throwing some weight around – including getting himself quoted complaining about “fairness” in a Times-Picayune article back in November. If you’re wondering what on earth fantasy sports competitions taking place online have to do with truck stop casinos, you are not alone, which is why his efforts to insinuate himself into the fantasy sports issue went largely rebuffed.

And then on May 7, when HB 459 had its first committee hearing in from of the House Administration of Criminal Justice Committee, things came to a head. Here’s video from the committee’s debate on the bill…

Yes, that’s Ashy in the purple pinstripe suit. He’s quite believable as the lobbyist for the video poker people, don’t you think?

You can also see why he’s one of the highest-paid lobbyists at the Capitol, because some of those state representatives in that committee had no idea what hit them. Poor Stephen Dwight, who was handling the bill for Talbot (he was chairing the House Insurance Committee which was having a hearing of its own at the time), was essentially run over by a freight train.

Otherwise the reaction would have been that truck stop casinos have absolutely no business making demands on FanDuel and DraftKings, that the demographic profile of video poker truck stop customers (old, poor, female) is almost the opposite of the fantasy sports clientele (young, male, affluent) and that Ashy insinuating himself into this debate was…let’s be kind and call it untoward.

Here was the amendment which passed that committee on a 7-3 vote (there are 17 members of the committee; seven of them weren’t even there, and six of the seven votes were the Democrats – Ray Crews was a yes and got hit so fast he didn’t even know what was happening; he thought he was just making sure the players had to be 21)…

The whole point here is the truck stop casinos would then add fantasy sports contest administration to their repertoire – and have their lobbyist force the fantasy sports apps to contract with them if they want to do business in Louisiana.

The idea that you’d have to drive to a truck stop casino somewhere to fill out your fantasy football lineup on DraftKings, when the whole point of DraftKings is that you can do it on your couch or at the beach or wherever from your phone, is patently absurd. It’s the kind of thing which could only happen in a mobbed-up Third World banana republic s**thole where legitimate business is set upon by bloodsucking political operators connected to the ruling caudillo, and is made to accept its assigned role in the racket.

And it’s exactly what Ashy, with help from Baton Rouge Democrat legislator Denise Marcelle, would have inflicted on the fantasy sports apps and their customers based on the amendment he grafted on to Talbot’s bill.

There is good news and bad coming from this story as it currently stands. The good news is that when HB 459 went to the House floor on Tuesday, Talbot got Ashy’s amendment stripped out and the “clean” bill passed with a 71-27 vote. So as of right now it’s a bill enabling fantasy sports competitions which looks a lot like the enabling legislation in other states.

But the bad news is the bill has now crossed over to the Louisiana Senate, and it’s been assigned to the Judiciary B committee.

You’ve likely seen us rail here about how terrible Judiciary A, the trial lawyer-dominated committee which kills every tort reform bill coming before it, usually is. Jud A is a Swedish massage compared to the sleaze Judiciary B is capable of.

LaPlace Democrat Gary Smith, who has a relative long history as a less-than-salutary operator, chairs Judiciary B. The vice-chair, Ronnie Johns, is the only actual Republican. The others on the committee? Ethically-challenged late-night pugilist Norby Chabert, who is nominally a Republican (but please), gambling addict and behaviorially-challenged Louisiana Democrat Party chair Karen Carter Peterson, New Orleans Democrat and legislative schemer J.P. Morrell, slippery Ville Platte Democrat Eric LaFleur and Shreveport Democrat Greg Tarver. If ever there was a committee tailor-made for Ashy’s shenanigans this is it.

HB 459 goes in front of that rogue’s gallery on Tuesday. If you think Ashy’s amendment forcing FanDuel and DraftKings into bed with Little Deuces and Hollywood Truck Stop won’t go right back on that bill, you aren’t paying attention.