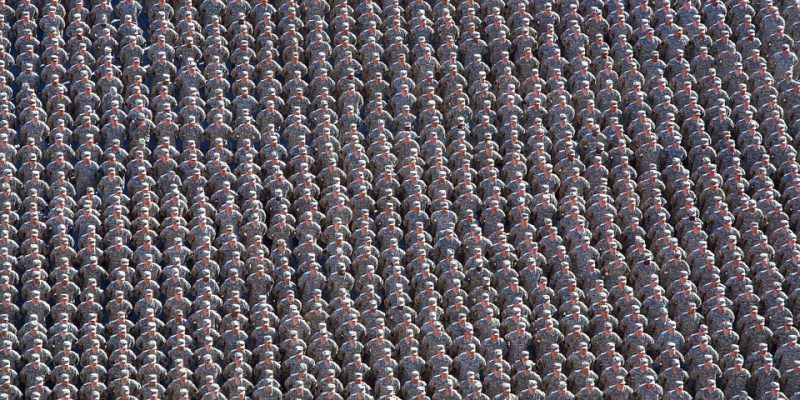 The Big 3 mystified Texas political observers last week with a media advisory of a Friday press conference. No subject was given, and all speculations were on the table including the specter of a special session to handle unfinished business from teh 86th legislature.

Come to find out Gov. Greg Abbott, Speaker Dennis Bonnen, and Lt. Gov. Dan Patrick announced they were committing to send 1,000 Texas National Guardsmen to the U.S./Mexico border to assist with the “escalating humanitarian crisis” there.

It was one of those surprised/not-surprised moments: Echo then-Gov. Rick Perry, who in July 2014 ordered 1,000 National Guard troops to the border.

That there is an ongoing crisis on the border is without argument, though the dynamics seem to be in flux.

Apprehensions peaked at 1.6 million during Bill Clinton‘s last year as president. Border arrests were undergoing a downward trend (81,588 per month average under George W. Bush, when the last round of immigration reforms went into effect catch-and-release began, followed by 34,647 per month under Barack Obama). But under the Donald Trump Administration immigrants traveling with family members alone jumped to 36,174 in January 2019 while others account for around 30,000 that month. According to the latest available numbers, the period from January through May saw 268,000 total apprehensions. There was a peak of 76,000 apprehensions in March 2019 alone, which left around 50,000 persons in temporary custody.

Although U.S. Homeland Security now has the authority to do expedited removals, there is a loophole according to the Heritage Foundation: “If groups are apprehended crossing the border that claim to be family and have children, and submit an asylum claim, they cannot be put into expedited removal. Knowing this to be true, such groups have sought asylum, leading to a dramatic spike in asylum claims” and, thus, an increase in detention centers which liberal mouthpieces have begun irrationally referring to as “concentration camps.”

The consensus is that since Bush 43 there has been no substantive attempt at top-down immigration reform put forth by Congress — only piecemeal administrative policies and state and local efforts. Speaker Bonnen called the National Guard commitment “another example of Texas stepping up and filling in the gaps where the federal government has fallen short.”

There is a glimmer of hope: Though illegal immigration is difficult to pin down in terms of root causes and what works to deter it, it would seem Gov. Perry’s ramp-up of a National Guard  presence was accompanied by a significant drop in border apprehensions. Arrests due to illegal border crossings topped 40,000 in March 2014 followed by roughly 25,000 in March 2015.

The entire joint press release is included below:

Governor Greg Abbott today announced the deployment of 1,000 Texas National Guard troops to assist the Department of Homeland Security (DHS) and Customs and Border Patrol (CBP) with the escalating humanitarian crisis at the southern border. In the past three weeks alone, more than 45,000 individuals from 52 different countries have been apprehended illegally crossing the border into Texas.

“The crisis at our southern border is unlike anything we’ve witnessed before and has put an enormous strain on the existing resources we have in place,” said Governor Abbott. “With the deployment of these troops, we are taking action to confront the crisis at the border and keep potentially dangerous criminals and illegal activity out of our communities. By working together with our federal partners, we will continue to pursue a strong and comprehensive strategy to secure our border.”

In the coming weeks, DHS will establish holding facilities in the Rio Grande Valley and El Paso for single adults entering the country illegally. The Texas National Guard troops will provide supplemental staffing support at the temporary holding facilities as well as supplemental enforcement support at ports of entry. These combined efforts will help alleviate the humanitarian crisis on our border as well as increase security for Texas communities.

“The massive increase in illegal immigration — on pace to exceed a million people this year— has been an emergency for months and Texas must continue to do everything we can to help secure our border, including deploying these additional troops,” said Lieutenant Governor Dan Patrick. “Texas communities along the border and throughout the state are struggling to deal with this huge increase. Our health care system and schools are stretched to the breaking point and cost increases on everything from temporary shelter and policing to street cleaning have been astronomical.  Governor Abbott, Speaker Bonnen and I are agreed that we must work with our federal partners and act now.”

“As a longtime advocate for border security, I support today’s announcement as yet another example of Texas stepping up and filling in the gaps where the federal government has fallen short,” said Speaker Dennis Bonnen. “I have worked with Governor Abbott, Lieutenant Governor Patrick, and lawmakers in past legislative sessions to secure our border and ensure the safety of our citizens, and will continue to support measures to do so as we call on Washington to fulfill their duty to protect our citizens.”

The federal government will pay for 100 percent of the costs associated with this short-term mission.

Today’s announcement follows a series of actions Governor Abbott and the State of Texas have taken in the past four years to secure our border in the wake of inaction by Congress.

Since Governor Abbott took office, the State of Texas has dedicated nearly $3 billion to confront the challenges that exist along our southern border.

The State of Texas has also added 500 permanent Texas Department of Public Safety Troopers to the border region.