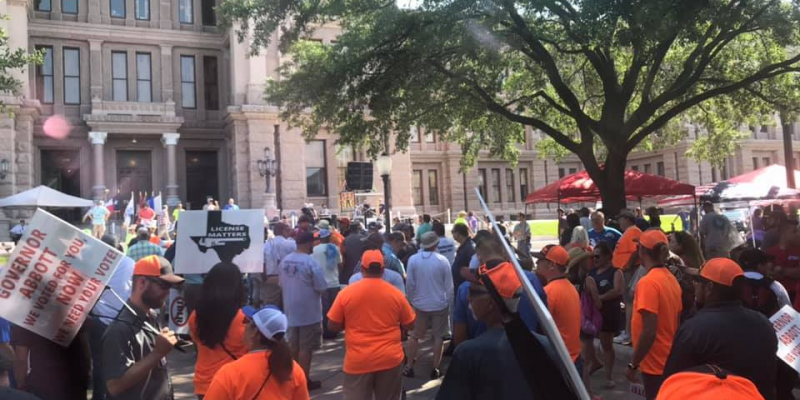 A union-organized Texas Capitol protest to urge the governor to extend the state’s plumbing regulatory board is quickly turning into a thank-you rally.

On Thursday, Gov. Greg Abbott issued a proclamation (see below) linking the failure of the Texas Legislature to extend the Texas State Board of Plumbing Examiners (TSBPE) into the next two-year period.

Chartered buses were driving from TSBPE headquarters to the south steps of the Texas Capitol where unions had organized what was originally supposed to be a mass gathering to pressure Abbott into declaring a special session on the subject. Abbott earlier responded to those calls by saying via social media “we got this,” and hinting at a possible solution.

Many in attendance are still concerned over state plans to roll the TSBPE into the Texas Department of Licensing and Regulation — a catch-all agency for licensing and regulation of occupations.

See our coverage on the legislative end of it here.

By recent count, 15 states do not have state-level plumbing licenses, leaving counties, cities, and the market to handle responsibilities.

A look through several Facebook Live feeds and forums this morning showed a number of plumbers boasting about their licenses — some third- and fourth-generation Master Plumbers.

“This rally is just the beginning of Texas plumbers making our voices heard. It’s in part a celebration that TSBPE has been extended, but also to show that we mean business and won’t let our trade be watered down,” one wrote.

Some conservative grassroots activists have pointed out the possible danger in using disaster emergency powers to perform legislative functions. Others say Abbott has a point in that quality plumbing is a key part of disaster recovery efforts — contaminated water being one of the top concerns following a disaster involving flooding.

Abbott cited SB 285, passed during the recent session, which greatly expanded his power to respond to disasters such as hurricanes.

Here’s the proclamation (we report, you can decide):

WHEREAS, I, Greg Abbott, Governor of Texas, issued a disaster proclamation on August 23, 2017, as subsequently amended on August 26, August 27, August 28, and September 14, 2017, certifying that Hurricane Harvey posed a threat of imminent disaster for certain counties in the State of Texas; and

WHEREAS, on September 20, 2017, and in each subsequent month effective through today, I issued proclamations renewing the disaster declaration; and

WHEREAS, recovery from the catastrophic damage caused by Hurricane Harvey continues for millions of Texans living in no fewer than sixty counties across the state; and

WHEREAS, the magnitude of what still must be rebuilt is reflected in the more than $10 billion of federal funds that are newly or nearly available to Texas for areas impacted by Hurricane Harvey, including through the disaster aid bill signed by President Donald J. Trump on June 6, 2019; and

WHEREAS, a qualified workforce of licensed plumbers throughout the state, including from areas not directly affected by Hurricane Harvey, will be essential as those funds are being invested in crucial infrastructure, medical facilities, living facilities, and other construction projects; and

WHEREAS, Texas must also be ready for future disasters, by building sound infrastructure that can withstand major weather or other events and by ensuring that qualified workers stand ready to rebuild, and June 1, 2019, marked the beginning of the 2019 hurricane season; and

WHEREAS, the Texas State Board of Plumbing Examiners, whose mission is “to protect Texas citizens against the health and safety hazards that can result from improperly installed plumbing, gas, and medical gas systems,” will continue to play an essential role in all these efforts by ensuring that the plumbers who rebuild Texas and prepare for future disasters do so in a manner that will safeguard public health, safety, and property; and

WHEREAS, Section 1301.003 of the Texas Occupations Code provides that the Board is to be abolished on September 1, 2019, along with expiration of the Plumbing License Law, Texas Occupations Code, Chapter 1301, because they were not continued in existence by the 86th Legislature pursuant to the Texas Sunset Act, Texas Government Code, Chapter 325; and

WHEREAS, abolition of the Board would threaten recovery efforts, diminish hurricane preparedness, and heighten the dangers I am responsible for meeting under the Texas Disaster Act of 1975, Texas Government Code, Chapter 418; and

WHEREAS, in Section 418.016(a) of the Texas Government Code, the legislature has empowered the governor to “suspend the provisions of any regulatory statute prescribing the procedures for conduct of state business . . . if strict compliance with the provisions . . . would in any way prevent, hinder, or delay necessary action in coping with a disaster”; and

WHEREAS, the 86th Legislature further expanded the governor’s authority in Senate Bill 285 by enacting Section 418.128(b) of the Texas Government Code, effective September 1, 2019, pursuant to which, “[n]otwithstanding any other law, the governor may, by executive order, take any action necessary to ensure each state agency . . . is able to respond to a hurricane”; and

WHEREAS, to fulfill the demands for rebuilding after Hurricane Harvey and keeping Texas prepared and able to recover from future disasters, it is necessary to continue the Board to perform its indispensable role in protecting Texans;

NOW, THEREFORE, by virtue of the power and authority vested in me by the Texas Constitution and the Texas Disaster Act of 1975, I do hereby suspend Section 1301.003 of the Texas Occupations Code to prevent the imminent abolition of the Texas State Board of Plumbing Examiners and expiration of the Plumbing License Law on September 1, 2019, and to delay that abolition and expiration until disaster needs subside or the 87th legislature addresses the matter. To facilitate the legislature’s consideration of the issue, this suspension shall have the force and effect of law until May 31, 2021.

This executive order supersedes all previous orders on this matter that are in conflict or inconsistent with its terms, and this order shall remain in effect and in full force until modified, amended, rescinded, or superseded by me or by a succeeding governor.