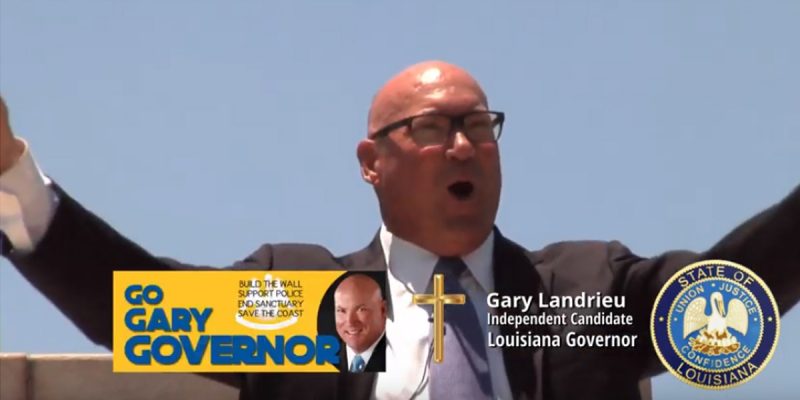 You would expect that either John Bel Edwards or Eddie Rispone, both of whom have in excess of $10 million in their campaign war chests, would be the one to break the glass on television ads in the 2019 Louisiana gubernatorial campaign. And if you were told neither one would be first to the tube, you’d surely conclude Ralph Abraham, with his war chest of around $1 million, would be the answer.

And you would be wrong. Because this is the first TV spot of the campaign to make the airwaves…

And we expect this one will shortly follow it…

This is Gary Landrieu’s media blitz. He’s running for governor as an independent, and he’d sure like your vote. And yes, he’s one of those Landrieus, but he’s not Mitch and Mary’s brother. He’s a cousin. Mitch actually once said of Cousin Gary, “Everybody’s got a crazy relative” – which was a bit rude, to be sure, but he said it after Gary had made news by attempting to drag a woman, who may or may not have been a prostitute, by her hair as he drove away in his truck – a stunt which got him arrested for aggravated battery. Cousin Gary has run for office regularly, most recently in the 2016 primary for the U.S. Senate. That year Landrieu managed 45,000 votes for a two percent share in a 24-person field. In 2012 and 2014 he ran for Congress against incumbent Cedric Richmond, earning 25 percent and 17 percent of the vote, respectively, in those two races.

And now Landrieu is making his biggest electoral play yet. He’s already put up billboards, including one on I-10 heading west into downtown Baton Rouge, emblazoned with the “Go Gary Governor” logo. Landrieu apparently isn’t concerned that people will think his name is “Gary Governor” when they go to the polls.

And now he’s up on TV in the New Orleans market. That follows a segment he did on Jeff Crouere’s show which was…interesting.

The funny thing is that nothing he says in the two ads is factually wrong. He’s right that the people leading the charge to knock down the confederate statues in New Orleans, a train his cousin Mitch jumped aboard when the latter was the city’s mayor, are communists. We’ve had multiple posts here at The Hayride discussing Malcolm Suber, the head honcho of Take ‘Em Down NOLA, and the fact he’s a committed communist. And he’s right that unchecked illegal immigration is reintroducing diseases like the measles which had been eradicated in Louisiana (though the anti-vaccine crowd also bears responsibility for our new and unwelcome public health challenges).

But he’s got a way of making statements like those sound absolutely deranged. Which suggests a certain lack of basic political skill. You’re supposed to sound measured and reasonable rather than unhinged.

So no, we’re not of the opinion this is Cousin Gary’s breakout year.

That said, Landrieu could definitely affect this race.

We can all agree that despite his message of defending monuments and banishing disease-ridden illegals, no Republican is going to vote for anybody named Landrieu, can we not? Therefore whatever vote Cousin Gary gets will not come at the expense of Eddie Rispone or Ralph Abraham.

What he’s going to get is Democrat votes. Predominantly in New Orleans.

And we know he’ll likely get more than the two percent he got in the 2016 Senate race, because of the name. Landrieu himself said earlier this year that he has “$50 million in name ID” as an asset to his campaign. That does matter, as we saw last year: some guy named Thomas Kennedy, who didn’t spend a nickel on his campaign for Secretary of State, ended up with nine percent in the primary. People saw “Kennedy” on the ballot and thought he was John Kennedy, or close enough to him to satisfy them, so that’s who they voted for.

And those were probably a little more sophisticated voters than the ones who might be attracted to a Landrieu.

The guess here is Cousin Gary is going to begin showing up in polling, assuming he’s added to the list when pollsters next go into the field, in the five to six percent range. And the guess here is that’s about how he’d end up doing on Election Night.

And if he does that, he’ll be responsible for holding John Bel Edwards in the low 40’s, where the incumbent might become dangerously close to finishing second should one of the Republicans finish far ahead of the other.

If Landrieu was really politically savvy, he would come out as pro-choice and start bashing Edwards for signing the fetal heartbeat bill. Were he to do that he’d have an opportunity to perhaps climb into the teens, capitalizing on the angst among the Democrat base over Edwards’ pro-life stance, and at that point Edwards really would be in danger of finishing second in the primary.

That’s not our expectation, though. We haven’t seen quite that level of moxie from Cousin Gary just yet. As to those statues and the sick illegals, though, he’s rolling.