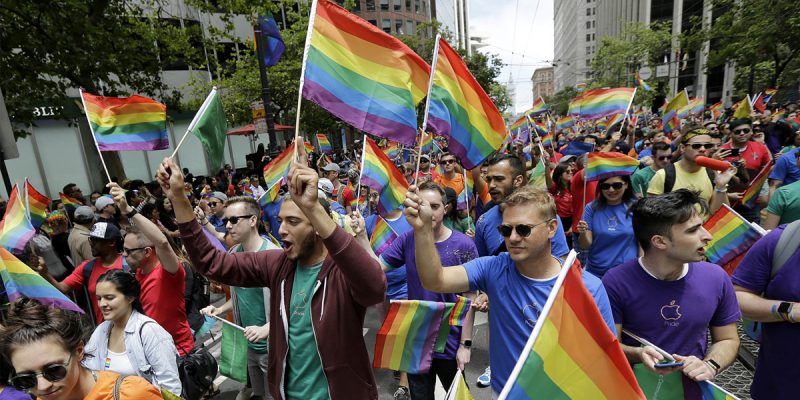 If your head won’t stop spinning as you watch the tailspin of American culture away from its Judeo-Christian Western middle-class foundations, this story won’t be for you. Behold, LSU’s new “LGBTQ” minor program debuting this fall…

Starting this fall in 2019 LSU has launched a new, 18-credit-hour LGBTQ minor program.

Associate professor Elaine M. Maccio, designed the program. Maccio, currently works in the School of Social Work for the university.

“A few years ago, I recognized in LSU’s curriculum a paucity of courses on sexuality in general, and a gap regarding LGBTQ – lesbian, gay, bisexual, transgender and queer – topics in particular,” Maccio said.

Last fall Maccio ran a pilot of the program’s core course, and Introduction to LGBTQ Studies to gauge students interest. Maccio then pitched a proposal curriculum and received approval from the Faculty Senate Courses and Curricula Committee last November.

Damon Andrew, Dean of the College of Human Sciences & Education, said the minor courses derive from multiple disciplines. Those disciplines range from sociology to political science to theatre.

This is to help examine LGBTQ issues through multiple lenses, including race, religion, class and disability.

Editor’s Note: Wednesday evening we got a message from Ernie Ballard, LSU’s spokesman, who noted that WAFB pulled down their story on the LGBTQ minor because it actually went live in 2014 – which was about the time LSU president F. King Alexander began bleating about the school going into academic bankruptcy. So while it might be old news and this curriculum has been around a while, the understanding this has been going on for five years should probably make Alexander look even worse.

Let’s make sure something is understood here – this isn’t an attack on homosexuality. Whatever you want to do with your sex life is up to you and we’re not interested in analyzing, criticizing, commenting on or even knowing about it.

The question is whether an LGBTQ studies program at LSU represents “progress” for the university, as the WAFB article unquestioningly asserts, and more importantly whether such a flimsy academic curriculum is a proper receptacle for public funding.

Elaine Maccio has a Bachelor’s degree in Psychology/Sociology from the Rochester Institute of Technology, a MSW degree (Master’s in Social Work) with a concentration on alcohol and other drugs from SUNY Buffalo and a PhD in Social Welfare from SUNY Buffalo. She’s been a college professor for 15 years. From her LSU bio…

Dr. Maccio’s research and scholarship focuses on lesbian, gay, bisexual, and transgender (LGBT) people and the issues that affect them. As such, she was invited to serve as an ad hoc reviewer for the prestigious Journal of Homosexuality and collaborate with runaway and homeless youth (RHY) expert Dr. Kristin Ferguson-Colvin (Hunter College) on a RHY service provider’s toolkit commissioned by the National Resource Center for Permanency and Family Connections.

Over the past 15 years, Dr. Maccio has taught 23 different courses in 18 content areas at the undergraduate, graduate, and doctoral levels. Her teaching interests include LGBT issues, cultural diversity, mental health diagnosis, and social work practice. To that end, she has developed three undergraduate courses and one graduate course, as well as the LGBTQ Studies Minor.

With a reputation for promoting social justice, Dr. Maccio has been called on by the LSU Law Center’s Immigration Clinic to write affidavits for asylum-seeking LGBT individuals from countries that persecute their LGBT citizens. She continues to work for domestic partner benefits at LSU, getting a Faculty Senate resolution passed and finding sponsors for similar Staff Senate and Student Government resolutions that also passed. She also founded the annual Equality March, Baton Rouge’s first and only march for LGBT rights.

During her time at LSU, Dr. Maccio has received a dozen honors and awards. The LSU College of Human Sciences and Education’s Advocate for Diversity Award, the University at Buffalo School of Social Work’s Distinguished (PhD) Alumni Award, and the LSU Information Technology Services’ Torchbearer Award for Leadership in IT Advancement are among her most recent recognitions.

So this is precisely what it appears to be.

Who here thinks that LSU’s LGBTQ studies minor will contain the same academic rigor that, say, its Microbiology, Geology or Petroleum Engineering curricula will? Exactly. It won’t. This is a collection of crip courses designed for the sole purpose of attracting a “diverse” student body and keeping its tuition dollars.

And maybe that works for LSU – or maybe it doesn’t, because at some point there will be donors to the university who will rethink whether the money being spent out of their bank accounts to support the university really serves the general well-being when it ends up promoting the agenda of people like this…

Q, 44, chatted with HuffPost about how they use their work to highlight underserved communities, how they understand BDSM’s role in exploring and furthering queer pride and how they envision the future of the LGBTQ movement.

Tell me more about how one of your sessions actually works.

What I’m doing is actually just offering my skills and services to be the hand that puts someone into bondage, to hold safe space for them ― not to prod or poke them. It’s more that they would take a flogging for themselves, so if they’re going to take a really hard whipping, it’s so we can manifest something, or go with the intention that they’re trying to get through some kind of struggle ― whether it be work-related or any other part of their lives where they feel they need that physical push, much in the way someone might, say, run a marathon.

For people to feel safe. The last time I looked on FetLife [an online community for people with/interested in fetishes and kink], within the hundreds of different identities and fetishes you can check off in terms of negotiation, there were still so many heteronormative identifiers that didn’t have the other queer identifier that would be part of them. There was something for “Daddy Girl” but nothing for “Daddy Boy.” It’s absolutely important to create spaces to uphold the most marginalized voices and identifications, to create space where people can feel comfortable. It’s already so hard ― maybe not so hard anymore ― but it used to be hard to come to this idea of comfort with one’s own queer sexuality and then saying “OK, I’m also kinky and queer” along with all the other marginalized identifications.

What impact have you seen the workshops have on the people who attend them?

I was holding a lecture at the Women of Color in Solidarity conference last year, and we were talking about kink and consent. There was a queer black woman in a wheelchair there who said, “You know, this is the first time I’ve ever said out loud that I want kinky sex,” and there were tears in her eyes. It was so great to be able to create that space for someone to have a human moment of self-affirmation like that.

Sure, sure – that’s far out on the fringe and LSU won’t EVER have this kind of thing as part of its academic curricula.

I feel like the younger queer generation ― whether they’re into kink or not ― are able to see [kink] without being horrified or like their identity is going to be repressed. I know there are so many people within the older generation of the LGBTQIA community who really didn’t want anything to do with the leather community. They really wanted to separate themselves from it to show they are family-oriented, to show they’re “normal” ― part of corporate America, which is how we got into the more corporate version of Pride. The generation that’s younger than me is embracing [kink/BDSM] and are much more likely to be activists in upholding an array of progressive idealisms.

So you believe embracing kink and other marginalized identities has the power to move the conversation and experience of Pride beyond the white, gay, cis, male one that has mostly dominated the movement up until now?

I think the corporations that are fueling the money that goes into Pride and the people getting paid [by those corporations] need to turn and understand they got over the fence by so many people giving them a hand up over it. They didn’t achieve gay marriage and equality of queer people in the workplace on their own. We need to remember how much privilege we attain and we always have to look to our neighbors and people outside of our spaces to see who else needs a hand up to get into that space so we can all be at the party.

Why do you think the movement has been so slow ― and even resistant ― to include more and different kinds of people and identities?

I was talking to an older gay white man after Pride last year who was really offended or hurt that there were a lot of leather flags with a black stripe in them to show solidarity with Black Lives Matter. He confided that to me, and I listened because he’s an ally to BLM but he felt insulted that his own history of what the rainbow flag had meant to him had been changed and mutated in a way that he felt was not giving reverence to Gay Pride. I feel like there’s this idea that every move forward has to have a change. Personally, I’m so glad to see a black stripe through the middle.

Things have to change. Our language has to change. And it can be jarring to keep up, and it can be hurtful to keep up and to see that maybe some part of our history is being forgotten by the younger generation ― but that being said, the younger generation is taking up arms to hold up more marginalized folks. There are plenty of rainbow flags out there. Those aren’t going away. Stonewall happened at the instigation of a black trans sex worker, not a gay white male, and that history has been erased.

All of this is fueled in the universities, and LSU is now in the game. And your tax dollars are funding it.