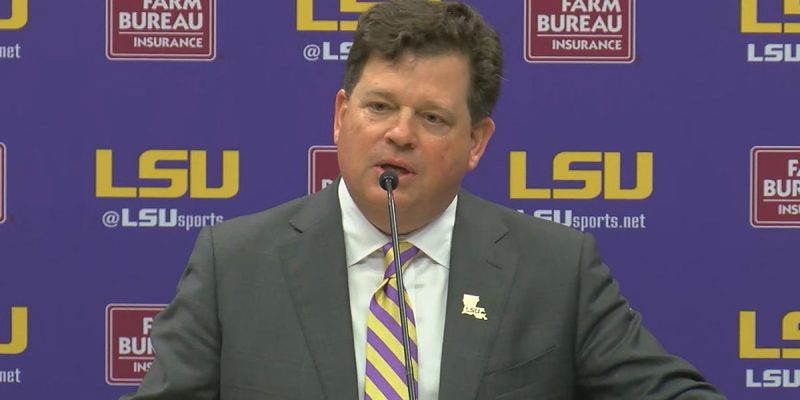 If you’ve been under a rock, or you’re not in Louisiana, you might have missed the announcement by LSU athletic director Scott Woodward that the athletic department is terminating its policy of writing an annual check of $7-10 million to the university’s academic side each year. That revelation has generated no small amount of discussion, particularly coming as it does a week after the controversy that erupted over LSU’s reveal of its new, lavish $28 million football operations center.

Times are changing around LSU athletics, as with a new athletics director comes new policy.

And one new policy change under LSU’s new Athletics Director Scott Woodward will affect the university his department is connected to directly.

Under an unprecedented fund-transfer policy initiated by former LSU athletics director Joe Alleva, the LSU athletics department contributed millions of dollars to the academic institution that is LSU. Between 2012 and 2017, LSU athletics contributed nearly $50 million to the university under this policy despite the initial guarantee being just $36 million during that time.

“It’s something that’s very dangerous, when universities rely on recurring money, especially from an auxiliary like the athletic department,” Woodward said. “So no, I think, while I will always support the university in some form or fashion, we can not sustain what we’re currently doing.”

Woodward confirmed his belief that it’s not the athletics department’s responsibility to bail a state school out.

He also eschewed any responsibility the Tiger Athletic Foundation might have to incentivize donors to donate to the LSU Foundation or the LSU Alumni Association.

“I think that’s the wrong question,” he said when asked about that possibility. “I think the right question is ‘What are our current donors at TAF doing for the university?’ And I have a feeling that… in both places I’ve been (Texas A&M and Washington), on average they give 1.5 times more to the academic side. I’m sure that’s the case here.

“You can’t just bifurcate or trifurcate our donors as TAF donors or LSU Foundation Donors or Alumni Association donors or Ag donors or whatever kind of donors you want to put in. You get a cross in all sorts of ways. We feed off each other, and it’s a very healthy, positive thing.”

This is the single most demonstrative example to date of the difference between the Joe Alleva Era at LSU and the new direction and leadership Woodward is offering. Alleva never would have had the sand or the stroke to put an end to what was essentially a bribe the athletic department was paying to the university for the privilege of carrying LSU’s standard into competition with its rivals.

Yes, the LSU athletic department, with its $150 million per year or so in annual revenue, receiving no state funds, generates an absurd amount of money. This happens because LSU’s athletic teams are generally among the best in the country and carry an extremely high standard of performance, and people are willing to pay for excellence.

This is why LSU found it relatively easy to raise the $28 million for the new football operations center, complete with its mind-blowing locker room and player’s lounge and other facilities, while other projects on campus not affiliated with the athletic department have been less successful in finding donors. Many of those facilities support programs at LSU which are not nationally competitive and do not have the level of support from alumni or the business community around the state or elsewhere.

LSU’s athletic endeavors, after all, are a factor in the economy of South Louisiana. They draw tourism to both the Baton Rouge and New Orleans markets, they support a decent piece of the retail trade, bars and restaurants usually get a bump from LSU sporting events when they’re good, and so forth. That isn’t true with respect to the journalism or sociology schools.

And of course, it’s typically the people affiliated with such programs who have been doing all the whining about the money flowing through the athletic department.

Their argument holds that since athletics is a peripheral thing to the university’s mission and education is central, educational pursuits should be paramount in the prioritization of resources.

Is LSU’s journalism school nationally competitive as, let’s say, the football or baseball team are? No.

We’ve been looking for LSU journalism students to bring aboard at The Hayride for years. We’ve yet to find one worth hiring. (Hint: if you’re a journalism student at LSU and you’re resistant to left-wing indoctrination and have interest in writing for us, we’ll happily talk to you about opportunities.)

Meaning that when Bob Mann, who makes a six-figure salary as an endowed professor in the LSU journalism school, whines about having to vacuum the carpet in his office while the football program gets $28 million upgrades to its facilities, it’s worth asking the question Mann received from LSU’s quarterback Joe Burrow – namely, what gives Mann the right to Burrow’s work product?

Is journalism more important than athletics?

Perhaps your knee-jerk reaction is “Of course it is.” Journalism is, after all, necessary to having an informed public and crucial to the preservation of our First Amendment rights.

Most of us are on board with that. The question is whether you need journalism schools to have journalism. You don’t have sales schools in American colleges, for example, and you have people in sales. The heyday of American newspapers was a time when the vast majority of reporters weren’t college graduates at all, much less graduates of journalism schools.

And most everybody would agree that journalism is an industry in the middle of a major decline, largely because the mainstream media has become hideously one-sided in its political bent and increasingly (1) unmoored from facts and context and (2) nakedly partisan in its presentation of content. The majority of the people who have triggered that decline in journalism are graduates of journalism schools.

You don’t often hear about a lack of resources for LSU’s construction management school, or its engineering department, or its internal auditing program. Why? Because those departments compete at a high level nationally and are thus able to raise money from employers and alumni as a result of their strong work product.

So how important is it that tax dollars and/or private donations flow to Bob Mann’s department vis-a-vis the LSU athletic department?

After all, LSU’s athletic department trains students to, in some cases, make millions of dollars straight out of college. Take the LSU basketball program for example – it had 10 scholarship players on the roster at the end of this past season, and three of them are now in the NBA. Two of the three, Naz Reid and Tremont Waters, will be millionaires well before they turn 25. LSU’s baseball team made Josh Smith just shy of a millionaire when Smith signed his pro contract earlier this summer, and former Tigers like Alex Bregman, D.J. LeMahieu, Aaron Nola and Kevin Gausman are obscenely highly-paid.

And this fall there will be something on the order of 50 former Tigers populating NFL rosters, almost all of them with seven-figure salaries or more.

No graduate from LSU’s journalism school can claim that kind of success. It’s worth asking whether LSU would even be less of a university if there was no journalism school and its resources were used for something else. Psychology and marketing majors could easily learn the skills to earn jobs in journalism, and might even have a better knowledge base in many cases – meaning LSU would likely serve the community just as well.

And we’re supposed to believe somehow that it’s a case of mislaid priorities for the athletic department to get and keep those resources?

What Woodward didn’t say was that the athletic department would never cut checks to the academic side again. He just stopped guaranteeing it. Which is smart, because Woodward needs those resources for his own purposes.

Take the men’s basketball program, for example. Head coach Will Wade took a team that was 2-16 in the SEC and in two years won the conference’s regular season championship with a 16-2 record. He did that despite being villified by a Yahoo! Sports report from a writer with a bias favoring a competing program alleging recruiting violations in a supposed leaked transcript of a federal wiretap which was not entered into evidence in the Adidas trial. The ordeal which followed led to Wade’s suspension from postseason play, something which was not a good look for LSU’s university administration and coincided with the ouster of Joe Alleva from his post as Woodward’s predecessor (it isn’t known, though it’s suspected, that the Wade situation played a role in Alleva’s departure). By all appearances, LSU’s internal review of those violations didn’t turn up any particularly compelling evidence that he’s done anything wrong or that the program is dirty. The NCAA is conducting its own investigation, but LSU is only one of a host of programs for which that is true. All that we do know is LSU is now a top-tier SEC and NCAA program with a conference title and a Sweet Sixteen appearance under its belt.

Wade is trying to capitalize on that success in recruiting to fully build out his program. But to do that he needs facilities competitive with the programs he’s competing against. Specifically he’s looking to upgrade its practice facility, because when that facility was built a few years ago it was ridiculously badly designed. It has no office the coaches can bring players into – the office is a block away at the Athletic Administration Building, meaning to have a private conversation with a player Wade would have to bring him across the street away from the practice facility, perhaps even in the rain, and waste 10-15 minutes in transit.

Wade took the job at LSU on the assurance from Alleva something would be done to fix that deficiency. He’s about to enter his third year as the coach here, and nothing has been done – in fact, only 25 percent of the fundraising for a facility upgrade has been done. Some of that shortfall probably comes out of Wade’s suspension and the Yahoo! Sports ordeal, in which case one might argue it’s self-inflicted. But Wade needs what he needs, and if he doesn’t get it and some other school comes calling he might well jump, if he feels promises made to him haven’t been honored.

Meaning Woodward needs to prioritize his own department before he can stroke checks to the J-school or the sociology department or the African-American Cultural Center. And kudos to him for standing up for his own constituency and utilizing the resources they themselves produce for their benefit.

And if the money-grubbers on the academic side, who don’t operate with the accountability of the LSU athletic program – where losing coaches get fired and where players who don’t meet high standards don’t get their scholarships renewed – don’t like it, then let them learn how to compete on high levels. It isn’t like LSU’s academic resource base isn’t richer than ever; go look at tuition now compared to 10 years ago.

Interested in more news from Louisiana? We've got you covered! See More Louisiana News
Previous Article There’s Nothing Wrong With Trying To Buy An Election
Next Article SADOW: NW LA Taxpayers Set To Lose More On The Independence Bowl