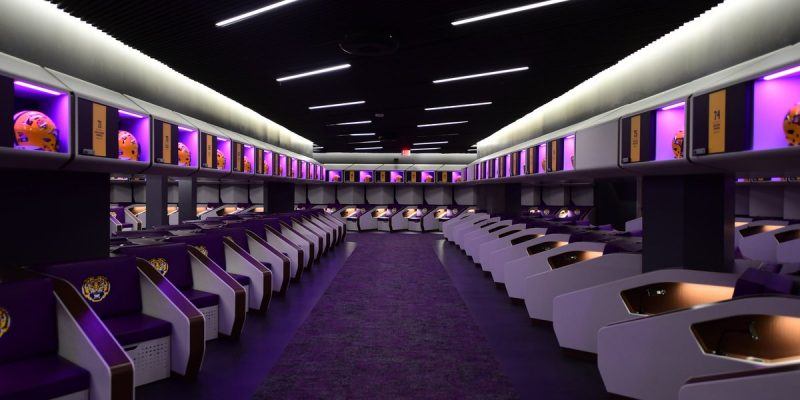 The extravagant $28 million upgrade to the LSU Football Operations Building, which includes some rather amazing new facilities for the players, was unveiled today – and the reaction to the locker room was a bit less positive than one would have expected.

There are locker rooms… And then there's the #LSU locker room pic.twitter.com/3f7FG8QDu8

We could go through the responses to the announcement, but they generally lined up along a few narratives which are not factual.

First was whining that LSU can afford such a lavish football locker room and yet the players don’t get paid.

That’s a dumb argument, of course, because LSU isn’t in a position to decide whether to pay the players. The NCAA governs whether the players get paid, not LSU. What LSU can do for the players within the NCAA rules is give them the best possible facilities, equipment and amenities. And that’s what the new football operations building, which is the place they’ll be doing their day-to-day work as they prepare to play games in the fall, represents.

Second was a complaint that LSU doesn’t have academic facilities and libraries and so forth which are as nice as the football operations building.

Here was an example of that from our old pal Bob Mann, who offered a characteristically stupid take whining about his own amenities…

Meanwhile, across campus, I vacuum my faculty office with a Dust Devil I bought at Walmart. https://t.co/fsVSPhmsOO

There is a reason Mann was fired as a Times-Picayune columnist and not picked up by any other publications as a regular contributor. It turns out people don’t really respond all that well to entitled bitching. Mann, after all, makes a nice chunk of cash – well into the six figures – for not that much work.

You have to teach more than one class and a lab to get a full size vacuum.

Mann qualified his statement by saying he doesn’t begrudge LSU Football its resources but lamented that the university doesn’t make a similar commitment to its academic success.

To which the response is “cry me a lazy river.”

LSU quarterback Joe Burrow shredded Mann in a tweet which he soon took down, but the damage had been inflicted… 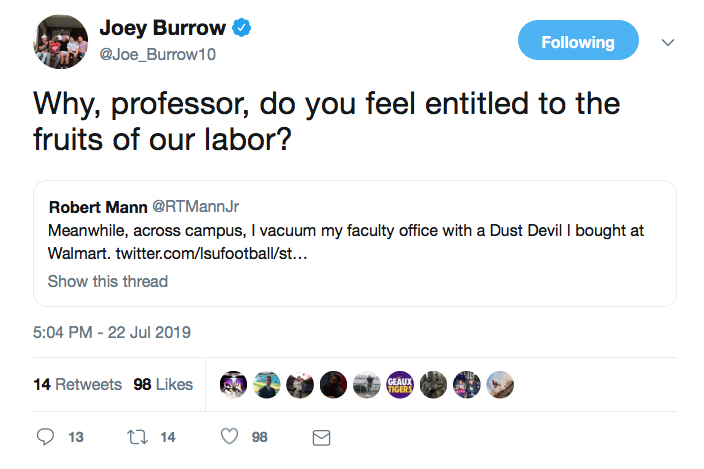 So to complain about priorities at LSU, as though there is some either-or proposition between athletics and academics and that if the athletic program gets nice things somehow that comes out of the mouths of poor students and professors across campus, is an affront to the facts.

Bob Mann has never had a problem with affronts to the facts.

But someone should challenge him on his tirade complaining about amenities given primarily to young black men, often from disadvantaged economic backgrounds, if it’s his position that those amenities come at the expense of privileged people of pallor in the university’s academic community. There is a paucity of minority students in the LSU journalism school, after all, compared to the state’s population, and that also applies to its faculty.

You would think that, given Mann’s never-ending harangues accusing everyone not a leftist Democrat like he is of racism, he would be more generous and grateful for the opportunity to push his store-bought Dirt Devil around his office rather than complaining that someone of the janitorial staff, likely a person of color, is not made to service his carpet more often.

And one more point ought to be made here, which is that if Bob Mann was anywhere near as good at his job as Joe Burrow is, perhaps he might have less to complain about. Burrow is under a great deal more scrutiny, and is subject to infinitely more accountability, than Bob Mann has ever been.

Mann is, after all, the imbecile who came up with the strategy that Kathleen Blanco should blame the state’s poor response to Hurricane Katrina on George W. Bush – and after that strategy blew up in Blanco’s face to such a colossal extent that she couldn’t even run for re-election, Mann was able to fail into a cushy $140,000-per year sinecure teaching political communication at the LSU J-school, in a perfect embodiment of the old saw that “those who can, do, and those who can’t, teach.”

If Burrow were to fail so catastrophically it’s highly unlikely he’ll find himself the recipient of a six-figure salary and a house in College Town for life.

There were other idiots. Dick Vitale, who has been on the warpath against LSU and its fans since he decided to use Will Wade as the poster boy for NCAA violations in college basketball, tweeted a whiny message complaining that LSU’s locker room gets a $28 million upgrade but he struggles to raise $5 million to support kids with cancer. That set ESPN 104.5 host Charles Hannagriff off on a legendary rant against Vitale on the radio in Baton Rouge today, which you can hear beginning at the 24-minute mark at this link. To which we would add that while the V Foundation that Vitale is shilling for is unquestionably a good organization, it is also not the only charity supporting kids with cancer and in the aggregate those charities (Shriner’s Hospital and St. Jude included, for example) raise infinitely more money than LSU athletics does, and the level of entitled arrogance that suggests there is somehow an either-or competition for those resources wherein Vitale’s fundraising struggles are LSU’s fault is not a good look.

What these all boil down to is the widespread fallacy that because LSU has the resources to invest in a lavish football locker room facility somehow those resources can be better spent elsewhere – that financial resources are a zero-sum game and anyone who gets ahead closes off the possibility of others doing so.

That’s a dangerous bit of stupidity, and it belies a Marxist mindset which needs to be drummed out of the public discussion.

Your life is not worse off because LSU built a nice locker room facility with money donated willingly from private donors, one of whom was Tyrann Mathieu, who played at LSU and nearly won the Heisman Trophy in 2011 before going on to a very successful NFL career that has made him tens of millions of dollars. It gave Mathieu, and the other donors, pleasure to fund this facility, and you are not entitled to direct their financial decisions. It is their money, and not yours.

And if you believe that kids with cancer or Bob Mann’s dirty carpet or the aesthetic condition of the LSU library are more important priorities than the football locker room, then you are free to use your own money toward those causes.

Otherwise, shut up. Please. And we’ll see you in Tiger Stadium this fall (or not).