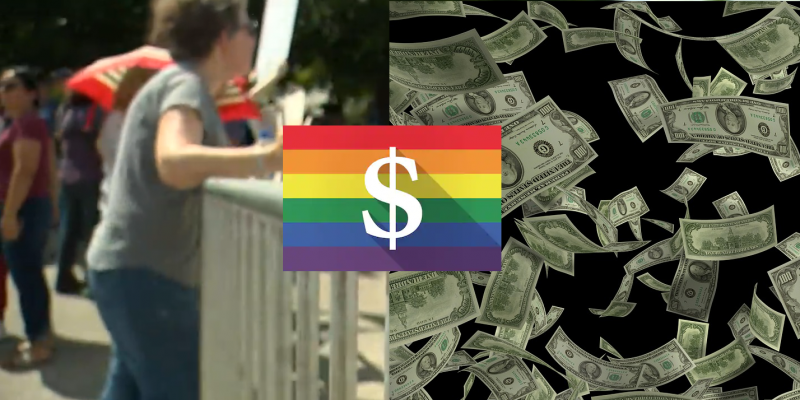 A recent dust-up in the Austin, Texas, area involving yet another drag queen story time for young children is a classic example of “why we can’t have nice things.”

The public library in Leander, a small-town-turned-suburb of about 40,000 residents half-an-hour north of Austin, agreed to host a local performance affiliated with the national Drag Queen Story Hour movement in June during a city-sponsored art festival. After some changes in scope and strategy, the event drew its share of supporters and protesters, along with a substantive police presence and putting several private events hosted in city-owned facilities on ice.

Long story short: members of the community were outraged, contacted city council members, and it was canceled. A similar, private event was booked for a meeting room at the library (sponsored by a local church with a minister who prays to a “mother God”). After questions arose about the criminal background of the drag queens planning to read stories to children, the event was retooled into a more generic Family Pride Festival, in which a Leander City Council member read a book concerning homosexuality to children and parents. The private event drew a sizeable protest, and the library closed for the entire day.

The untold story, though, was how much was spent to keep the protesters in line: Over 700 man-hours and $20,300. The chart below lays out the specifics (click here for a clearer look at it). 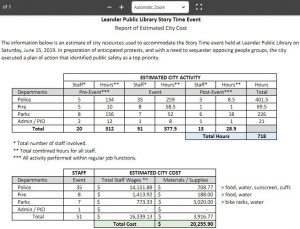 Tim Kelly, a City Council member in neighboring Cedar Park, observed the event and stood in the demonstration area. He pointed out radical left groups like Antifa were promoting the event, which increased the risk factor for attendees.
Others said they were worried protesters would create an dangerous environment for attendees. The protesters greatly outnumbered those inside the building for the private, ticketed event. There were roughly equal numbers of protesters for and against the event, as well as some observers such as Kelly and two fellow Council members.

The Leander library closed for the day, police erected steel barricades, and a police command observation tower was put into place for the event. Protesters were given designated areas to demonstrate. A more conservative church rented a nearby facility to simply pray, but lost its ability to host Sunday services in a library meeting room until the city reviews its events policy.

Leander city staff and Council members are currently evaluating the new policy for the approval of library events. The library is managed by a private contractor, Library Systems and Services, LLC.