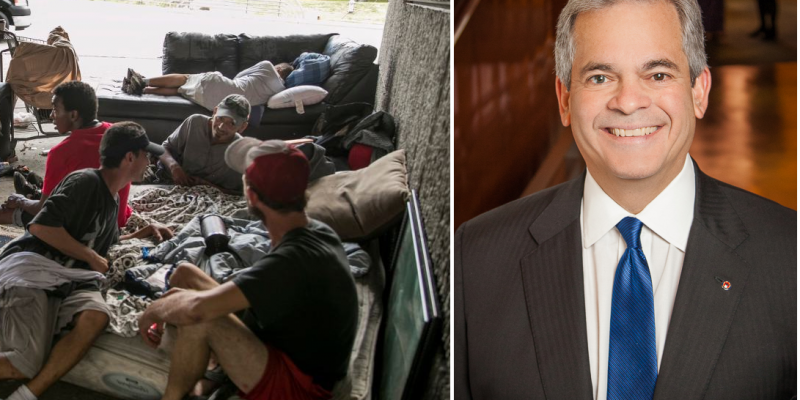 The solidly liberal Austin, Texas, City Council and Mayor Steve Adler rolled the dice on its homelessness policy this summer.

Before going on vacation, the City Council lifted regulations which prevent camping in public places — the wildly unpopular “homeless camping ordinance” which led to the rise of what are being colloquially referred to as “Adlervilles.”

Since then, there has been an explosion of homeless camps at highway underpasses, in front of public buildings and businesses, on pedestrian rights-of-way, along with a sharp uptick in violence — particularly near the city’s downtown homeless resource center, but in places this activity has never been as-prevalent before.

This comes on the heels of controversy over opening a second, $8.6 million homeless shelter in largely residential South Austin. But that’s not where the plans stop. At the last Council meeting (June 20), according to Community Impact News each of the city’s 10 Council districts are expected to have a shelter in the near future:

“Although the mayor and City Council members acknowledged the difficulty of the subject, they maintained its necessity. They came to the defense of [Council member Ann] Kitchen, praising her advocacy for homeless resources and her bravery for being the first council member to accept a new homeless shelter in her [South Austin] district. Mayor Steve Adler said every City Council member would have a day similar to Kitchen’s, as shelters will need to go in each council district if Austin wanted to make progress on its homelessness crisis” [emphasis ours].

In the meantime, there is chaos and bipartisan outrage, Travis County Republican Party Chairman Matt Mackowiak pointed out — who had waited his turn to speak in the Council chambers since 10 a.m. Thursday during their August regular meeting. Finally speaking around 12:30 a.m. Friday morning, he announced that a petition to rescind the homeless camping ordinance has gathered more than 23,000 signatures.

Meeting some opposition from ultra-liberal City Council member Greg Casar, Mackowiak said he does not personally oppose the concept of decriminalizing homelessness, but that the current policy has created obstructed public rights-of-way, unhealthy conditions (garbage, human waste, etc.), and could potentially discourage tourism to what is billed as the Live Music Capital of the World, particularly the Austin City Limits Festival which begins in nine weeks.

“I am truly concerned this violence is going to get worse,” Mackowiak said. His full remarks may be viewed here, and an op-ed he wrote for the Austin American-Statesman may be read here.

From the hip: a “homeless czar” is expected to take office on Sept. 9. But over the course of the summer and the Council’s usual July recess, the city’s homeless population has become much more visible. And that’s perhaps by design.

Whereas in months before, the city’s homeless population was visibly centered around the downtown shelter, it is now visibly scattered throughout the city — along with the requisite safety and health issues noted above. Previously, homeless camps existed in wild areas and undeveloped pockets of town and were mostly unseen except for the homeless visibly stationed around the downtown shelter, the Salvation Army night shelter nearby, as well the successful Community First village in far east Austin.

There seemed to be a strange sense of disappointment that the homeless population was not as high as Mayor Adler expected. The census had increased by only 108 homeless persons since 2018. This is certainly not enough of a crisis to beat the drums for a new shelter in every geographic district of the city.

Thus Mayor Adler’s recent gambit is becoming clearer: his administration is using this moment-in-the-sun — under a unanimously liberal Democrat Council — to take on some public relations damage in order to spread public awareness of the homelessness issue. The visuals of homeless camps even in the far-flung reaches of the city’s territory could bolster future plans and balloted bond proposals to build 10 shelters throughout the city and full physical and mental health services for anyone. We can expect the homelessness czar to roll out these proposals relatively soon.

Or it could all backfire.

It will soon fall to Austin voters whether to retain or reject the current city council for this risky gamble.