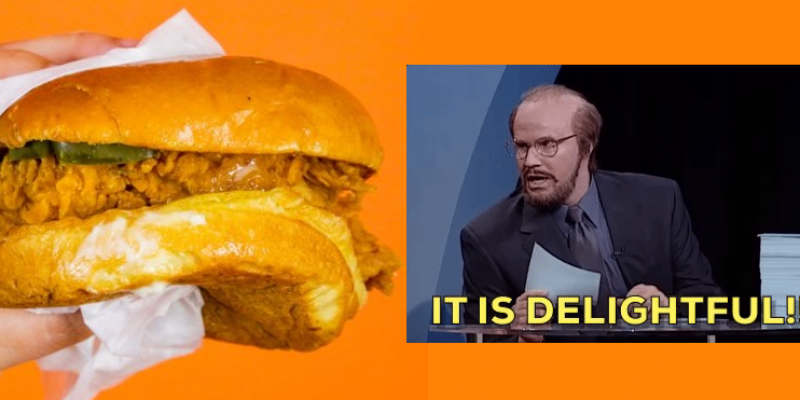 “There is almost certainly better fried chicken in the world than the version found at Popeyes, but only marginally so.”

Now that’s some cheep talk. It’s the kind of overstatement you might expect to find in the Culture section of your average small-town shopper — the ad-heavy newspaper reporter/editor just happy to have a new fast food option in town and hungry for some new advertising.

The statement was from (are you ready for this?) …

… none other than The New Yorker Magazine — that herald of high culture and snooty gravitas that would typically avoid any establishment with a grease trap out back.

The New Yorker is hailing fast food and its new sandwich option as the cock of the walk. Corporate chain fast food sandwiches, at that. Delicious chain grub, yes, with its original corporate headquarters based in the crucible of Southern fried dishes. But still, fast food.

And the New Yorker isn’t alone, with rave reviews for the sandwich coming in from many publications and reported shortages in Manhattan and other foodie destinations.

Now there has to be a reason for the New Yorker’s uncharacteristic extolling of the virtues of Popeyes’ newly released chicken sandwich — containing chicken meat “whose recipe was cultivated by enslaved Africans in the South, is, at its best, a food of transcendent deliciousness, an object of near holiness,” “an ineffable, irresistible gestalt,” and having “ascended to the pantheon.” Born of virtuous slaves, philosophically hip, and worthy of inclusion in a pagan temple: that’s about as holy as it gets for The New Yorker.

What makes this entry more mysterious is that this isn’t Popeyes’ first rodeo with a chicken sandwich: their chicken po’ boy was a menu favorite until being discontinued sometime in the mid-oughties in most locations.

But let’s stop for a second and think about how ridiculously uncharacteristic The New Yorker’s crossing the road to fast food fawning has become. Imagine this scenario: being called by a reporter from The New Yorker and agreeing to meet up at a local restaurant for an interview about whatever it is we Southern rubes do that intrigues her and her editors. The restaurant is your pick. Hmm … no, that casual French bistro is too far away, the sushi concept from a famed chef uptown is too pricey, and there’s no time to wait in line at the trendy Austin-wannabe barbecue trailer across the street. Nix all that: we’re going to KFC, I declare. That’s Kentucky Fried Chicken, I say.

You would soon find yourself with a phone-only interview and your credibility tossed out like so many Colonel Sanders heads on cardboard buckets. That’s because the writers at The New Yorker eat kale salads, not chicken from buckets.

So all of the sudden Miami-based Popeyes is not only acceptable sustenance among the elite but a culinary achievement? Before we get our feathers ruffled, let’s look at the situation.

Reading through the New Yorker article a bit, tucked near the bottom is Exhibit A behind the sycophantic dribbling:

Popeyes [now has] its first serious challenge to the chicken-on-a-bun hegemony of Chick-fil-A. For some diners, put off by Chick-fil-A’s right-leaning corporate politics and widely known funding of anti-gay activism, Popeyes appeals as a chicken sandwich with less overt moral compromise. (The Advocate, the L.G.B.T.-interest magazine, ran a story about the sandwich under the headline “More Flavor, Less Homophobia.”) The brands, as is their wont these days, took the battle to Twitter: Chick-fil-A protested, oddly, that its version equals “love”; in response, Popeyes asked Chick-fil-A, “…y’all good?” … and some other scratch.

The mystery meat here is that there have been other attempts at rivaling Chick-fil-A’s market dominance as the top fast food chain and the third-largest chain in the U.S. You have Baton Rouge-based Raising Cane’s, the open-Sundays alternative with a cult-following over its dipping sauce that often will open near a Chick-fil-A for strategic reasons. Their chicken tenders (and sauce) are already in a league of their own and have provide some serious competition to Chick-fil-A. The paint is still drying on many new PDQs and Zaxby’s dotting the urban sprawl along major highways. Ask your average suburbanite what fast food alternative they don’t need more of and they’ll probably answer fried chicken! Some towns now have entire chicken strip districts. Then you have the old standbys of Shake Shack, Bojangles, Church’s, Golden Chick (and its variants) and legion of local favorites and regional chains. Williams Fried Chicken in Dallas-Fort Worth is a localized favorite of mine.

Singling out Popeyes as a liberal door-buster phenomenon is perhaps a subconscious choice — not orchestrated by Popeye’s social media geniuses, nor astroturfed by HRC/GLAAD/PFLAG/etc. In the same way that virtually unknown junior Senator Barack Obama edged out Hillary Clinton for the Democratic presidential nod, liberals are wanting “hope and change” — hoping that a nationally known brand can pluck some feathers off Chick-fil-A. Obama once became the anti-Bush (not to be confused with Bush’s — a Texas-based chicken chain) and an alternative to the Clinton regime; Now Popeyes seems to be — at least temporarily — the anti-Chick-fil-A at the top of the progressivist pecking order.

How long we have to tolerate the emotion-fueled cackling on social media by liberal journalistas hyping the Popeyes Chicken Sandwich is anyone’s guess.

Meanwhile, I think I’ll go back to my leftover Whatachick’n — even though, like Obama, its company’s headquarters now hails from Chicago. (On second thought, maybe I’ll go try that Popeyes sandwich.)