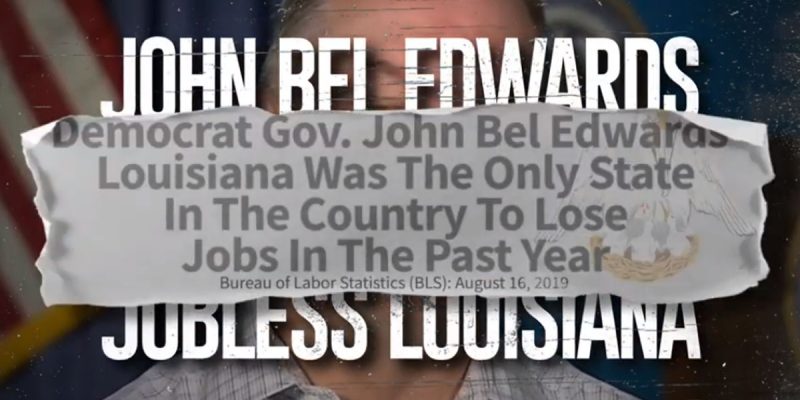 One of the things which has been the source of some irritation has been what we’d regard as an insufficient amount of light-shining on John Bel Edwards’ record among those candidates and institutional players on the Republican side of the Louisiana governor’s race thus far. But that isn’t a criticism we would include the Republican Governors’ Association in.

The RGA has had what we regard as the best ad of the governor’s race to date. It’s an ad most of our readers have seen, as it’s gotten an enormous amount of air play. That ad savages Edwards for having lied about whether he’d raise taxes if he got elected, and ties his tax increases to Louisiana’s pathetic economic performance under Edwards’ time as governor.

The RGA is back with another ad bashing Edwards’ record, containing nothing but newspaper headlines from the past year and change talking about how awful the state’s job-creation performance has been on his watch.

They’re saying this is a digital ad, and it probably is. You have to actually be watching it in order to get its full impact since there’s no voice-over – so if you’re watching on TV and you get up to grab something from the kitchen this ad would be useless.

As a digital ad, though, sure. It’s pretty powerful just from the weight of the dismal headlines.

The press release going with the ad…

Despite attempts by Edwards’ official office and campaign to spin and twist the numbers, the facts are clear: Louisiana’s economy has not improved under his leadership. Rather than promoting pro-growth policies, Edwards enacted the largest tax increase in state history – while taxes have gone up, residents and jobs have left the state. Since Edwards took office in January 2016, Louisiana has lost 5,900 jobs – more than any other state in the country in that time period. To make matters worse, according to new data from the federal Bureau of Labor Statistics (BLS), over the last year (July 2018 – July 2019), Louisiana was the only state in the nation to lose jobs.

Quite simply, Louisiana is the worst state for jobs and, as survey after survey shows, John Bel Edwards is responsible for one of the worst economies in America.

“No governor has failed his constituents more than John Bel Edwards when it comes to responsible stewardship of his state’s economy,” said RGA Communications Director Amelia Chassé Alcivar. “Louisiana’s inability to take advantage of this booming economy is a clear repudiation of John Bel Edwards’ liberal tax-and-spend agenda.”

Our guess is this is a message that will get an enormous amount of play when the runoff in this election cycle gets going and Republicans are behind one candidate rather than two. It’s a pretty easy message to get behind and it’s virtually impossible to argue against it – Edwards demanded and received a massive tax increase and inflated the state’s budget by $10 billion, with nothing substantial to show for it other than a Medicaid expansion rife with fraud and corruption, and that tax increase has gutted Louisiana’s economic competitiveness to the point that Louisiana is the worst-performing state in the country with respect to job creation during Edwards’ time in office.

That’s his record, plain and simple. Thanks to the RGA for continuing to point it out while the candidates are attempting to define themselves. Hopefully everyone will sing from the same hymnal at some point before it’s not too late.

Interested in more national news? We've got you covered! See More National News
Previous Article The Pro-Choice Democrat In The LAGOV Race Has Been Bounced Off The Ballot
Next Article John Schroder, Phillip Devillier Highlight The Hayride’s 2019 @Large Tour Stop In Lake Charles!