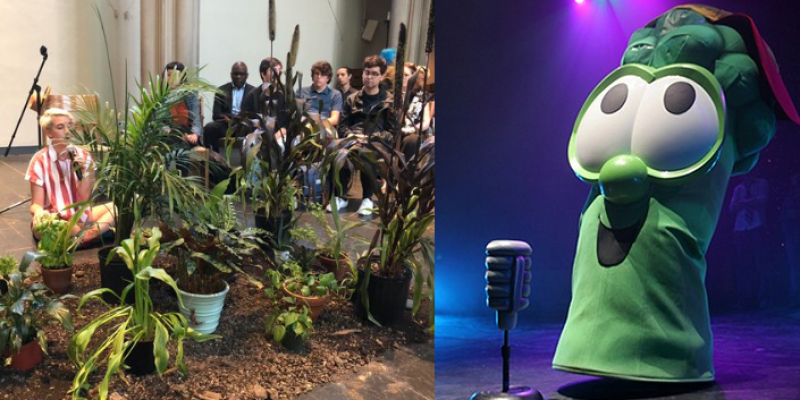 A generation of seminarians raised around VeggieTales may now finally engage in a worship service with chlorophyll-based life forms as equals.

Leave it to a New York seminary: A tweet from social justice movement-focused Union Theological Seminary in NYC featured students apologizing to a collection of indoor potted plants for a litany of alleged environmental sins.

“Today in chapel, we confessed to plants. Together, we held our grief, joy, regret, hope, guilt and sorrow in prayer; offering them to the beings who sustain us but whose gift we too often fail to honor,” the seminary tweeted. “What do you confess to the plants in your life?” 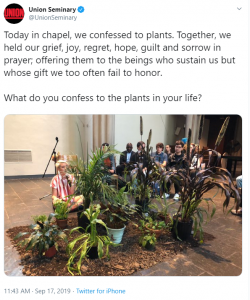 While the New Testament admonishes the faithful to “Confess your faults before men that you may be healed,” this takes it to a whole new level, where plants are now peers.

The seminary — which is still on the approved list of the third-largest denomination in the U.S. — explained that the group confessional was hosted as a part of a class titled “Extractivism: A Ritual/Liturgical Response,” in which students were led to confess “the harm we’ve done to plants, speaking directly in repentance.” Citing a “climate emergency,” the seminary called for a new liturgy. It does not represent a “radical break” from other liturgies designed to express sorrow, the seminary defended.

“What’s different (and the source of so much derision) is that we’re treating plants as fully created beings, divine Creation in its own right—not just something to be consumed,” a response tweet read. “Because plants aren’t capable of verbal response, does that mean we shouldn’t engage with them? … At first, this work will seem weird. It won’t feel normal. It won’t look like how we’re used to worship looking and sounding. And that’s exactly the point. We don’t just need new wine, we need new wineskins.”

Union (not to be confused with a large Presbyterian seminary of the same name), and though officially independent, claims to be the oldest, independent seminary in the U.S., having been founded in 1836 by Presbyterians but by the end of the 19th Century becoming an interdenominational haven for “Modernists” such as Harry Fosdick and James Moffatt. It is now the official seminary of Columbia University and an affiliate of the Jewish Theological Seminary of America, hobbling along with around 200 students per semester and 30 faculty in recent years.

Who knows? Maybe we’re dead wrong about plants and their role in worship — even though the only time we know of that Jesus spoke to a plant it didn’t go so well. But in the interest of fairness, here’s a recent environmentally focused chapel service from Union Seminary you can listen to. Now with every head bowed and every eye closed, repent of your skins (of potatoes) and …

Confession: This writer is sorry to have equated VeggieTales, which has taught his children some solid and positive Bible-based values over the years, with this type of mystical playtime teaching nothing but guilt and shame.