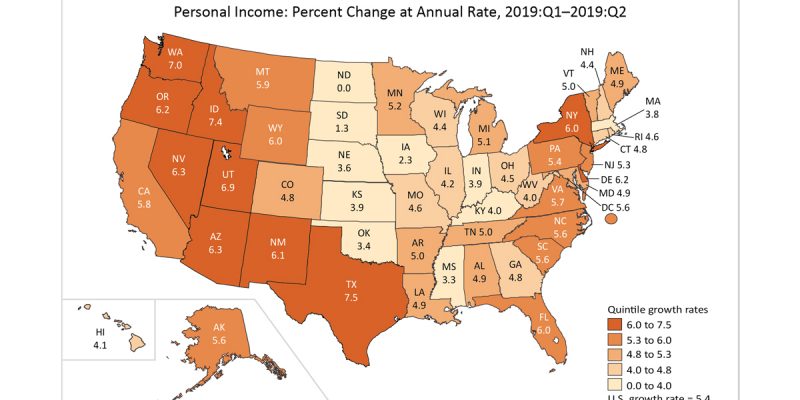 Oh, but wait – nationally, personal income is up 5.4 percent.

Louisiana’s quarterly personal income grew 4.9% in the second quarter of the year, rising to $224.43 billion, the highest on record, according to data from the federal Bureau of Economic Analysis.

The state’s personal income, or the total amount that Louisiana workers took home before taxes, has grown $9.42 billion since this time last year. Personal income in Louisiana has grown for 13 consecutive quarters, every quarter since the start of 2016.

Across the U.S., state personal income increased 5.4% compared to the year prior, in the second quarter of 2019, a deceleration from the 6.2% increase in the first quarter. Professional, scientific, and technical services; finance and insurance; and state and local government were the leading contributors to overall growth in earnings.

Texas, Washington, Utah, Nevada, Arizona and Oregon had the fastest growth in personal income, while North Dakota, South Dakota, Iowa and Mississippi had the least amount of growth.

So where does Louisiana rank in personal income growth in the second quarter?

Twenty-six states (including the District of Columbia) were at 5.0 percent or better. That puts Louisiana at 27th out of 51.

This is as good as it gets, folks. John Bel Edwards is breaking his arm patting himself on the back about an economic performance metric which…still doesn’t even rise to the top half of the country.

Hey, how did Texas do in personal income growth?

Oh, OK. How about Florida?

So Louisiana isn’t even remotely competitive with the two Southern states busily stealing away jobs, capital and talent from the Sportsman’s Paradise.

South Carolina and North Carolina are at 5.6 percent, and Virginia is at 5.7 percent. So we aren’t really competitive with them, either.

Tying Alabama is about as good as the Edwards administration can do, apparently.

But by all means, let’s celebrate this sensational economic news which is almost completely attributable to the Trump economy and which cements the fact Louisiana is trailing our neighbors and the national average, and let’s give all the credit to the only governor in America who can’t grow jobs in the Trump economy.