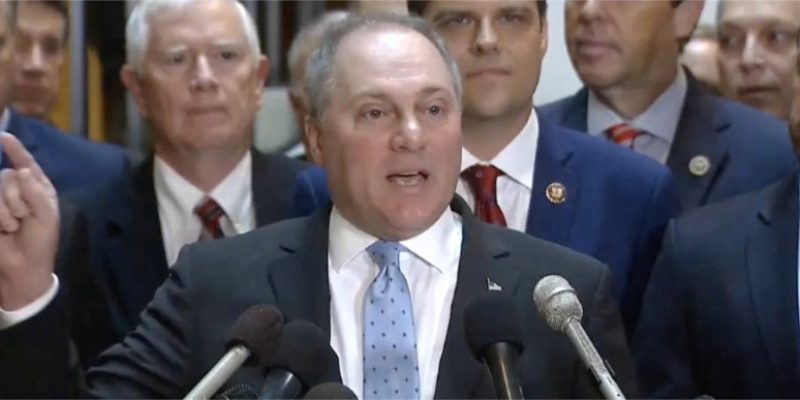 Some Republicans in Congress are getting the message from constituents across the nation who are fed up with the legislative gridlock being perpetuated by Democrats obsessed with the prospect of impeachment.

More than two dozen Republican members of the US House gathered outside closed impeachment proceedings being presided over by the notorious Adam Schiff (D-MA), causing him to suspend the meeting.

As many of our readers know, Schiff was the Democrat US House member who was nearly censured by his colleagues for fabricating a transcript of President Trump’s phone call with the Ukrainian President.

Democrats, never ceasing to disappoint, defeated the common-sense resolution to censure a sitting member of Congress for lying about a sitting President. The bill failed on a partisan vote of 218-185.

Wednesday morning a group of GOP lawmakers led by US Rep. Matt Gaetz (R-FL) and House Republican Whip Steve Scalise (R-LA) held a press conference outside the meeting, calling out Democrats for a total lack of transparency.

Scalise, who is on the short list for Speaker should Republicans win back the House, did not pull any punches as he exposed the Democrats’ sham saying,

“What is Adam Schiff trying to hide? Through those hidden, closed doors over there- Adam Schiff is trying to impeach a President of the United States. Behind closed doors, literally trying to overturn the results of the 2016 election- a year before Americans get to go to the polls to decide who is going to be the President.”

He continued, invoking the cold-war era:

“Maybe in the Soviet Union this kind of thing is common place. This shouldn’t happen in the United States of America where they’re trying to impeach a President in secret behind closed doors. The American people deserve better and we will demand better.”

As Democrats continue full-speed toward the political-cliff called impeachment, our readers can rest assured that 2020 will be a reckoning, or in President Obama’s words a “shellacking”, as long as Christians and conservatives get out and vote.