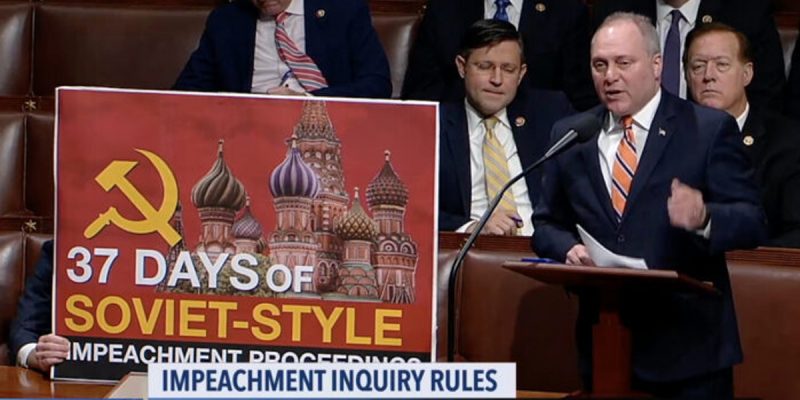 There was a vote in the U.S. House of Representatives today – by a 232-196 margin, with no Republicans crossing the aisle – to move forward with impeachment proceedings. It’s a complete farce, and it exposes the Democrats in charge of the House as the worst kind of thugs; they’re building on a thoroughly illegitimate closed-door proceeding hidden from the American people, with “whistleblowers” who turn out to be Democrat operatives embedded in military and intelligence jobs doing everything they can to sabotage the Trump administration.

This entire proceeding is built off the idea that President Trump committed an impeachable high crime by advocating to the new president of Ukraine that his country investigate what former Vice President Joe Biden has already bragged, on video, that he did – namely to demand the firing of a prosecutor in that country looking into corrupt business deals involving Biden and his son. Biden threatened to withhold American aid from Ukraine unless that prosecutor was relieved of his duties, and he was, which Biden bragged about on video.

And despite the fact Ukraine’s president says he wasn’t pressured to investigate the Biden issue and didn’t believe it was presented as a quid pro quo for U.S. aid, and despite there being a transcript of the call which doesn’t show pressure or a quid pro quo, and despite the supposed witnesses Adam Schiff and his kangaroo court have claiming a quid pro quo all turning out to be Democrat assets with axes to grind, this unholy mess has gone forward out of pure partisan politics.

Impeachment is a train wreck in the making, as anyone with eyes can see, and yet the Democrat Party is busy chugging down the tracks.

But there is a silver lining, which is that for the House Republicans impeachment will be an opportunity to shine in opposition. That has already begun. Here was Minority Whip Steve Scalise, lambasting Pelosi and the Democrats for the procedural deficiencies of today’s resolution and the “Soviet-style” show trial it’s shaping up to be…