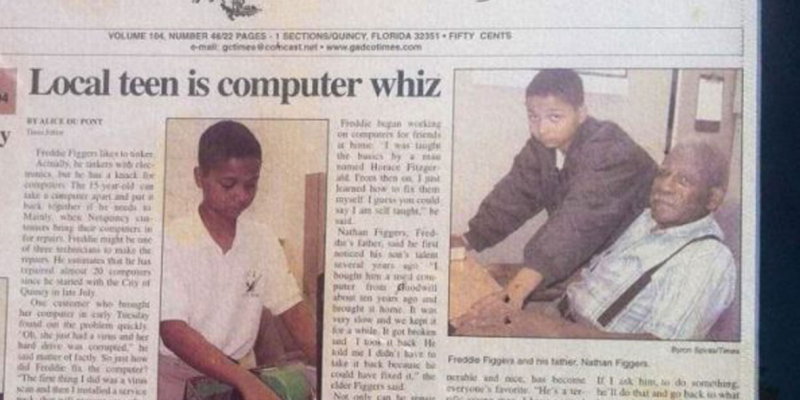 Freddie Figgers, owner of a $62 million cell phone company, Figgers Wireless, is spreading his remarkable story of success from being left for dead in a dumpster as a baby, to becoming the only black entrepreneur to own a telecommunications network in the U.S.

Figgers is the youngest individual to hold an FCC license, and also owns Figgers Health and FiggCash.

Figgers was found, rescued, and adopted within 13 days. His parents, he says, taught him to believe in himself and helped make him who he is today.

“It’s amazing that you can meet people like that, and till this day, I have never met my biological parents,” he says. “I have never had the interest.”

At age nine he was given a broken computer, which he rebuilt and still uses today. At age 12, he invented a two-way communicator and GPS tracking system built-in shoes for his father who suffered from Alzheimers. He also opened a computer repair shop in his backyard, repairing 50-60 computers a week on average.

By age 15, he created his own cloud computing services.

Freddie’s love for technology helped him come up with the idea of his telecommunication company, which has resulted in him becoming a multi-millionaire.