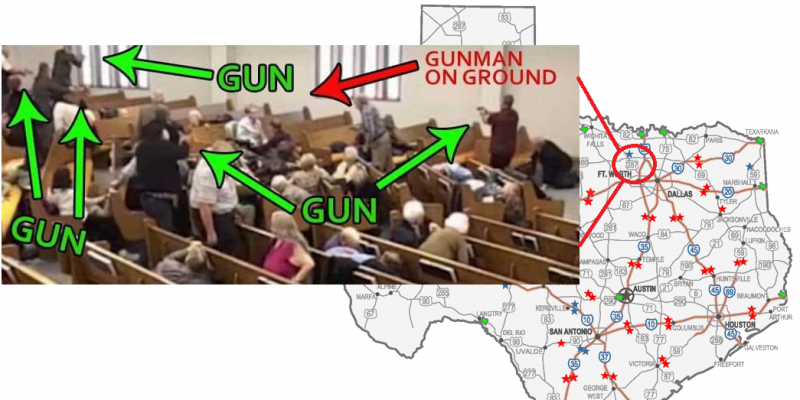 A gunman was stopped dead in his tracks by another armed person during church services Sunday in White Settlement, Texas, just outside Fort Worth.

A livestream of the service revealed something different about this particular church: after the gunman became noticeably aggressive, the armed guard within seconds opened fire — soon backed up by up to four other armed people gathered for worship.

Exact details are still forthcoming in the latest shooting in a Texas church, during which two or three people were killed, including the gunman.

One of the victims was 64-year-old Anton “Tony” Wallace, a deacon of the church who was serving Communion at the time of being shot. (Wallace’s daughter’s forgiveness of the killer is worth a read.)

The gunman apparently managed to fire off only a few rounds before Jack Wilson, the leader of the church’s grassroots security force, squeezed off a perfectly placed shot to the head. Wilson is a candidate for Hood County commissioner and a licensed shooting instructor.

Here are a few things to consider about why this situation may have turned so overwhelmingly against the survival of the attacker.

1) West Freeway church of Christ is conservative. The church, which in recent years moved to a new facility in the small town quickly becoming a Fort Worth suburb, is a rather conservative congregation, both politically and theologically. Their choice of using a lower-case “c” in the word “church” in their name indicates they are the kind of church that views the congregation as not a static institution but a simple gathering of Christians — holding close to the New Testament ideal. It stands to reason such foundational thinkers would also be closely aligned with the Constitution as a rule of living. In this case, the congregation apparently not only believed in but practiced the Second Amendment.

2) A rise in security training among churches, particularly after the Sutherland Springs, Texas, mass shooting. There were several legal barriers in the way of implementing local church and denominational solutions to the threat of mass shootings. In particular, Sutherland Springs’ state denominational affiliation, the Southern Baptists of Texas Convention, immediately began strengthening and actively promoting trainings for volunteers to protect their congregations. But they soon found that state law made volunteer armed security forces difficult to implement. A 2017 law passed by the 85th Texas Legislature specifically allowed for volunteer armed security, removing one of the major hurdles to safer churches.

3) The Texas Legislature cleared the way for additional firearm freedoms in congregations with this year’s SB 535, which went into effect on Sept. 1. The bill’s author, Sen. Donna Campbell, said the goal was the further clarify the law which she said was prohibitively murky for individual licensed carriers. “Senate Bill 535 does not restrict the rights of churches to post 30.06 or 30.07 signs or prohibit weapons on their premises if they choose, which has been established law for most privately owned property in Texas,” a statement from Campbell’s office read. “In addition, Senate Bill 535 reduces penalties for licensed citizens who unknowingly carry in prohibited areas, aligning these penalties with other sections of state law. It also increases the penalty for armed individuals who are told to leave certain premises where weapons are prohibited and fail to depart.”

It has not yet been announced if the shooter in Sunday’s shooting was legally permitted to carry.

The senior minister of West Freeway church of Christ Britt Farmer praised the heroism of the two men shot while responding to the shooting.

“I hope and I pray that not only will we survive this — and we will — but that there is some way we might be a beacon to those who do not know what to do. Today we proved that not only can be be a God-loving, God-fearing people, but we can protect each other as well.”

Despite the near-universal heralding of Sunday’s heroics, U.S. Rep. Beto O’Rourke said he is “saddened” by the trend of increased church shootings in the Lone Star State.

The White Settlement incident comes on the heels of a stabbing attack on an Orthodox Jewish community north of New York City — and this on top of recent attacks on Jewish-owned businesses.