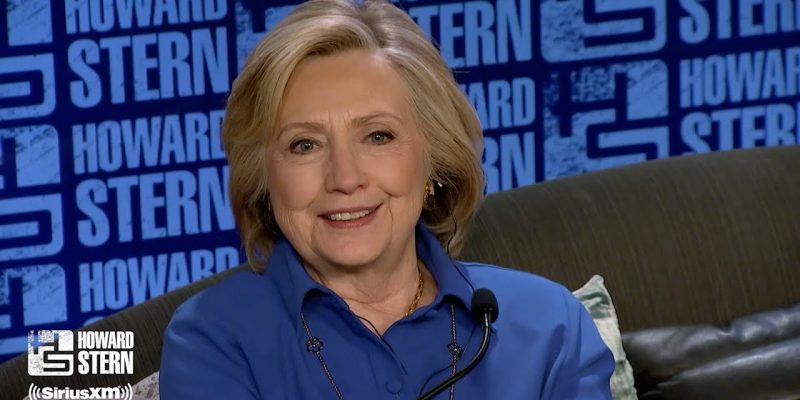 Since her 2016 defeat by Donald Trump, supporters and critics alike have speculated as to whether two-time failed presidential candidate Hillary Clinton would try once more in 2020.

With a large field of Democrat candidates and a weak frontrunner in Joe Biden, the stage may be set for her final attempt.

In a recent interview, Clinton says she has not closed the door on the idea, telling UK-based talk show host Graham Norton that she’s been “deluged” with requests for her to run again.

President Trump welcomed the thought via Twitter, referring to Clinton as “The Crooked one” and teasing the former First Lady saying,

“I think that Crooked Hillary Clinton should enter the race to try and steal it away from Uber Left Elizabeth Warren. Only one condition. The Crooked one must explain all of her high crimes and misdemeanors including how & why she deleted 33,000 Emails AFTER getting “C” Subpoena!”

Clinton responded in-kind saying, “Don’t tempt me. Do your job.”

Despite not being an announced candidate, Real Clear Politics’ betting odds place Clinton’s chances at sixth which is ahead of seven active candidates.

Perhaps the biggest indication that Clinton is seriously considering another run is the fact that she appeared on a huge show, one that she passed up in 2016, The Howard Stern Show.

Stern has said publicly that he wished Clinton had come on his show so that he could “humanize” her. Better late than never, the appearance did appear accomplish that goal. Asked about her childhood, family, marriage; viewers saw a more vulnerable Hillary than ever before.

Lastly, many candidates publish books before launching their presidential campaigns and Hillary is out with a brand new book co-authored by her daughter, “The Book of Gutsy Women”.

The book’s release and subsequent book tour has created a perfect opportunity for Clinton to re-enter the public eye and test the waters before making a final decision.

Trump supporters appear more than ready for Hillary as they wholeheartedly expect a repeat of the 2016 election with Clinton as the nominee, or any of the Democrats for that matter.

Between the book tour, Howard Stern appearance, and late night talk show runs- it may be more likely than not that Hillary Clinton pursues her White House dream one last time.