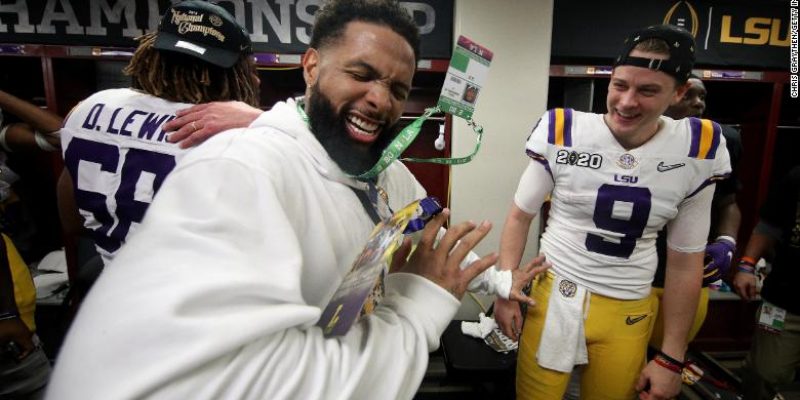 Two days after a national championship, LSU players and fans are still basking in the glory of arguably the greatest season in the history of college football, with a thorough whipping of defending champion Clemson.

The parade in Baton Rouge and trip to the White House have been planned.

It should all be good right now. There should be no negative news except maybe the defection of so many Tiger juniors to the NFL draft. But at least that can be expected.

But there is a problem. And it is one that is wholly unnecessary.

The problem is one of LSU’s own–Odell Beckham Jr, former LSU wide receiver from 2011 to 2013. His parents were both star athletes for LSU in their own right. Odell Sr was a running back in the early 1990s and his mother Heather Van Norman was a track All-American. Odell Jr came in and made immediate waves as a freshman during LSU’s rise to No. 1 back in 2011. He started at wide receiver from day one against Oregon, a wiry, small kid who wore the number 33.

By all accounts, from 2011 to 2013 he simply went about his business on the field and didn’t cause any unnecessary waves.

But he has been different since playing in the NFL. His sideline and off-the-field antics as a New York Giant and Cleveland Brown are constantly clouding his remarkable play on the field. He alienates teammates and fans alike.

The 27-year-old from Baton Rouge traipsed onto the field after the game Monday night and created quite the awkward situation for his alma mater. Apparently he was handing out money–real money it turns out–to some of the LSU players.

“Umm, yeah. I’m not a student-athlete anymore, so I can say yeah,” Burrow said when asked if Beckham gave him cash, per Brian Fonseca of NJ.com.

This came on the heels of Burrow wearing a “Big Dick Joe” baseball cap on the field after the win Monday night.

Eh, not terrible, no. But maybe there could have been some better judgment on that one.

I have raved about Burrow’s play and character all year. I have written several articles praising him. But I believe he could have handled that question better, with the same poise and bigger-picture thinking that he has displayed all season. This situation could create a problem for LSU and future players. Probably not, but it could.

And of course he could have chosen a different hat. One that maybe drew a little less attention to himself. Maybe.

JOE REAL: Humanity of Joe Burrow Comes Forth in Heisman Speech for the Ages

But back to Beckham and the bigger deal. Many people are criticizing him, including some former LSU players, according to a Tiger discussion forum. This kind of thing, given the well-known stance the NCAA takes on issues involving money and amateur athletes, is the type of tarnishing of a special night that simply didn’t need to happen.

It is the mentality that fame and fortune can create in a young person not ready to handle it. It is a mentality I truly hope Joe Burrow doesn’t develop as he moves on to the NFL. He has proven to be a man of humility and character all season, someone who can be a true role model for young people everywhere.

As can Odell, if he can somehow figure it out.

On Wednesday, the school released a statement:

“We are aware of the situation regarding Odell Beckham Jr. interacting with LSU student-athletes and others unaffiliated with the team following the championship game Monday night. Initial information suggested bills that were exchanged were novelty bills. Information and footage reviewed since shows apparent cash may have also been given to LSU student-athletes. We were in contact with the NCAA and the SEC immediately upon learning of this situation in which some of our student-athletes may have been placed in a compromising position. We are working with our student-athletes, the NCAA and the SEC in order to rectify the situation.”

At first, reports stated that Beckham Jr was handing out fake cash, and a school official told the Advocate that there were novelty bills found on the ground after the game.

It was a claim Burrow obviously refuted.

But here’s the thing: it doesn’t matter if it was fake or not. The purpose of Odell’s behavior was to draw attention to Odell. And on this historic night, it shouldn’t have been.

And now the university is in the middle of having what should be a celebratory, carefree mindset polluted by a former player who has been proving for years now that it is all about him.

It is the kind of selfish mindset you just hope this new crop of Tigers moving on to the NFL can avoid. You just hope their heads don’t get so big that they can’t even wear a baseball cap anymore.

Then again, for some, that might be a good thing, haha.