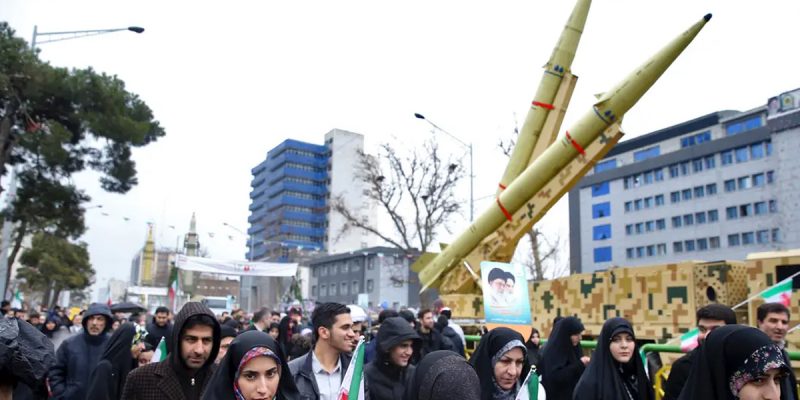 …which is what happened today, according to Iran and, also, apparently, the Defense Department.

Multiple missiles have been launched at Iraq from Iran targeting American military facilities, according to a U.S. official.

“This morning, courageous fighters of the IRGC’s Air Force launched a successful operation called Operation Martyr Soleimani, with the code ‘Oh Zahra’ by firing tens of ground-to-ground missiles at the base of the terrorist and invasive U.S. forces,” the country’s state-run news outlet ISNA reported.

A U.S. official confirms to ABC News that ballistic missiles have been fired from inside Iran at multiple U.S. military facilities inside Iraq on Wednesday morning, local time. The facilities include Erbil in northern Iraq and Al Asad Air Base in western Iraq, the official said.

“We are aware of the reports of attacks on US facilities in Iraq,” according to a statement from White House press secretary Stephanie Grisham. “The President has been briefed and is monitoring the situation closely and consulting with his national security team.”

The last time the Iranians attempted a direct attack like this on American forces, or at least the last time it happened when they did it with an American president in office who had the kind of attitude toward foreign aggression that Trump does, it was 1988 and Ronald Reagan was president.

Let’s revisit what happened then, shall we? We’ll just consult Wikipedia to find out more about Operation Praying Mantis…

Operation Praying Mantis was an attack on 18 April 1988, by U.S. forces within Iranian territorial waters in retaliation for the Iranian mining of the Persian Gulf during the Iran–Iraq War and the subsequent damage to an American warship.

On 14 April, the guided missile frigate USS Samuel B. Roberts struck a mine while deployed in the Persian Gulf as part of Operation Earnest Will, the 1987–88 convoy missions in which U.S. warships escorted reflagged Kuwaiti oil tankers to protect them from Iranian attacks. The explosion blew a 4.5 m (15-foot) hole in the Samuel B. Roberts‘s hull and nearly sank it. The crew saved their ship with no loss of life, and the Samuel B. Roberts was towed to Dubai, United Arab Emirates on 16 April. After the mining, U.S. Navy divers recovered other mines in the area. When the serial numbers were found to match those of mines seized along with the Iran Ajr the previous September, U.S. military officials planned a retaliatory operation against Iranian targets in the Persian Gulf.

According to Bradley Peniston, the attack by the U.S. helped pressure Iran to agree to a ceasefire with Iraq later that summer, ending the eight-year conflict between the Persian Gulf neighbors.[3]

On 6 November 2003, the International Court of Justice ruled that “the actions of the United States of America against Iranian oil platforms on 19 October 1987 (Operation Nimble Archer) and 18 April 1988 (Operation Praying Mantis) cannot be justified as measures necessary to protect the essential security interests of the United States of America.” However, the International Court of Justice dismissed Iran’s claim that the attack by United States Navy was a breach of the 1955 Treaty of Amity between the two countries as it only pertained to vessels, not platforms.[4]

This battle was the largest of the five major U.S. surface engagements since the Second World War, which also include the Battle of Chumonchin Chan during the Korean War, the Gulf of Tonkin incident and the Battle of Dong Hoi during the Vietnam War, and the Action in the Gulf of Sidra in 1986. It also marked the U.S. Navy‘s first exchange of anti-ship missiles with opposing ships and the only occasion since World War II on which the US Navy sank a major surface combatant.

By the end of the operation, U.S. air and surface units had sunk, or severely damaged, half of Iran’s operational fleet.

What’s a good bet here? If we had to guess, we’d say it would be a really terrible idea to be anywhere near any facility the Iranian Air Force operates – because what President Trump is going to do will be to order the destruction of as many of their installations as can be hit in the next, say, 48 hours. It wouldn’t be a surprise if he went after the head of the Iranian Air Force, either.

What you’re going to hear from the chattering classes and Trump’s enemies now is that the attack on Qassem Soleimani was a mistake and this is proof. Particularly if any Americans were killed in today’s missile strikes. That will be as stupid as it is predictable; for some reason, nobody seems to recognize Iran has considered itself at war with us for the last 40 years, and American restraint, or, in the case of the Obama administration, appeasement, has not produced better relations or behavior from them.

Who, among you reading this, are aware that Iran is now involved in EIGHTEEN different military conflicts around the world? That’s what giving them $150 billion in payoff money to get a worthless nuclear deal produced.

This is a rogue, barbarian regime that will never stop trying to provoke a war with not just America, but the rest of the West and, for that matter, everybody who isn’t a Shiite Muslim. The key to getting better behavior from them is making them understand it’s a bad idea to do so.

Or, making them so unpopular with their own people, and in the bargain creating the perception with the people of Iran that their regime is weak, that the Iranian people force a change.

This is more possible than the “experts” care to admit. After all, before Soleimani’s demise he ordered the murder of no less than 1,500 young Iranians who took to the streets to protest the incompetence and tyranny of the regime.

There’s a video you should see. Just below is Saghar Erica Kasraie, who’s an Iranian-American civil rights activist and a watcher of the regime, and she’ll set you straight on what the people of that country actually thought about Soleimani’s death. We’ll leave you with it…