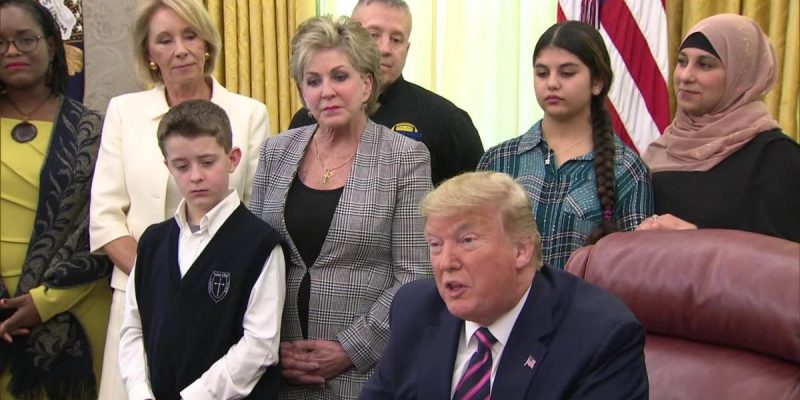 Evangelical leaders have cause for celebration after President Trump last week updated federal guidelines intended to protect students’ religious liberty and right to pray in school.

Among the changes made by the President is the creation of a new, state-based complaint system intended to alert the White House of any school districts that have “a policy that prevents or otherwise denies participation in constitutionally protected prayer”.

This is the first update to the Prayer Guidance since 2003.

“We will not let anyone push God from the public square.”

“This afternoon we’re proudly announcing historic steps to protect the First Amendment right to pray in public schools… there’s nothing more important than that, I would say.”

“Too many misinterpret a separation of church and state as an invitation for government to separate people from their faith. In reality our Constitution doesn’t exist to protect us from religion, it exists to protect religion from government.”

The updated guidelines, based on legal precedent, make clear that students may pray alone or in a group and may attempt to persuade their peers’ religious beliefs.

"It's unfair to simply say everything is bad. When Fidel Castro came into office, you know what he did? He had a massive literacy program. Is that a bad thing?" - Bernie Sanders, over the weekend, indicating that nothing about him has changed since the 1980's.
More Quotes