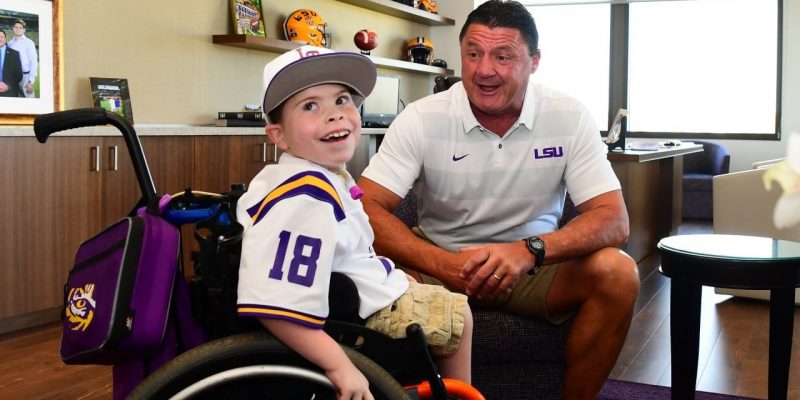 The Superdome has and will be a prime spot for epic football clashes, both of the collegiate and professional variety. In a matter of weeks it will have hosted the Sugar Bowl, an NFL playoff game, and the national title game. Three teams will attain a super victory at the end of sixty long, grueling minutes on that green turf.

But that is only part of the Superdome’s story here. Besides the victories that are playing out on the field, there are others that prove people in general have an enormous capacity to be winners as well.

In a word, people can be really super.

Nine-year-old Colton Moore is a die-hard LSU fan from Alabama. A “sweet, sweet lady” named Kristie Riche Allen is making it possible for the spina bifida patient to attend the title game between LSU and Clemson Monday night.

“He is stoked! When we told him he was pretty much in shock and just kept saying “no way”!!! But you can’t wipe this big grin off his face! Now the countdown to NOLA begins!!!”

In a similarly inspiring human interest story, the late Carley McCord, who was killed in a plane crash the morning of the semifinal game between LSU and Oklahoma, was honored last week at the Superdome, with an open spot and flowers where the 30-year-old reporter would have sat for the Sugar Bowl between Georgia and Baylor.

Four days later, McCord was again honored at the Superdome, this time by the Saints for their first round playoff game against the Vikings.

McCord is the daughter-in-law of Tiger offensive coordinator Steve Ensminger. 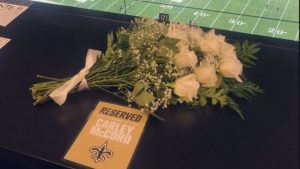 Football can be cut-throat and viciously competitive. Everyone knows that. Besides the actual game being played on the field, just stopping by a fan forum or social media site and checking out the “competitive” banter between opposing team fans can show the passion and utter absurdity of the impact football can have on people’s lives.

But here, social media has provided us with two stories that make that foolishness seem all the sillier. It provides us with a glimpse of what it means to be a damn good human being. These are the types of stories people need to allow to inspire them to live out their daily lives, because if everyone used this side of sports to lift up the people around them, this society would be a much more super place to inhabit.