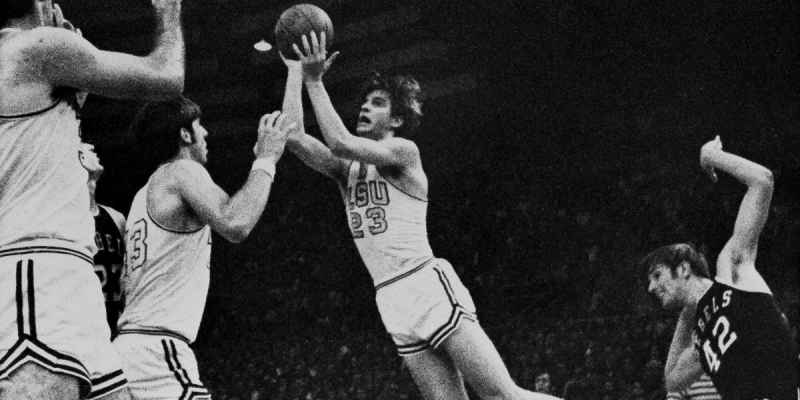 Never before has the game of numbers been more fun than playing it with this past 2019 LSU football season.

15-0 was the best, of course. But there were so many others.

As it turns out, the school’s most prolific football player and most famous basketball player share common ground with a historic NCAA record.

It is a wonder that seemingly no one was calling quarterback Joe Burrow “The Pistol” at any point this past year.

For Burrow, the Tigers’ Heisman-winning quarterback, the numbers continued to grow more and more unfathomable every week, until he absolutely exploded into even rarer air in the playoffs.

Those numbers, as great as they are, are even more enhanced because of recency bias. The entire nation just now experienced this avalanche of production, and it is still in awe at the greatness of it all.

It still remains to be seen how history will be on Burrow and his records.

But there is another LSU Tiger who compares to Burrow in sheer prolificness, probably even surpasses him, in another sport. It is a sport that has lost popularity on campus over the years, giving way to football’s run of national prominence. But still, this roundballer’s numbers are just as staggering–and truly may never be broken.

It is a shame that the passing of time keeps so many people out of the know.

His name, of course–Pistol Pete Maravich.

It turns out today is the 50-year anniversary of Pistol Pete passing Oscar Robertson to become the all-time leading scorer in college basketball history.

Keep in mind that in the late 1960s, freshmen didn’t play varsity basketball. So Maravich’s numbers were compiled over his final three seasons. Here are some of them. They are truly mind-numbing:

He registered a career scoring average of 44.2 points per game.

He never scored fewer than 30 points in consecutive games, and registered under 20 just once (17 as a sophomore at Tennessee).

Most incredible perhaps is this: There was no three-point arc back then. Best estimates are that Maravich would have averaged eight three-point goals per game, pushing him to an over 50-point-per-game average.

Some teams can’t even get to that number as a group.

The key number that relates to Burrow? Maravich’s 1,381 points scored in a single season. With Burrow’s 396 points-responsible-for in 2019, LSU now has the NCAA all-time single season scoring leaders for both football and basketball.

It won’t win the Tigers any more trophies, but it sure is neat to think about. Burrow and Maravich–two legends, two of the greatest of all time, will forever wear the purple and gold.