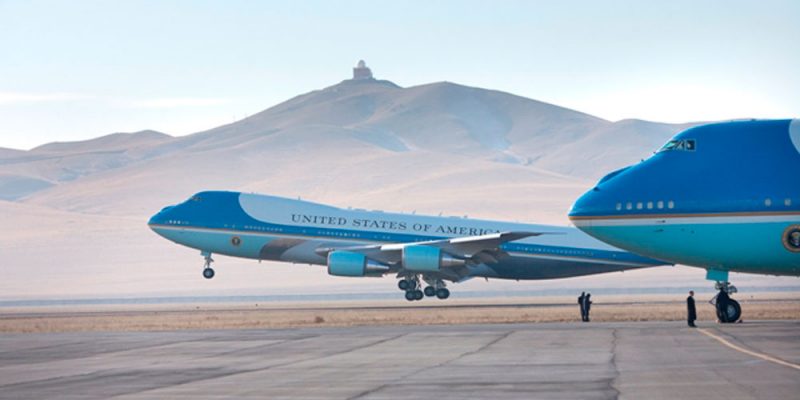 The former Little City of Austin has seen much in the way of presidential activity, but more so as the city inches toward becoming one of the top 10 largest cities in the U.S.

Over the past year, Local Republicans were treated to back-to-back visits from President Donald Trump, and earlier a visit from Vice President Mike Pence. President Barack Obama also made multiple visits to Austin for speeches and campaign events during his presidency, and it goes without saying George W. Bush made many landings in the area.

With the increasing VIP air traffic, there are many questions from even longtime GOP activists and donors on how to greet the president at the airport, how to tour Air Force One, how to catch the motorcade, whether or not it involves TSA-style screening, etc.  As one observer noted it’s not always the same plane that lands. Comparing photos on social media of Trump’s first recent visit, to the Apple plant, and his second, to speak to the national Farm Bureau convention, some locals wonder why there are differences between the planes, such as door locations, striping, etc.

According to a commercial pilot and broadcaster, there are two jets that carry the designation “Air Force One” when on a presidential task.

“Words cannot describe the presence that Air Force One gives,” said Leland Freeman, who was on the runway to greet the president. “The primary choices are one of two modified Boeing 747s called the VC 25A. Air Force One gives an impressive display of strength that is not too imposing and can be described as majestic. This is the closest I’ve even been to a 747 and it is truly a massive airplane.”

We include his account of the visit, and the process to get onto the runway, below.

My experience greeting Air Force One at Austin Bergstrom International airport was a memorable occasion and a reward for volunteering for numerous Travis County Republican Party (TCRP) events, I can’t emphasize enough being granted one of the limited slots allocated to TCRP for grass roots activists. For those that are lucky enough to go through this experience, This is the standardized process everyone will go through.

When my information was submitted to the White House it was first pre-screened by the Secret Service a week in advance and I received an email from the Trump Administration the Friday before confirming I was on the list.

I and long time Republican Party member Bette Pritchett arrived at the meeting point, an old decommissioned Air Force hangar next to the South Terminal before 2PM. Our names were checked off the list and there was one “choke point” in and out of the hanger where the Secret Service set up their security checkpoint. Like the Trump rallies, it was surprisingly less invasive than going on a flight. Most individuals were only wanded by uniformed Secret Service agents.

Since Bette was in a wheel chair, an agent very politely asked me to wheel her to an area for an explosives dog to sniff the metal chair due to it’s interference with the metal detecting wands. All the agents were very nice, polite and courteous, and they had us go on one first buses so we could get a front row view of Air Force One taxiing up.

We loaded up on the bus and were driven out to the ramp next to the South Terminal. The viewing area set up with “bike rack” barricades about 100 foot square where we mingled with the crowd for about an hour which included Texas Third Court of Appeals Chief Justice Jeff Rose and Associate Justice Melissa Goodwin.

With my experience as a commercial pilot I was telling everyone about the Temporary Flight Rules restrictions where all air traffic with the exception of scheduled airlines were prohibited in and out of Bergstrom and it’s airspace from shortly before Air Force One’s arrive until after it departs as well as when the President is on their airport grounds there is a “ground stop” where all airport operations literally have to stop. This includes passenger and baggage loading and unloading, take offs and landings, and even taxiing.

The airliners literally have to stop in place, even if they are just short of the gate, like what happened to one American Airlines flight.

After all the spectators were bused to the viewing area, The motorcade which was flown in on Air Force cargo aircraft earlier in the week drove from its holding hanger to the ramp. Air Force One then landed and taxied over to the ramp.

One of the airstairs was driven up to Air Force Once and President Trump disembarked the plane while waving to us and after shaking the hands of some dignitaries including Lt. Gov. Dan Patrick, Texas Attorney General Ken Paxton, and state Senator Dawn Buckingham, got into the presidential limo nicknamed “The Beast.”

Afterwards we had about 20 minutes to get photos of ourselves with Air Force One in the background.

After we were loaded up on the buses once again were were taken back to the front of the hanger where after leaving the bus we were allowed to go directly back to our cars. The event was very organized and the Secret Service Agents were all were nice and polite to us.

If ever given the opportunity to greet Air Force One at the airport, I highly recommend taking it.