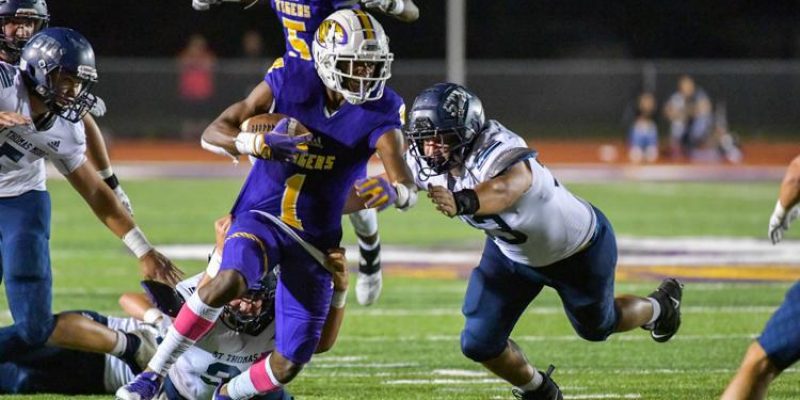 The official National Signing Day has come and gone, and the LSU Tigers have emerged with a stellar class, ranked fourth in the country.

Things could still get interesting, however. Coveted five-star defensive end Jordan Burch, it seems, continues to either waver on his decision or enjoy a game of peek-a-boo with South Carolina and LSU. It is likely that he’s just a young man genuinely conflicted between staying close to family and playing at a national power. He committed to the Gamecocks in December, but did not write on the dotted line on Early National Signing Day.

He seems to have done a similar thing at a function in his high school gymnasium yesterday. And any time a mother gets so involved in her son’s college destination, it is best to just assume he won’t be coming here.

Yes, the powerful end that could make an immediate difference on the defensive side of the ball apparently is still in play. And if he does choose LSU, fantastic.

But it shouldn’t matter much to Tiger fans at this point.

There are still stars galore in this class. This championship-caliber class.

Head coach Ed Orgeron and staff signed in December four-star outside linebacker Phillip Webb out of Georgia, who had remained uncommitted to any school until he handed in his paper work. The 6’3, 224-pound Webb chose LSU over fellow SEC powers Florida and Alabama.

The Tigers signed three five-star recruits this year, including the highest ranked tight end in 247 recruiting services history in Georgia-native Arik Gilbert. The nation’s overall No. 5 recruit should push for a starting position immediately and provide new quarterback Myles Brennan a safe outlet in passing situations. He became the first tight end to win Gatorade National Player of the Year, and will have his sights set on breaking tight end Thaddeus Moss’s LSU records of 42 receptions and 534 receiving yards last year.

LSU signed a five-star cornerback for the second straight year in Elias Ricks, who could join once-in-a-generation talent Derek Stingley as a most formidable duo on the outside. His recruitment actually began ten years ago, when Orgeron was still a defensive line coach at Southern California. He proved to be one of LSU’s most loyal recruits, sticking with the Tigers from Christmas of 2018 to early signing day in December 2019.

Wide receiver Kayshon Boutte earned his fifth star late in the recruiting process, which made the late loss of Rakim Jarrett more palatable. The Under Armor All-American and top recruit in the state of Louisiana could see immediate playing time replacing slot receiver Justin Jefferson, who declared for the NFL draft.

The Tigers missed out on two defensive tackles from out of state, but did land Louisiana’s biggest fish in Jaquelin Roy, a four-star powerhouse out of Baton Rouge. The 6’3, 289-pound and No. 6 defensive tackle in the country should fit right in with new defensive coordinator Bo Pelini’s attacking scheme.

BO’S BACK: LSU Fans Will See the Old Turn New With Pelini’s Defense

Perhaps the biggest story with Roy is that LSU beat out Alabama for his services. In many cases, it seems 2020 reversed the trend of Nick Saban and the Tide coming to cherry pick Louisiana for talent.

Here is a list of the Tigers’ 2020 recruiting class:

Maybe most interesting about the signees is that only five of the 22 hail from the state of Louisiana, proving that Orgeron is no longer waiting around for in-state talent to hold LSU hostage while it chooses another school at the last minute. The philosophy should be as such, as this will both invite more out-of-state superstars to come aboard, and encourage in-state blue-chips to say yes to the flagship university early in the process.

Of course, you’ll have your Rakim Jarretts who play their games too, but overall, this is where Coach O and the program need to be if they are to contend year in and year out.

We know that there will be other superstars from the list besides the ones highlighted first in this article, but these are just a few to look out for. Without question there will be some busts as well, but hopefully, as in most recruiting cycles, there is an under-the-radar talent or two who will explode and keep the Tigers at a championship level.

Coach Orgeron and staff did their job with this recruiting class. They kept the Tigers in the top-5, which is always key. Now it’s time to look forward to an exciting spring and 2020 season ahead.