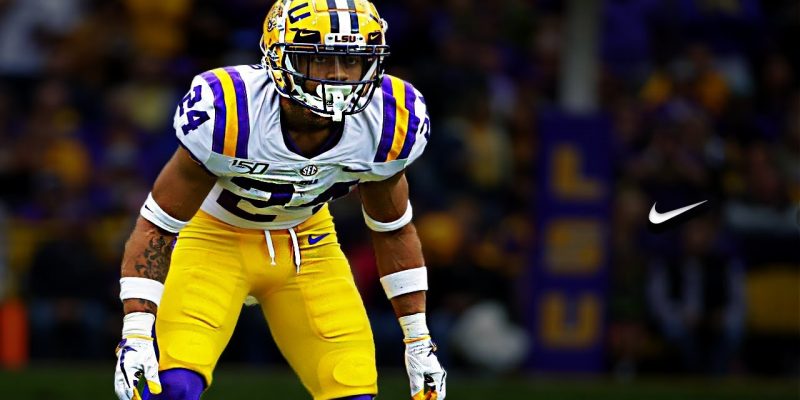 Back at the end of 2018 as LSU was preparing to play Central Florida in the Fiesta Bowl, if you had asked former LSU defensive coordinator Dave Aranda about then-incoming freshman cornerback Derek Stingley, he would have told you that the kid was good enough to play right now–in the bowl game.

In fact, the full truth is that he said that Stingley, an early enrollee, was the best cornerback on the team. And he wasn’t even really on the team yet.

“That would be a great Christmas gift right there,” Aranda said when asked how it would feel to be able to put Stingley on the field.

Fast-forward over a year, through a season in which Stingley was the only freshman named to the All-America team, and the generational talent is getting more praise–this time from a recent adversary.

In an interview at the NFL Combine media sessions, former Oklahoma standout receiver CeeDee Lamb, who went up against Stingley in the College Football Playoff semifinal, called the now-rising sophomore the best cornerback he faced at the collegiate level.

Lamb faced plenty of stiff competition in his three years in Norman, including Alabama, Georgia, and Ohio State.

“I know he’s young, but that guy knows football. His technique is unbelievable,” Lamb said of Stingley, according to Jon Ledyard of the Pewter Report.

In his college career, Lamb caught 173 passes for 3,292 yards and 32 touchdowns and was named first team All-American along with LSU’s Ja’Marr Chase las season.

Lamb is a native of Opelousas. Before the LSU-Oklahoma game, his journey from Opelousas to Oklahoma was a favorite storyline.

“I grew up an LSU fan,” Lamb said. “When you’re from Louisiana, that’s kind of all you know–purple and gold. I’ll never forget, at the end of the day, you’ve got to go back to your roots. I’m ready. Can’t wait. I’ve always wanted to play for LSU, but now that I’m playing against LSU it’s a little different approach.”

LSU head coach Ed Orgeron affirmed that they absolutely should have gotten Lamb three years ago in the recruiting process.

“Well, just talking to the coaches from Opelousas, the one that got away,” Orgeron laughed when asked about Lamb in the days leading up to the semifinal. “He played on the [Texas] Peewee League with [Tiger safety] Grant Delpit.”

You’ll read conflicting reports on whether or not LSU actually offered Lamb a scholarship. Geaux247 affirmed that the Tigers indeed did offer, and that the explosive wideout backed off his commitment to Oklahoma with a renewed interest in the Tigers.

Regardless of what actually transpired, the bottom line is that Lamb ended up Sooner, and his winding road led him, fatefully, to a game against LSU in his final collegiate game. He did catch four passes for 119 yards in that 63-28 blowout loss, but he was never a factor in the game’s outcome.

Most of that is because of the sting of the best cornerback the college game has seen in a long time–one that could probably be a pro right now.