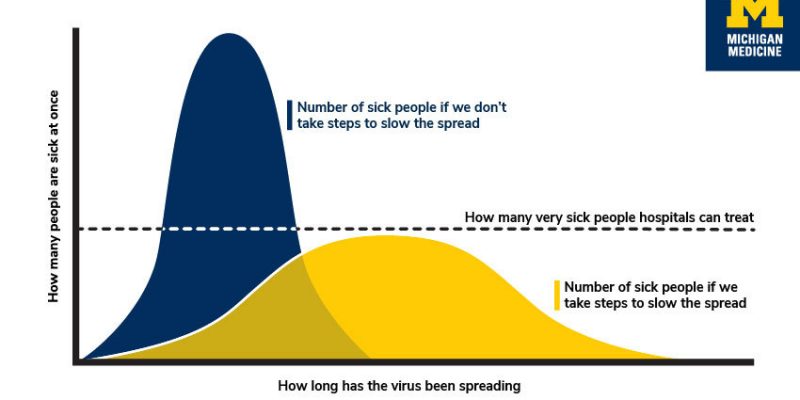 The United States government is sparing no effort in getting ahead of the coronavirus outbreak which has put the brakes on a booming U.S. economy.

All events expecting over 200 people have been cancelled or postponed across the Country as Americans try to “flatten the curve” to avoid the kind of health emergency Italy is seeing with hospitals being overwhelmed by a sudden influx of patients.

Flattening the curve refers to the standard, bell-shaped nature of viral outbreaks which can be “flattened” by stretching-out the same number of patients over a longer period of time. The tactic is believed to be vital to decreasing the strain on hospitals as well as the number of deaths associated with the virus.

The Centers for Disease Control and Prevention (CDC) urged Americans Monday morning to cancel or avoid gatherings of 50 people or more to minimize exposure to the coronavirus.

More than a dozen states have announced lengthy public school cancellations as children, who are being spared from the lethality of Covid-19, can spread it to their parents and grandparents.

Hospitals in some states are being compelled by state governments to delay all elective surgeries and the U.S. military halted all nationwide troop movements over the weekend.

Lastly, the Federal Reserve announced it would slash borrowing rates to near-zero and pump $700 billion into the U.S. economy to help during the financial crisis.

It is an unprecedented offensive against the viral outbreak with a big emphasis on “non-pharmaceutical intervention” which is believed to be many times more effective than quarantine measures alone.

“The American people can be confident that President Trump is going to continue to act, without hesitation, on the advice of our healthcare professionals to put the health & safety of the American people first.”

The U.S. Senate is expected to expedite the passage of a multi-billion dollar bill soon to fund defensive measures after the White House and House Speaker Nancy Pelosi reached a compromise on the House version of the bill.