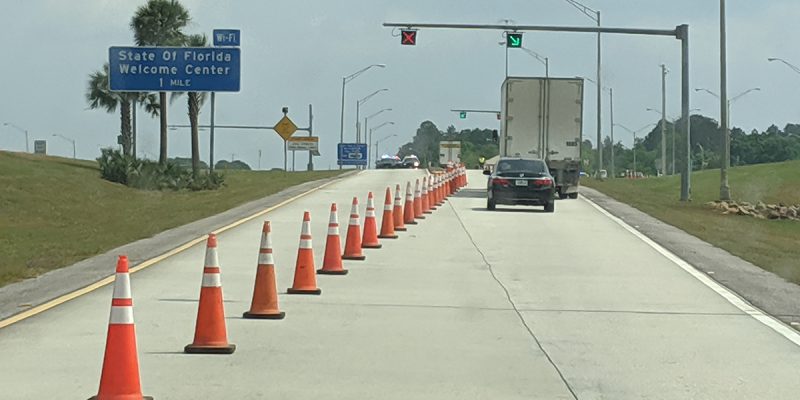 Governor Ron DeSantis issued an executive order adding people traveling to Florida who are from Louisiana or have stayed a night in the Pelican State to a 14-Day “self-isolate” order, with the highway patrol charged with enforcement along the state line Florida shares with Alabama and Georgia via checkpoints.

That a state would set up screening stations along the borders for more than weighing 18-wheelers was hard for me to even conceptualize.

And as we are living through an unfortunate historic time, I wanted to see how this “management” and “processing” of US citizens from particular states would play out.

One crosses from Louisiana to Mississippi without issue or even sight of that state’s highway police that strictly enforce the speed limit.

Going to Alabama also was unremarkable aside from the folks taking their liberties on relatively empty stretches of road.

And then came the first sign that I was leaving one state for another country as illuminated road work displays warned drivers to slow down and be prepared to stop.

Things were about to get curiouser and curiouser as orange cones forced traffic to merge to the far right lane while passing the Sunshine State’s large welcome display that I had passed numerous times while en route to spring training games.

Police cars with flashing lights parked in the blocked lanes served to alert motorists of the upcoming checkpoint that forced all traffic off of Interstate 10 East and into the pull off road for truck weigh ins. 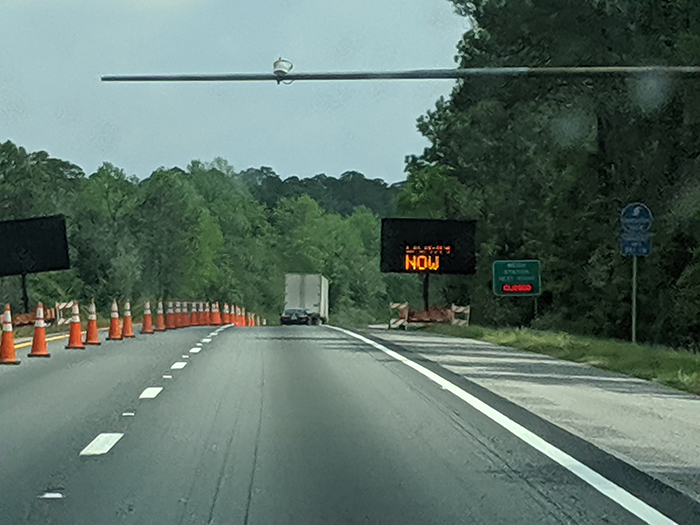 All around are cameras and transmitters positioned along the road though those could have been for the 18-wheelers and not for this irregular purpose.

At this point I got nervous, the kind of anxiety I felt when dealing with customs officials in difficult countries like Russia or Belarus.

And this was just a trip over the Florida state line.

What the hell was I pulling into?

Was I going to get quarantined some place for two weeks or arrested for “my papers not being in order”.

A grouchy deputy fussed that I had pulled into the wrong lane as the road was bifurcated with orange cones and a single deputy was positioned as if to separate the sheep from the goats and to point which lane you were to pull in.

If you were waved to the left lane, you continued back on to the interstate but being sent on the right side meant an inspection of sorts and paperwork.

After taking the slow turn towards the weight inspection building you check-in at a small blue pop up tent and are handed paperwork consisting of a double-sided questionnaire (I discovered that it had a back part later) and an information sheet on the Coronavirus spread and the terms of the self-isolation. 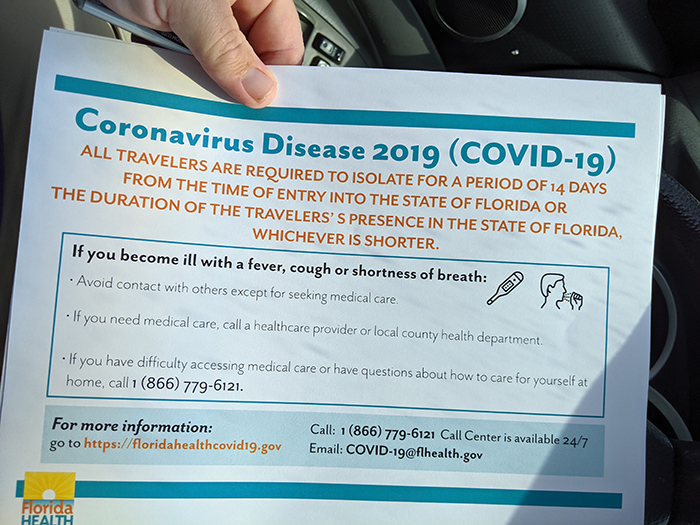 The paperwork was a full-sized sheet that looked almost identical to the landing form you filled out when flying from the US to Great Britain, though there weren’t any questions about having been in the proximity of livestock or whether you were carrying more than $15,000 in cash or items for resale.

Actually going through customs  in the UK is now a breeze compared to going to Florida.

The Florida “arrival form” required filling in your name, your home address, the address of where you were going in Florida, your date of birth (!), your driver’s license number (!!- there’s going to be some serious identity theft going on), your vehicle license plate (they filled that out), whether you are visiting for work or leisure, how long you would be in the state, your e-mail address, and your cell number.

As I had finished the form and turned it in, I was told there was a back page that asked for the names of everyone in my party and a signature acknowledging that I “understood” that any failure to comply with DeSantis’s quarantine order can be subject to prosecution with penalties ranging to up to 60 days of imprisonment (more quarantine!) and/or a fine of $500.

I dutifully filled out the form in my worst possible penmanship and claimed I’d only be in Florida for three hours though I was tempted to write the address of the local McDonald’s as my self-exile location but Florida and their awful governor whose name is prominently positioned at the top of the form (probably the true point of this entire exercise) didn’t deserve such effort.

Man they really took the Gators’ loss to LSU hard.

I noticed a few vehicles with Florida plates were also in “holding,” mostly minivans.

Ironically big rigs, the very vehicles these stations were built to catalog, were sent right on through the left lane.

When I rolled my window down to turn in my paperwork the masked and gloved staffer saw I was from Louisiana and literally stretched her arm out to the point of tipping over to retrieve my documents out of deathly fear of contracting Cajun cooties.

Her supervisor sans protective gear strolled up and I asked her a few questions about the limits of my activities (could I get gas, could I order drive-thru, how long I would have to stay) to which she said that because their procedures are constantly changing not to worry about anything but that I shouldn’t take this treatment personally as they were doing it to New Yorkers as well.

Contrary to her expectations, that didn’t make me feel any better.

After entering the Soviet Sector of the United States I turned off at the first exit (7) and headed south to the beach road that linked Alabama and Florida along the gulf, curious to see if they had state police or county deputies handling that checkpoint.

Now along the state line is a true landmark- the Flora-Bama bar/grill.

But there were no police or check points, just the shuttered beach bar and a lotto/packaged liquor store. 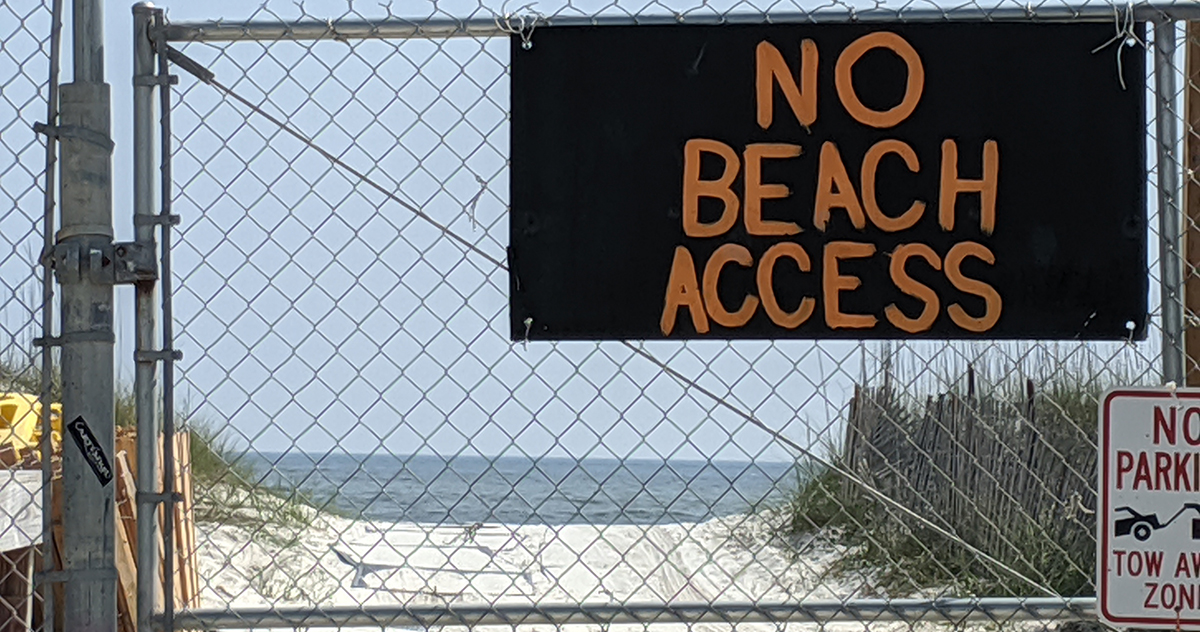 You could cross back and forth from Alabama to Florida without “papers” or incurring legal liability by signing a document.

And I’d imagine this is what you’d run into (or rather the bs you would not run into) taking state highways along the northern side of the panhandle from Alabama and Georgia making the I-10 “customs and immigration” operation a complete farce.