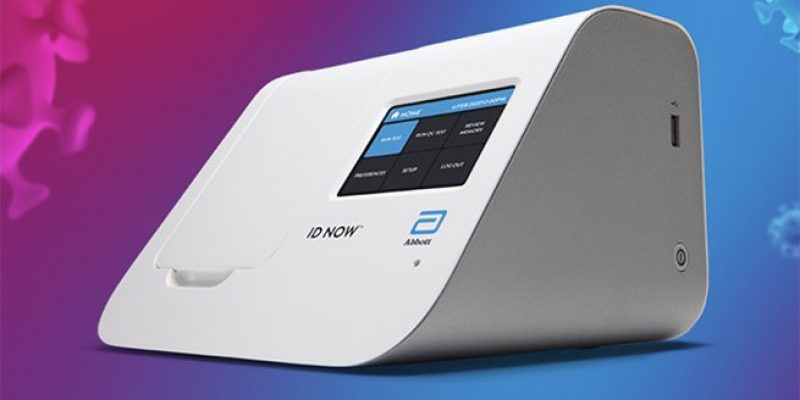 A few weeks ago, President Trump was tested for COVID-19 after he had come into contact with foreign officials who had tested positive.

He admitted that the test was “not something he’d like to do every day.”

With the need for testing on the rise, innovators across the nation are working on different means to combat the virus. Good news: Abbott Laboratories has reportedly developed a machine that can detect whether or not an individual is infected with the virus—in just five minutes.

Because of the emergency, Abbott has received authorization from the U.S. Food and Drug Administration.

The machine is also ultra-handy and portable, thus making it possible to store it in any setting. The immediate targets right now, however, are emergency rooms, urgent-care clinics, and doctors’ offices.

Experts are calling this a “game-changer.”

Bloomberg gives details on what takes place in the test:

The test starts with taking a swab from the nose or the back of the throat, then mixing it with a chemical solution that breaks open the virus and releases its RNA. The mixture is inserted into an ID Now system, a small box weighing just under 7 pounds that has the technology to identify and amplify select sequences of the coronavirus genome and ignore contamination from other viruses.

According to John Frels, vice president of research and development, Abbott has plans already in place to supply 50,000 of these tests starting tomorrow, April 1.

This isn’t just good news. It could be life-changing news.

It continues to be a season of darkness, yes. But already, as a new month and Easter approach, we are seeing the light slowly coming forth.

***UPDATE: Later on Tuesday, after the news of Abbott’s five-minute machine broke, the FDA issued an emergency approval for a serological testing kit produced by Bodysphere Inc. that can detect a positive or negative result for COVID-19 in just two minutes.

Interested in more national news? We've got you covered! See More National News
Previous Article BAYHAM: At The Florida State Line, “Your Papers, Please”
Next Article I’ve Got Another Book Coming Out, And You Can Pre-Order It Now…