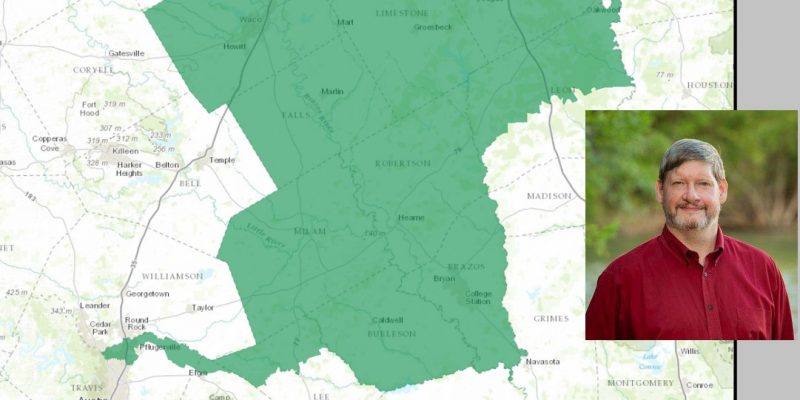 An 11-candidate race for Texas Congressional District 17 has winnowed down to two “more establishment” Republicans, according to a close third-place candidate.

For George Hindman (the candidate with the “rocket scientist” tagline who finished with 18% in the GOP Primary), endorsing former Dallas Congressman Pete Sessions (32%) over Bryan-College Station eye surgery business owner Renee Swann (19%) was a reluctant choice:

“It’s no secret I hoped March 3rd would have gone differently. We now have two candidates from the more establishment wing of the Republican Party, so we must choose who is best for our community. In my opinion, the choice is clear. Pete Sessions is the only remaining candidate who can unite Republicans from multiple factions in this community. Pete and his supporters spent their time in the primary talking about their campaign, not lying about their opponents. Furthermore, Pete has a better grasp of the issues facing our community and nation. Therefore, I endorse and will be voting for Pete Sessions in the runoff. Given the importance of voting in the May 26th election, I expect that many of my supporters will likewise understand the reality of our situation and vote for Pete as well.”

Swann had the backing of current Congressman for District 17 Bill Flores, who had earlier urged voters to tap local talent for his Central Texas seat. (Sessions countered that he was reared in the Waco area and he would be representing his home town.) She has also earned the support of former opponents David Saucedo (1%) and Trent Sutton (5%).

Candidates Elianor Vessali (9%), Kristen Alamo Rowin (2%), and Ahmad Adnan (1%) appear not to have made endorsements by the time of writing.

Sessions has taken the lion’s share of endorsements from the field so far. In addition to Hindman, Sessions is backed by former opponents Scott Bland (7%), Todd Kent (3.5%). and Laurie McReynolds (2%). Sessions represented a North Texas district for many terms until being unseated in the 2018 general election.

Republicans Sessions or Swann will likely face Libertarian Ted Brown and Democrat Rick Kennedy or Democrat David Jaramillo, depending on who wins the Democratic Primary Runoff. The May 26 Runoff has not yet been rescheduled, though Gov. Greg Abbott yesterday signed an order allowing for May 2 local elections to be postponed due to COVID-19 considerations.

From the hip: CD-17 is a geographically diverse district, covering Brazos, Burleson, Falls, Freestone, Limestone, McLennan, Milam, Robertson and part of Bastrop, Lee, Leon, and Travis counties. To translate for those not familiar with counties, that’s the Waco, Austin, and Bryan-College Station urban areas and all points in between. The easternmost residents of the district would not even call themselves Central Texans but instead Brazos Valley residents.

According to our prior analysis, it will take a significant war chest to reach three very different urban areas and two regions, not just notoriety within either. This was Session’s advantage, as a well-known commodity, much in the way of personal wealth, and a name that brings to mind a legislative term.

According to the most recent federal campaign finance reports, Sessions entered early voting with just $4,000 in the bank while Swann hung on to around $124,000. While Swann took the lead in fundraising, Sessions outspent Swann by about $215,000. The district is considered a strong Republican one, an this primary runoff will be the kingmaker, which means the money must be spent now to determine the next Representative of CD-17. We can expect the next fundraising report to give a clearer picture on what resources as available to either of the two remaining candidates and from whom other endorsements and support may be coming from.

The endorsements help, but Hindman’s loss demonstrated that grassroots conservative organizational support and enthusiasm (he had the backing of Empower Texans and was a frequent favorite of local Republican clubs) is not quite enough to win a spread-out district like CD 17. Follow the money in this one.