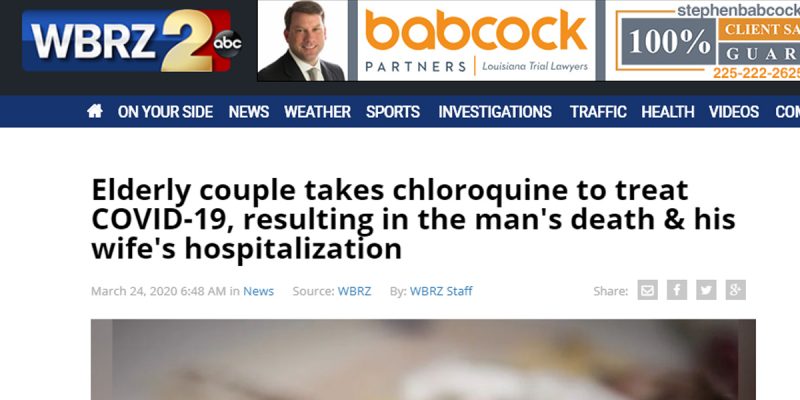 Who knows what just-out-of-J-school cub reporter wrote up this atrociously bad story at WBRZ attempting to trash a drug which so far shows signs of becoming a useful treatment against the Wuhan virus, but one would think the station would have some adults capable of exercising some discretion and spiking it.

The fact: a couple in Phoenix heard about the success some doctors are having with chloroquine, an old anti-viral drug (it’s been around since World War II, if not before) which has long been used to treat malaria and is also prescribed to patients for lupus and arthritis. President Trump has mentioned chloroquine, and its derivative hydroxychloroquine, as a potential breakthrough in solving the Wuhan virus crisis. Last Friday night on Fox News, Laura Ingraham had Dr. William Grace, an oncologist at Lenox Hill Hospital in New York, on for a segment in which Grace said that “on the front lines, we’re all using” chloroquine to treat patients with serious cases of the Wuhan virus; Grace said that LEnox Hill had more than 100 patients and none had died thanks to the positive effects of the drug.

At this point you’re probably wondering how on earth it could be Trump’s fault if a couple of morons in Arizona are drinking aquarium cleaner as medicine because the same word that came out of his mouth appears on the label of a bottle they’ve got next to their fishtank. Welcome to American news media, circa 2020.

And here’s now WBRZ in Baton Rouge handles the story…

Last week, as President Donald Trump and the Coronavirus Task Force addressed the nation regarding the COVID-19 outbreak, Mr. Trump recommended the use of the drug Chloroquine as a possible treatment for COVID-19.

Days after this announcement, a Phoneix-area man died and his wife remains in critical care after both took chloroquine phosphate in an attempt to self-medicate for the novel coronavirus.

According to a CNN report, experts say the medication should not be ingested to treat or prevent the virus.

An Arizona-based wellness facility called Banner Health treated the deceased man and his wife following their ingestion of chloroquine. The facility did not provide any details on how the couple, both in their 60’s, acquired the drugs.

However, according to the statement, “within thirty minutes of ingestion, the couple experienced immediate effects requiring admittance to a nearby Banner Health hospital.”

During a press conference and in a tweet, the President said that chloroquine, and the closely-related hydroxychloroquine, would be potential game-changers in the fight against Covid-19.

But at this time, health officials are warning against taking any of these drugs until further studies are carried out to ensure that each drug is safe for consumption and effective in fighting the illness.

Dr. Anthony Fauci, the nation’s top infectious disease expert and a key member of the White House Coronavirus Task Force, has said the drugs may be effective against the novel coronavirus. However, he told CBS’ Margaret Brennan on Sunday that Trump had heard about the hydroxychloroquine and azithromycin combination’s effectiveness from anecdotal reports.

“I…have said I’m not disagreeing with the fact anecdotally they might work, but my job is to prove definitively from a scientific standpoint that they do work,” Fauci said.

Nowhere in that piece, which doesn’t even bother to distinguish the fact that what these people took was not actual medicine, is there any mention of what’s really happening here – which is that the media has whipped Americans up into such a frenzy over a virus which so far has claimed 582 of some 330 million lives in America that healthy people are drinking chemicals intended to rid fish of parasites in an effort to protect themselves.

This has to be Trump’s fault. It certainly can’t be the fault of irresponsible, sensationalist reporting from outlets like WBRZ.

What effect do stories like this have? Well, with enough bashing of chloroquine, people won’t want to take it even when doctors are convinced it’s what will best fight off the Wuhan virus. Or worse, doctors will be afraid to prescribe it out of fear they’ll get sued for malpractice should something go wrong.

At some point we’re going to have to have a conversation about America’s legacy media and whether they’ve become so toxic as to constitute a societal threat. When we do, this little episode is an example to raise.