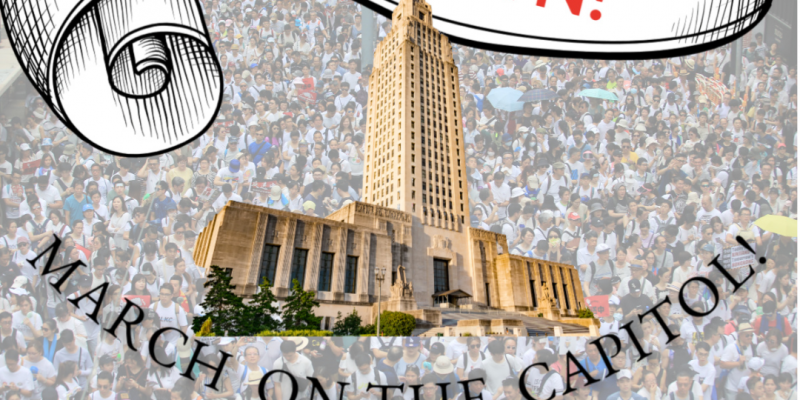 President Donald Trump has rolled out the “Opening Up America Again” guidelines. He has invited state cooperation across the board. There is plenty of dissent online from concerned American citizens not willing to allow government to use this virus to score powers they will be unwilling to give back to them when this is all over.

Even two hair salon owners in Auburn are opening up their shops in order to pay the bills. Seems there is some good that can come out of Auburn after all.

But in all seriousness, this, the reality of the virus notwithstanding, is good news. If the Trump administration’s plan is to move forward gradually, by the protocol’s very description, that means the states have to start somewhere, however slowly or quickly that might look.

A dead nation will have many dead citizens, coronavirus or not.

Governor John Bel Edwards is saying that reopening the state isn’t as easy as some people think.

Edwards explained, “I really don’t need anybody protesting to tell me that we ought to open up the economy as soon as we can. I get it. Nobody wants to do that more than I do.”

Edwards said that his team is collecting information from federal partners and working with President Trump and Vice-President Pence on their coronavirus response plan. But we also know that Edwards has dragged his feet all along on shutting down abortion clinics, which likely makes some residents of Louisiana hesitant to get behind him, perhaps even to trust him.

Thus, in our opinion, it is good to keep the pressure on, to make sure he knows what this state wants.

The Hughes family, Brenda and her husband Tim, said they want people to stand up for our freedoms.

“I’m not gonna say please governor. I’m telling you governor. Give me back my rights. Give ’em back now,” said Mrs Hughes. “We need to go back to work.”

Mr Hughes added, “We’re not crazy. We just want the state to open so the economy can start rolling again.”

Of course this issue goes beyond economics, even though that in itself is enough. Many U.S. citizens are concerned about other rights, such as attending church, being under attack. It is important that local and state government leaders know that its citizens will not go to sleep, that enough rights-seeking individuals will stay vigilant in making sure they don’t try to infect the states and this nation with their power-hungry, police-state tactics.

The Hughes are part of a group planning to take part in a march on Saturday, called “End the Shutdown.” Louisiana is just one of several states recently conducting such peaceful protests.

One of those concerned citizens has written a letter to The Hayride, asking that we invite our readers:

Please forgive me if my plea is out of line or offends your sensibilities.  I feel very strongly about the politicization surrounding  what I feel is a real but overestimated threat in the coronavirus pandemic.

If you remember, the #1 reason for closing the economy was to not overwhelm the hospitals so as to limit the number of people being turned away at any given time. No one was thinking at the time that we were going to avoid the virus spreading as much as we were going to limit the number of people who might otherwise go untreated. You have all seen the news, but there is so much bad, contradictory, or just intentionally misleading information being shared in the media.

That was then….this is now:

-Our economy remains closed as if hundreds of thousands to millions of Americans are still expected to contract it. Most of the hospitals and makeshift triage units across the country with very few exceptions are actually underwhelmed, with some laying off staff.

-Millions of Americans are now unemployed with more to come if things don’t change along the lines of Trump’s “Opening Up America Again.”

The medical situation is improving, but the economic outlook is deteriorating very, very quickly. The majority of our businesses (mostly the small to mid-sized ones) are still closed. Food supply chains are bottling up, and food processing plants are closing.  Thousands upon thousands of restaurants nationwide will never re-open as of the end of April with more to follow as this shutdown goes on.

I believe in American ingenuity. I believe that we can walk and chew gum at the same time. Let’s re-open our economy now and be careful in our interaction with other humans, a balanced effort both to save people’s livelihoods (and lives, in some cases) and to limit exposure. Those who are compromised and understandingly fearful can self-quarantine. The healthy among us can tow the economy and make adjustments as needed.

If you are healthy and ready to stand up against what feels like an oppressive and unnecessary (at this point) state government response to this tragedy, please join us for a peaceful protest to stand up to that tyranny. It is a governmental approach that is driving our economy and country into despair. Millions died of starvation and suicide in the Great Depression of the 1930s.  Hundreds of thousands will commit suicide in a deep recession if it happens in the 2020s. There is no proof that the economy will snap back immediately and the jobs will magically reappear. In fact, there is historical evidence to the contrary. And the rights we are losing if we wait too long are even  more likely to be gone for good. Historical precedence says so, and despite our comfort and stability, America is not immune to historical precedence. Let’s fully reopen Louisiana now and limit the economic disaster we know is coming, that has already begun. The constitution says we have the right to assemble, worship, go to work, and pursue happiness. May we not not surrender that! The constitution never guaranteed to alleviate any risks in doing so, but this peaceful protest is mild compared to the risk we are taking if we do nothing. 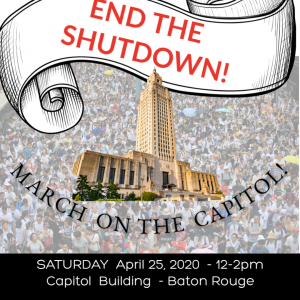