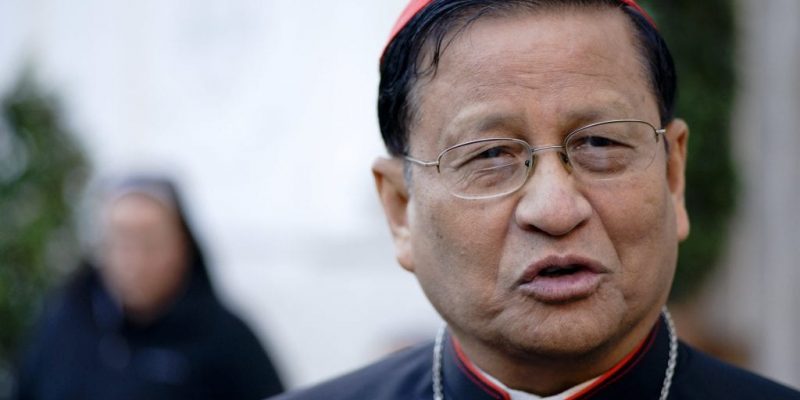 Everyone knows it. Even President Donald Trump has backed off calling the virus by its “Wuhan” name because, as he says, there’s no point in continuing to state the obvious.

Conversely, a top official in the Catholic Church is both recognizing and hammering home that obvious.

Myanmar Cardinal Charles Bo, president of the Federation of Asian Bishops’ Conferences (FABC), has pointedly put the blame at the feet of China’s communist government.

“The Chinese regime led by the all-powerful [Chinese President Xi Jinping] and the Chinese Communist Party–not its people–owes us all an apology, and compensation for the destruction it has caused.”

For Catholics, “compensation” is another word for what they term “reparation.” Reparation for sins.

And most certainly, the Chinese communist government has blood on its hands.

“At a minimum it should write off the debts of other countries, to cover the cost of COVID-19,” Cardinal Bo said. “For the sake of our common humanity, we must not be afraid to hold this regime to account.”

“An epidemiological model at the University of Southampton found that had China acted responsibly just one, two, or three weeks more quickly, the number affected by virus would have been cut by 66 percent, 86 percent and 95 percent respectively. Its failure has unleashed a global contagion killing thousands,” Bo claimed.

Contrast this viewpoint from the East with the American media’s and Democrats’ obsession with blaming President Trump.

Bo conceded that many governments failed to prepare for the pandemic when first reports surfaced from Wuhan. He was adamant, however, in asserting that there was “one government that has primary responsibility, as a result of what it has done and what it has failed to do, and that is the Chinese Communist Party regime in Beijing.”

Despite his clear vitriol toward the communist regime, Bo was clear that the responsibility does not fall on the Chinese people, that there should be no racism toward Chinese people, and that the Chinese were unfortunately the first victims of both the virus and a “repressive regime.”

Bo listed a number of failures by that regime in addressing the growing catastrophe:

“Lies and propaganda have put millions of lives around the world in danger,” Bo said.

Bo said that his Myanmar is “extremely vulnerable” to the spread of the coronavirus, since it borders China and the nation is so poor and over-crowded. In Myanmar, social distancing measures simply are impossible to enact.

It is yet another story, this one from another part of the world, that shows why we must not rest in holding China accountable. American media and Democrats would do well to listen to someone like Cardinal Bo, someone who lives so close to ground zero.