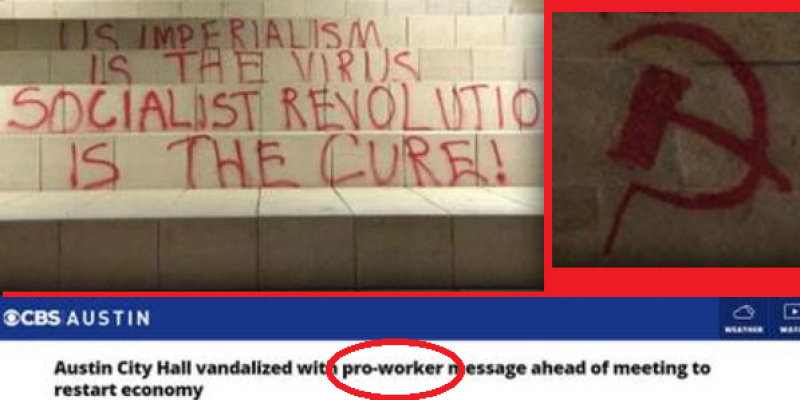 Austin City Hall, located several blocks south of the Texas Capitol on Cesar Chavez Boulevard, was vandalized early Tuesday morning by three males according to surveillance video. The vandals splashed red paint on the glass entrance of the municipal headquarters and left Communist messages on a nearby outdoor seating area.

“US imperialism is the virus. Socialist revolution is the cure,” one message read, accompanied by a sickle-and-hammer and other marks indicative of Marxist affiliation. Watch the video of the vandalism below:

Local media outlets were reluctant to call the graffiti communist, socialist, or some variant of Marxist. At least two television outlets called the graffiti “anti-capitalism.” Another referred to it as a “pro-worker message.” Try a search and see for yourself: communism is nowhere to be found in the headlines and lede paragraphs.

“Austin City Hall vandalized with pro-worker message ahead of meeting to restart economy,” the headline from CBS Austin reported.

From the hip: All irony aside about the headquarters of the all-Democrat Austin City Council being tagged by radical communist propaganda, that the press did not accurately identify the message is disturbing to anyone who grew up during the Cold War and grasps the threat that communism represents to the American way of life.

We checked and could not find any advice in the latest Associated Press Stylebook available that reporters should wear the kid gloves when it comes no not offending communists or socialists. Given, the motive is not clear and the apparent suspects could have posed as radical socialists for unknown reasons.

Consider another scenario: If these vandals left a message concerning white supremacy, it would likely be identified as racism, along with cries of hate groups on the rise in Texas (and without any consideration of it possibly being a false flag). We would call it racist on its surface, too. Who wouldn’t?

What about an anti-tax slogan smeared on to the city hall steps? You can bet your bottom-dollar the headlines would read “far-right” or “extremist” vandals attacked the seat of local government, followed by interviews with local Democrats about how their policies help rather than harm businesses (which are fleeing Austin, by the way).

But actual communist propaganda? Complete with a sickle-and-hammer, red paint, and a precise socialist message? It doesn’t get much more communist than that. To call it exactly what it is must be considered a slur according to the radical leftists who influence the city’s political direction and media coverage.

To call it “pro-worker” is either complete ignorance or a slap in the face to fiscal conservatives. Both left and right spheres of political life can claim being on the side of the working man as a central tenet; even though various communist entities have capitalized the term in an effort to represent an imaginary “working class” of everyday folks and poster-children of the Industrial Age who apparently want most of their income going toward taxation and having it redistributed and used to control the economy (e.g. the Communist Workers Party). Republican icon and President Ronald Reagan masterfully turned that image on its head, even recently being inducted into a labor hall of fame despite his union-busting reputation.

This graffiti situation is a prime example of the predicament conservatives in many of Texas’s largest cities are in when it comes to expecting fair and balanced media coverage. It gives “red state” a whole new meaning, don’t you think?

This article also appeared in The Travis Tracker.