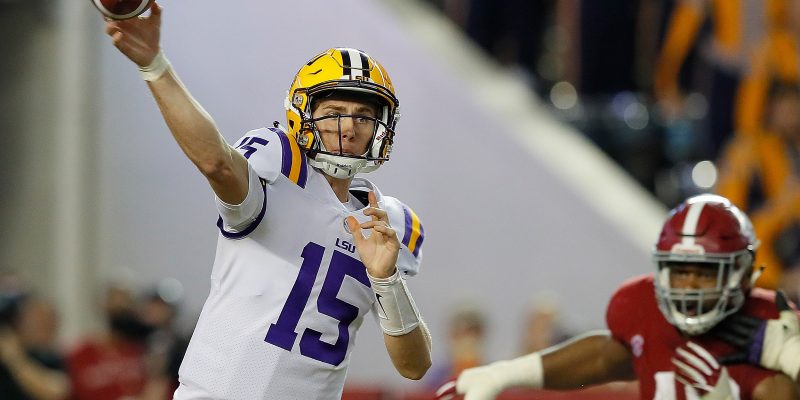 For every program in the country, spring practice and the spring game, of course, were cancelled weeks ago.

For LSU’s presumptive starting quarterback Myles Brennan, it meant having to play the waiting game–again.

Recently, on “The Big Podcast with Shaq”, departed quarterback and soon-to-be top NFL pick Joe Burrow was asked about the man expected to take over the reigns for LSU.

“He can really spin it,” Burrow said. “He was getting some time the year before I got there, splitting time with Danny Etling. He’s going to be a really good player. He’s a smart dude…. I’m excited to see what he can do this year.”

Yes, we have slightly more pressing issues on our hands in the world today than college football. But for a young man just turned 21 in March and waiting patiently behind Burrow for two seasons, it must seem like cruel fate at times to have to sit on the sidelines yet again.

It does appear, however, that Brennan, who reportedly “looked like a different guy” in that limited spring work. is doing what he can to make sure his teammates still recognize him whenever they do reconvene.

The rising junior quarterback has been working to build chemistry with his wide receivers, despite the fact that the everything surrounding the coronavirus pandemic has largely shut everything down, including the possibility of in-person contact among football players.

Through frequent phone contact and discussing the offense, and solidifying what they talk about from any virtual work they can do, Brennan is taking the lead to make sure the Tigers stay at the top.

It was one of Burrow’s best traits, and with Brennan apparently on that same path, a New Year’s Six bowl or better could be in the Tigers’ future, assuming life goes in that direction by the fall. Plus, it’s not like Brennan is an incoming freshman. He has been learning under offensive coordinator Steve Ensminger, the departed Joe Brady, and of course Burrow. He had the distinction of being able to absorb from a Heisman winner everything he could from a schematic and intangibles standpoint.

Interested in more news from Louisiana? We've got you covered! See More Louisiana News
Previous Article AVALLONE: Moving Heaven And Hell To Save Lives, Or Some Of Them
Next Article SADOW: Louisiana’s Budget Is Going To Need Some Serious Cutting