As our readers know, we try not to spend too much time on the inner workings of Louisiana’s budget process, because to do so would drag you impolitely through the weeds and inflict upon you a sense of hopeless desperation. There is only so much of that anyone wishes to have put upon them, and therefore we try to tread lightly.

But occasionally, it’s necessary to plumb the depths of the state budget to keep you informed, because Lord knows the state’s mainstream media won’t do that.

The Advocate had an article last week declaring, essentially, that the Legislature fully agrees with Gov. John Bel Edwards on the budget and it’s essentially passing his document with much in the way of changes.

That was Sam Karlin’s take. You should understand that whatever Karlin writes is what the governor’s office wants written.

If you want to take a deeper dive into this than we’ll present here, we’d suggest going straight to the source. Click here, and then hit the green banner and you can get exact numbers and summaries of what the House is up to.

The fact that the Legislature and the governor are not in as much accord on the budget as Karlin would have you believe can be most easily seen in the bill number of the budget. The state budget is, by custom, known as HB 1, but it isn’t this year. The reason? This year HB 1 was filed using the governor’s revenue estimate, and that estimate differed greatly from the one the Revenue Estimating Committee presented to the Legislature. Our readers will remember that controversy earlier this year – Edwards and his Commissioner of Administration Jay Dardenne insisted on a wildly-optimistic estimate of state revenues which they were unable to get House Speaker Clay Schexnayder or Senate President Page Cortez, or even the state’s economist Stephen Barnes, to agree with. So HB 1 was a dead letter from the beginning and the budget the House will vote on later today is HB 105.

Nevertheless, it’s true that some of the elements in the governor’s proposed budget have been adopted by the House and that there is, so far, less willingness to do a full scrubbing of the budget than there should be. The House has included a few additions to the budgets of various agencies, including $25 million in additional money for early childhood education, another $25 million for higher education, a slight increase to the state’s Minimum Foundation Program which helps to fund K-12 education, and so forth. But the House Appropriations Committee knocked $103 million out of the budget for the Louisiana Department of Health, which it believes is vastly overfunded.

The new budget forecast calls for a $900 million revenue shortfall in the 2021 budget. As such, the Edwards administration proposed a two percent across-the-board cut to state agencies with some exceptions and then a reliance on a bunch of one-time money from the federal government to fill the budget holes. You’ve heard that Louisiana picked up $1.8 billion in federal funding from the CARES Act; Edwards wants to use $990 million of that money to fill in the budget. Doing so means there aren’t any real cuts in the budget and we’re right back to where we were when Bobby Jindal was the governor and the state’s news media went consistently wild screaming about how irresponsible it was to use one-time money for recurring expenses.

Anybody hearing that screaming now? Of course not. And you already know why.

It’s worse, of course, because not only is it a bad idea to use one-time money for recurring expenses but in this case the state isn’t supposed to use CARES Act money to cover revenue shortfalls. The feds have already declared it forbidden to do so. And yet it’s happening, and there’s an interesting story to that.

Remember that we’re currently in FY 2020, and the COVID-19 virus and the collapse in oil prices has an effect on this year’s budget as well as the one the Legislature is voting on today for next year. The difference is that Louisiana was looking at a budget surplus for FY 2020, owing to the fact the government is overtaxing the hell out of a nearly-moribund economy – so the economic shutdown in the state merely shrinks a surplus for this year before it collapses revenues for FY 2021.

So what you do is move as much of your expenditure as possible into FY 2020 and eat up that surplus first. That’s what HB 307, the supplemental budget bill, does, to the tune of $257 million. To boil this down perhaps more than it should be, they’re covering payroll expenditures for this fiscal year with federal virus relief dollars – most prominently in the state’s Department of Corrections budget. Why? Because DOC has had to deal with lots of COVID-19 patients in the prisons. Some $79 million in general fund dollars came out of DOC’s budget, and $90 million in CARES Act money went in. And with that $90 million, DOC’s budget is magically now what they had requested in January when they thought they’d have a big surplus to spend.

That’s just an example. There are others. Like the $97 million for higher education which got moved to the FY 2021 budget thanks to CARES Act dollars being plugged in this year. Without dragging you too far into the weeds, this is the kind of budgetary prestidigitation Edwards and the House Appropriations Committee have been cooking up.

There’s more of that going on in the main budget bill for FY 2021. It isn’t good.

They’re continuing the process of “making cuts” to state agencies in the general fund, but then backfilling those cuts with CARES Act money. To the tune of a half-billion dollars’ worth. The Department of Corrections is the scene of some $190 million in shifting money, which is almost 20 percent of the budget shortfall being covered in one fell, shady, swoop. Another $153 million of shifty CARES Act money backfilled a cut in the Louisiana Department of Health’s budget. And so on.

Which is why Dardenne walked out of the Appropriations Committee meeting last week acting like everything was copacetic and Karlin reported there was no problem with the budget.

He and Karlin might even be right, but there isn’t as much joy among the legislators as the Advocate presents. The question is whether the House floor will be irritated enough by the funny business to make trouble for the budget, or whether the reception the Senate gives to it after it passes will be as kind.

But then there is HB 2, which is the capital outlay budget. And that’s been an interesting departure.

Essentially, HB 2 guts the administration’s priorities on funding. The Coastal Protection and Restoration Agency’s project budget took a $50 million hit. A ton of non-governmental organizations and low-priority local projects got zeroed out. The Department of Transportation and Development took about a $200 million hit because that money went toward debt defeasance. There’s only $34 million in the whole capital outlay budget for legislators to fight for on local projects. What that means is Edwards has no more leverage to threaten to pull projects – the response from now on is “what projects?”

The capital outlay bill still includes all the multi-year project funding items it usually does, but it’s greatly stripped down and it’s no longer the political tool it used to be. That’s a nice change.

Meanwhile we’re left with that CARES Act problem. In four or five years the feds are going to do audits of how that money is spent, and when they do you’re likely to see a real fiscal cliff – because the funny business going on with Edwards’ and Dardenne’s budgets will make a bill come due.

Then there’s the question of CARES Act money going to local governments. That’s also a mess. Federal guidance says the state can – not must, can – use up to 45 percent of that $1.8 billion to reimburse local governments for fighting the virus. The legislature is in charge of appropriating that money, but Edwards is trying to take it on himself to usurp that power, which has infuriated the legislators – and that’s why this sheet circulated all over social media over the holiday weekend… 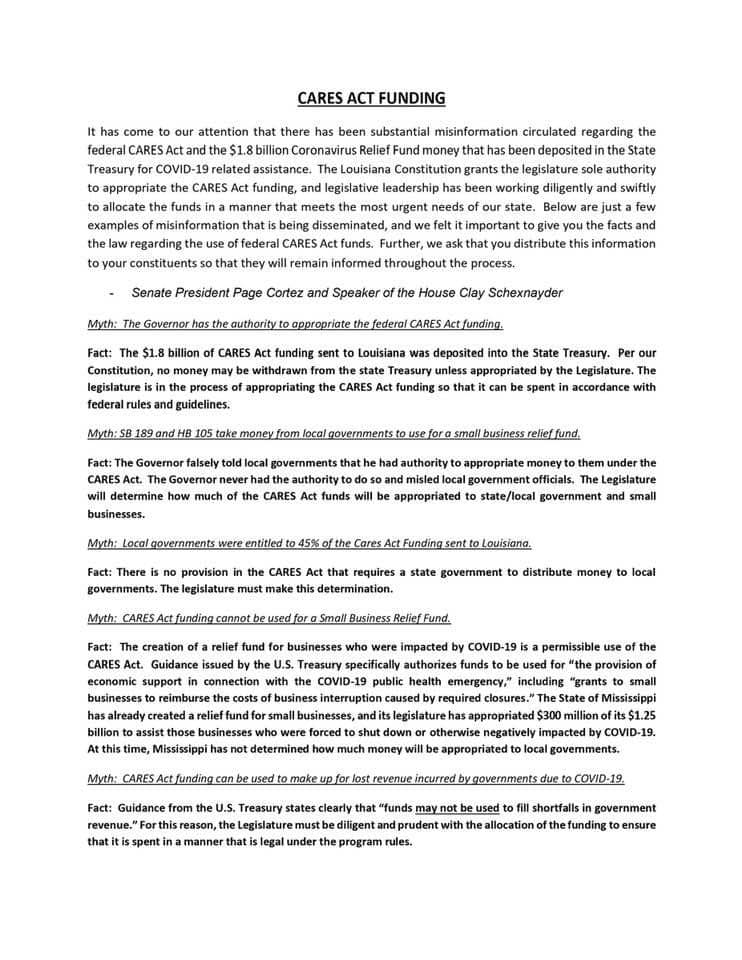 The question now is whether Edwards has so irritated the Legislature and its leadership as to blow up the budget completely. Seeing as though the Legislature called itself into a special session which starts right after sine die of the current regular session June 1, it’s possible they might just blow the whole thing up and start over.

We’ll find out later today what direction things are moving in.

Interested in more news from Louisiana? We've got you covered! See More Louisiana News
Previous Article SEABAUGH: I’m Not Through Circulating That Petition, You Know
Next Article Move Over, Nail Salons: Waterparks Now Defying State Orders In Order To Reopen