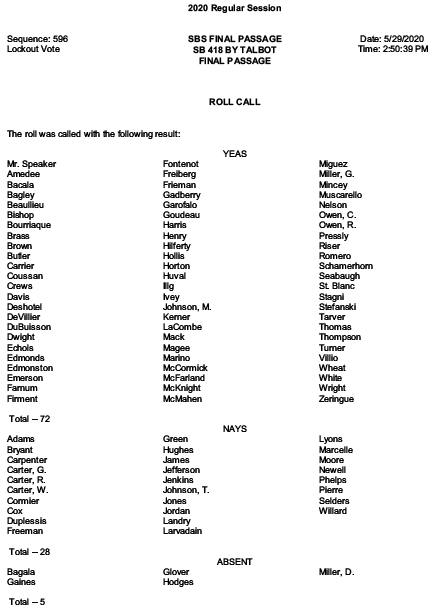 Republican Valerie Hodges missed the vote; she would have been a yes. That means there were six non-Republicans crossing the aisle and backing the bill, making it one of the worst legislative disasters ever suffered by a sitting Louisiana governor.

John Bel Edwards and his people reportedly pulled out all the stops in an effort to stop SB 418 from a veto-proof passage in the House, threatening and cajoling every Democrat they could. It didn’t work.

The half-dozen non-Republicans who voted to move the bill to Edwards’ desk were Ken Brass (D-Vacherie), Chad Brown (D-Port Allen), Jeremy LaCombe (D-Livonia), Joe Marino (I-Gretna), Melinda White (D-Bogalusa) and Francis Thompson (D-Delhi). Most of those are at least mild surprises; in a couple of cases it’s a good bet that committee assignments were traded specifically for this vote. In the case of Thompson and White, it’s likely that the logging industry and what high auto rates are doing to it had something to do with the vote.

This is one of those scenarios where Edwards is going to have to agonize over his veto decision, because either way he goes he’s in severe danger of a bad outcome.

Usually when a bill passes with veto-proof majorities in both houses, it’s not worth vetoing – particularly in Louisiana. You veto the bill and it gets overridden, and it’s a big deal; it’s been two decades since there was a veto override in Louisiana, and that bill was an abortion bill that Buddy Roemer, then on his way out, got run over on. So if Edwards vetoes this, there’s a chance he could pick off four House or Senate members and manage to keep that veto intact.

A chance, but not a particularly good one.

Or he could let it drop and just sign the bill – or allow tort reform to pass into law without signing it. If he does that it’ll be seen as a major betrayal to his number one special interest, the trial lawyers. They wouldn’t forget that, and it would likely mean the end of his political career – all he really has left is a possible Senate run, with a little bit of buzz that he would maybe take on John Kennedy when the latter’s seat comes up for re-election in 2022. The trial lawyers don’t completely hate Kennedy, so failing to veto this bill might be a good way to dry up what money Edwards might dream of raising from them for that race.

Edwards has shown himself deathly afraid of having his veto overridden. Last year, a bill he fought tooth and nail against which provided for health insurance coverage of people with pre-existing conditions in the likely event Obamacare is thrown out by the Supreme Court, but when that bill passed with 30 votes in the Senate and 85 in the House, he signed it and even claimed credit for signing it on the campaign trail as observers stood aghast at his chutzpah.

But Edwards is a lot more beholden to the trial lawyers than he ever was to the national Democrat Party.

He’s in a real pickle on this one.

SB 418’s passage is the culmination of millions of dollars and countless hours of time and effort in electing the current legislature, and a significant tort reform package to lower auto insurance rates particularly for the transportation industry is probably the single greatest achievement of Louisiana’s business community since Right-To-Work passed in the 1970’s. It would be a shame if all that work went down the drain should Edwards veto the bill and peel off enough of its majority vote to sustain his veto.

Either way he goes, though, we’ll bet on the bill’s passage sticking. The trial bar screams tort reform won’t lower car insurance rates, but given that all the elements in the bill would bring Louisiana’s rules on personal injury lawsuits closer to the rest of the country it’s difficult to see how it would do any harm to those rates even if it doesn’t move the needle as much as the business community says.