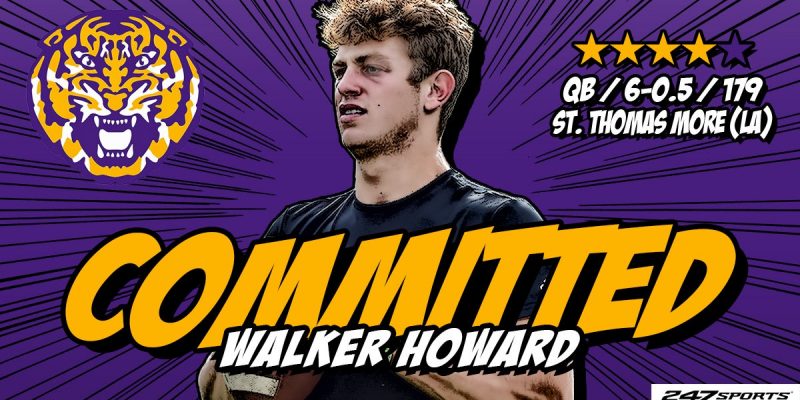 LSU quarterback Jamie Howard was the starter when then-head coach Gerry DiNardo’s team brought back the magic to Tiger Stadium in 1995.

Now already a quarter of a century later, his son Walker Howard will be continuing the family legacy as a Tiger.

One fascinating fact about the No. 3 ranked quarterback and No. 62 overall prospect in the 247 rankings is that, he has yet to be a full-time starter for St Thomas More in Lafayette. The 6-1, 185-pound rising junior has played the backup role behind Louisiana Tech signee Caleb Holstein, who led the Cougars to the state title in 2019 and finished his career with every passing record in school history.

Quite a talented pair STM had last season.

“LSU is where I’ve been raised. I’m a Louisiana boy so that’s a really awesome opportunity for me,” Howard said back in February.

Presumptive starter Myles Brennan will have his work cut out for him to keep the job, although his journey has also followed the blue-chip trail. His edge in the arms race is not only his experience, but the quality of that experience in backing up a Heisman Trophy winner.

It has become a very different problem very quickly in Baton Rouge, as no longer does it seem the Tigers will be hurting to field a quarterback who can adequately complement a historically dominant run game and defense.

Reportedly, LSU is looking to add yet another quarterback to the 2021 class. They recently lost out on one of their targets—California native Miller Moss, who committed to USC. Despite choosing the Trojans, Moss had some telling things to say about LSU and their recruitment of him.

“The same can be said for LSU. Obviously, they’re not where Alabama is in terms of the history but they’ve been really successful in the past couple years,” Moss wrote.

“The way they handled it shows as well. They said ‘best of luck’ and they threw in a, ‘see you soon!’ Which I’m not sure what that meant [laughing] but it made me have a lot more respect for those schools.”

Had Moss committed to LSU, it would have left a glaring question in their pursuit of No. 1 ranked quarterback Caleb Williams, who has the Tigers squarely in the mix for his services.

It isn’t QBU quite yet, but certainly it isn’t a stretch to assume that there will be some phenomenal talent entering the transfer portal in the next couple of years.

Right now it is inconceivable that any of that talent might be Walker Howard.

The addition of Howard to the 2022 class lifted LSU to the No. 1 spot in the 247 class rankings, a roster that includes a whopping four top-100 prospects already. This may not yet be the juggernaut on the recruiting trail Southern Cal was in the early 2000s, but Orgeron, who coached at USC, has said building a similar dynasty in Baton Rouge is possible. Certainly Tiger fans are seeing a more well-developed and smarter approach to recruiting than in years past.

Not only will Howard bolster LSU’s raw talent base, but the program seems to be getting a deeply layered and faith-based young leader, one who included the untimely death of his mother to cancer as the main inspiration in his announcement video:

“To Mom, my best friend, I want to thank you for making me the man I am today. I know you are smiling down on me. I want to thank you so much for helping me make the hardest decision of my life. My childhood dreams are coming true. I love you and miss you.”

Howard chose the Tiger over offers from schools such as Alabama, Texas A&M, Ole Miss, Penn State, Arizona State, and many others. “LSU is where I’ve been raised,” he said, and Tiger fans couldn’t be happier to be welcoming yet another home-grown star into the family.

Interested in more news from Louisiana? We've got you covered! See More Louisiana News
Previous Article Despite economic recession and record national unemployment, mortgages past due remain at 20-year average low
Next Article Democrat Congressional Candidate Confuses Police With Rioters In ‘Burn It To The Ground’ Remark