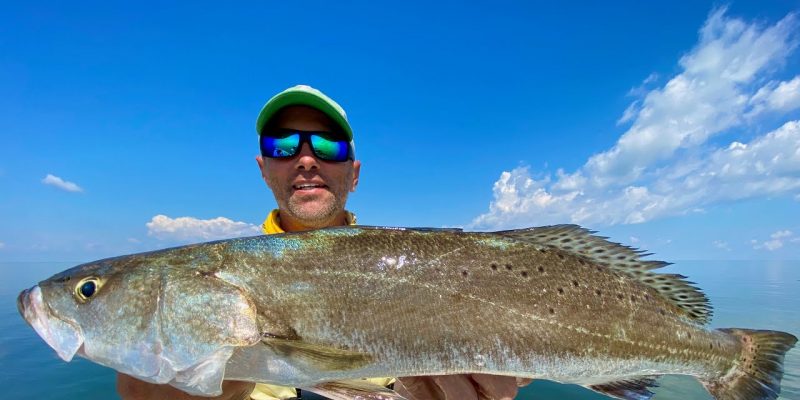 Sharks are ever-present on wade-fishing trips. It’s just part of the deal. You know that going in. If you have a severe galeophobia, you take up golf or needlepoint; you don’t get in the water with fish that have more teeth than a chastity belt.

Almost a decade ago, I flew to Breton Island with the late Capt. Theophile Bourgeois. He circled the island, and didn’t see a whole lot of bait, so he headed north to Gosier Island. There, Bourgeois tipped the plane on a counterclockwise arc to give us a better view of the water, and there was bait everywhere.

What was also there were more sharks than I’d ever seen in any Discovery Channel special. They circled the island like alligators in the king’s moat.

Content that he saw what he wanted, Bourgeois lowered the flaps to land the sea plane on the back side of the island.

“Theophile, what are you doing?” I asked. “You didn’t see all those sharks down there.”

“Aw, brah,” he responded, “those sharks aren’t going to mess with you.”

He was right — they didn’t — and we proceeded to have one of the best fishing trips of my life.

I thought of that day while fishing last week at the northern Chandeleur Island chain with my good friends Capt. Justin Bowles and Kevin Ford.

After spending a short night at the Chandeleur Islander, we arose well before dusk to watch the sunrise while standing in the water at a grass flat that held speckled trout the day before.

We hoped those fish would hit topwater baits in the early morning hours, and boy, did they ever. We were having one of the greatest fishing experiences of our lives when I felt something significant in size bump my right leg.

I looked down to see a 5-foot shark staring at the fish in my floating basket. Needless to say, I became perhaps the second man in world history to walk on water.

After I collected my wits, I continued fishing, and Ford’s producer Gemini Ceasar made his way toward me. He complimented my dance moves, and then told me what I thought was one shark was actually five. He watched them move toward me while flying a drone overhead.

“I wanted to let you know they were coming, but you were too far away,” Ceasar said.

Though it was certainly frightening at the time, the shark encounter only served to make this trip even more special.

Fortunately, I got it all on camera. To see it for yourself, check out the video below.

Like the video? Please give it a thumbs up, and subscribe to the Marsh Man Masson channel on YouTube. Also, leave a comment below or on the YouTube page. Have you ever had a shark encounter while wade fishing? If so, tell us about it.

Interested in more news from Louisiana? We've got you covered! See More Louisiana News
Previous Article In Alexandria, The Anatomy Of A Near-Miss Police Shooting
Next Article Does The June Medical Services Decision Prove John Roberts Is Compromised?