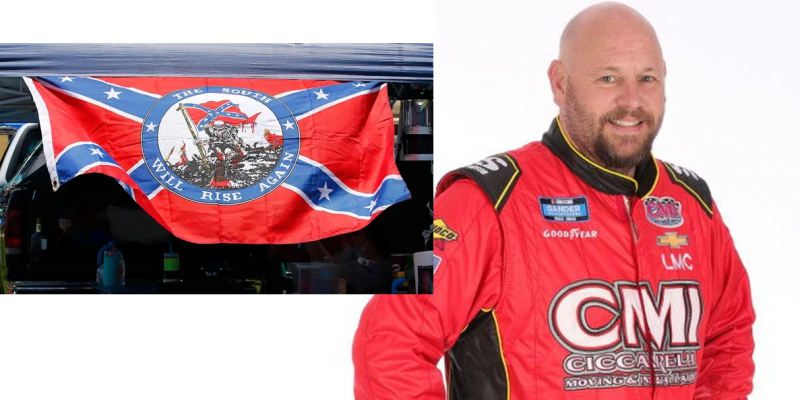 Scuttling the Rebel flag this week is the tip of the iceberg when it comes to a popular motor sport’s attempts to address ratings and attendance that have been in decline since 2005.

Institutional woes for the National Association for Stock Car Auto Racing (NASCAR) have been brewing for many years, according to a driver who announced his is leaving after the 2020 season. Ray Ciccarelli‘s wife announced colorfully on her husband’s Facebook page in a now-deleted post: 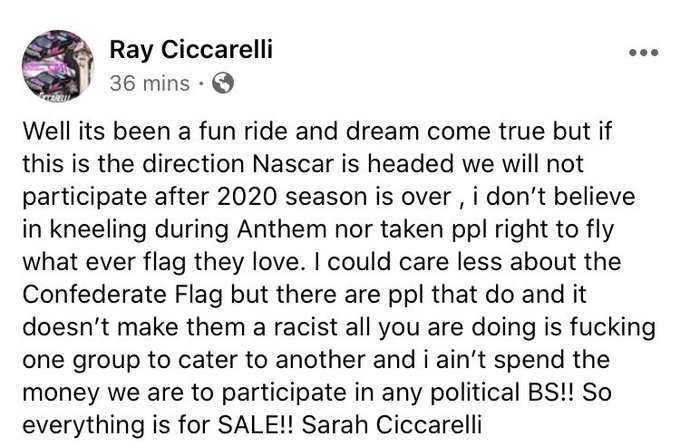 The sport, which saw explosive growth in the late ’90s and early 2000s, is running on fumes, leading executives thirsty for ways to expand their fan base, but at risk of alienating their existing base.

There are the perennial gripes over the dominance of the France family’s influence over NASCAR’s business structure, policies, and decision making, as well as a deviation from the true “stock car” racing that built the sport. But the bigger troubles started when NASCAR introduced a playoff format, leading to questionable wins and a slight ratings drop and pull-outs from big tobacco companies. Then came the reaction to the tragic death of Dale Earnhardt Sr. at the 2001 Daytona 500, followed by the introduction of a safer “Car of Tomorrow.” Ratings plateaued as racing quality decreased according to may fans. Next, a building spate of flat, 1.5-mile tracks in Kansas, Nevada, and Illinois further watered down the thrill of the sport in an effort to make the races even more safe for drivers.

Throughout that time, fans began to complain about frequent rule changes (and an overabundance of caution flags) suspected to bolster celebrity racers such as Dale Earnhardt Jr., Tony Stewart, and Jimmie Johnson, and (in theory) boost fledgling ratings. Then came a spate of identity politics in NASCAR, pushing for more prominent black drivers and female drivers as a means to break the rural, Southern-white stereotype — hoping for better performances from Danica Patrick and Bubba Wallace. NASCAR has recently allowed for kneeling during the National Anthem and a Black Lives Matter-themed car.

Yet the current fan base remains a powerhouse of Southern sentiment. President Donald Trump buzzed the Daytona 500 track with Air Force One by a low 800 feet in February, shortly before taking The Beast (a nickname for the presidential limo) for a lap. Trump served as grand marshal and gave the “start your engines” command. First Lady Melania Trump gave a brief address, which was well-received by the still-conservative audience, and viewed by 23 million on television. By contrast, then-First Lady Michelle Obama was summarily booed.

The next stops for NASCAR are the Hooters 250 and the Baptist Health 200 at Homestead-Miami Speedway on Saturday, and the NASCAR Infinity Series 250 and Dixie Vodka 400 in Miami on Sunday.

From the hip: It’s a convenient time for NASCAR’s executives to take the plunge on exiling the Confederate battle flag. Actually, it’s quite brilliant strategy for a move that strikes at a foundational image of the sport.

Execs and marketeers can easily blame COVID-19 fears for a drop in attendance and revenue. A fire hose stream of hot-button issues provides camouflage so this flag flap does not become the issue du jour for Southern conservatives.

While it was once part-and-parcel to the sport’s marketing, NASCAR execs have been trying to sweep Confederate imagery under the rug for years.

In 2012, NASCAR axed plans to have pro golfer Bubba Watson drive a promotional lap in a 1969 Dodge Charger painted as the General Lee of “The Dukes of Hazzard” fame at the Sprint Cup series in Phoenix. “The image of the Confederate flag is not something that should play an official role in our sport as we continue to reach out to new fans and make NASCAR more inclusive,” NASCAR said in a statement back then.

(Watson pointed out that both “The Dukes” and NASCAR owe their origins to moonshine runners and their legacy. No matter.)

In 2015, many tracks reacted to Charlottesville by offering to exchange Confederate flags for U.S. flags. There were few takers.

Now the powers-that-be can finally go after the fans in the stands and the on-property campgrounds surrounding the track.

The opportunistic taking-down of Confederate imagery during racial unrest and protests is tempting for elected politicians and image-focused corporate execs alike. As a prominent example, then-Gov. Nikki Haley had her Confederate flag lowering moment during the Charlottesville protests with little resistance. And now, monuments across the country are going down almost effortlessly after the death of George Floyd. Even a Texas Ranger statue was hauled away at a major airport in Dallas with practically no outcry. Now unrelated attacks on memorials depicting George Washington, former Texas Gov. Jim Hogg, and even Boy Scouts founder Lord Baden-Powell are being successful across the U.S. and the world. The iconoclastic spirit is in high gear.

NASCAR thinks they have finally rid themselves of this oh-so-embarrassing accouterment to motor sports of varying kinds, but the battle may just be beginning. The question remains how they will stop fans from waving contraband flags from RVs in the campgrounds, or in non-official camp sites within driving distance of the tracks? What about Mississippians whose state flag still features prominently the Rebel flag (a track is reportedly being eyed for construction in Jackson).

Add a flag ban to growing fan dissatisfaction with NASCAR in general. This will not help ratings or attendance, even if radical Left activists are temporarily assuaged.

Interested in more national news? We've got you covered! See More National News
Previous Article PERRICONE: Do You Want To Know What Police Experience Daily?
Next Article NASCAR Bans Confederate Flag, Pelosi Calls for Statue Removals as One Is Torn Down