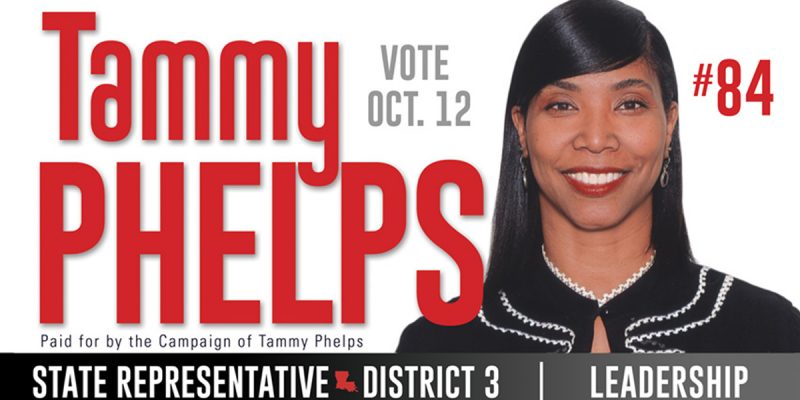 Democrat former state Rep. Barbara Norton set the bar pretty low in representing her District 3 constituents. However, her successor Democrat Tammy Phelps looks as if she’ll give it a go to do even worse.

Norton, who ran for offices seven times before finally notching a win in 2007 for that one, like most legislative Democrats made poor voting choices. Yet more than most, she opposed educational accountability measures, supported higher taxes and redistributionist government to the extreme, backed stupidly excessive regulations on business, and wanted to clamp down on Second Amendment rights.

But where she truly sunk to infame was the staggering amount of intemperate factual ignorance she brought to her barely-literate speechmaking in committee and on the floor, spouting off bilge such as America should repudiate the Declaration of Independence and not allow its study in schools and when colleagues pointed out the fatal flaws in a bill of hers requiring movie theaters to have metal detectors she said opponents aided and abetted in killing children.

Perhaps the lack of any meaningful substance to her worldview was epitomized when, on the last day of the 2009 Regular Session, she introduced a resolution honoring her godson Chris Dooley, who authored rap music under the name Hurricane Chris. She decided to play an expurgated version of his latest hit to the chamber, and although that excised the profane, more sexually-suggestive and misogynist lyrics, it nonetheless didn’t seem to impress the remainder of the chamber.

Almost 11 years later, Dooley was arrested for homicide. Video footage showed him shooting a man over a stolen vehicle in Dooley’s possession.

Phelps seems hardly capable of doing worse. She cut her political eye teeth on the Caddo Parish School Board, espousing policies in line with Norton’s, but here and there gave other indications that mirrored Norton’s style and temperance, although communicating much more literately.

For example, in 2007 when the Board deadlocked over selecting a black superintendent candidate which prompted a move to reopen the search that could include the white interim superintendent at the time, Phelps declared this an episode of vaulting the “least” qualified finalist and racist in motivation. And in 2009 when Phelps presided over the Louisiana School Board Association, an organization that consistently has placed protecting the tenures of its members over beneficial changes to help students, on behalf of the organization she initially refused to meet with then-Superintendent Paul Pastorek because of policy differences.

A decade later, she barely gained election last year pitted against a trainee from the far-left Emerge Louisiana campaign instruction organization that attempts to guide like-minded female Democrats into elective office. Now with some legislative sessions under her belt, she seems bent on continuing Norton’s tradition of toxic, ill-informed outspokenness.

Throughout the session she piped up often about business tax relief to offset the economic slowdown triggered by proclamations from Democrat Gov. John Bel Edwards designed to combat the Wuhan coronavirus pandemic. Legislative Republicans have observed that the breadth and duration of the shutdown seemed based more in politics than in data, and have launched efforts to overturn it.

This brought out the latest Norton-like ignorance and bile in Phelps. Last week, as GOP legislators discussed petitioning to rein in Edwards and noted the incomplete economic reopening in the state, Phelps asserted that the economy had reopened, explaining “It may not be at the capacity some of you want, but everyone has a right to do what they want. No one’s constitutional rights have been taken away.”

Contrary to Phelps’ statement, under existing Edwards guidelines currently to last until Jul. 24, some businesses remain closed. Others cannot provide their full range of services.

But Phelps had to double down on stupidity when she added a mean-spirited and insulting, “Some of you may not care about someone else’s life. Some of us do.” Not only did that show a certain level of obtuseness – pointing out that the proclamations had gone overboard indicates sound judgment and prudence that transcends the politicized outcome favored by Phelps and her shrugging off “deaths of despair” caused by the shutdown – but also displayed unbecoming intolerance and arrogance rooted not in understanding of and compassion for others, but in unthinking ideology.

Norton compiled a truly awful three terms in office. It’s still only her first few months on the job, but initial indications suggest Phelps might outdo her in idiocy.