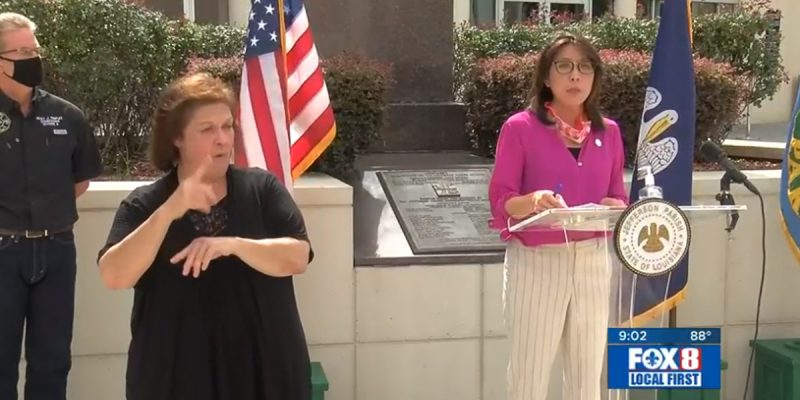 She officially becomes one tomorrow, when Jefferson Parish uses the Constitution as a diaper by attempting to force everyone there to wear a mask at all times when in public. That is failure, plain and simple.

Jefferson Parish President Cynthia Lee-Sheng said she has signed an emergency declaration that will require people to wear masks to protect against the spread of COVID-19 starting on Wednesday (July 1).

“I’m disappointed by the numbers we’ve seen this week,” the parish president said during a Monday news conference.

Sheng recently announced the start of a COVID-19 compliance hotline for residents who found business that were not in compliance with social distancing guidelines.

She said the parish expected about 30 phone calls, but got more than 500.

The state has seen a large jump in cases recently after the state began Phase 2. Because of the reports, Governor John Bel Edwards decided to hold Louisiana in Phase 2 for an additional 28 days.

She laid out guidelines that included wearing masks in restaurants, outdoor public spaces and government buildings. If you are sitting at a restaurant table, then you will be allowed to remove your mask to eat.

The parish president said she does not want the parish to regress, and that one bad weekend could ruin the work that has been done since March.

Are we hallucinating here?

Exactly how is one to wear a mask in a bar or restaurant?

You eat and drink in a restaurant. Does Cynthia Lee Sheng think it’s possible to do that with a mask on?

The stupidity and caprice involved in such an order is breathtaking, though when someone is ticketed in Jefferson for not wearing a mask and rushes into federal court to assail this petty tyranny for the unconstitutional assault on civil rights that it is, it won’t likely last very long.

And what’s the justification for this idiocy, which is being threatened as well in Baton Rouge (the capital city’s mayor has now set up a snitch line for people to report businesses whose employees are not wearing masks at all times)?

Of course, more testing is being done now than ever before, so increases in case counts were inevitable. The entire point of “flattening the curve” was never to stop people from getting the virus – that was never possible once it had spread out of China. The point was to insure the health care system wasn’t overwhelmed. It wasn’t, but what that meant was that people would continue to contract the virus for the foreseeable future – just not in numbers the hospitals couldn’t handle.

Currently, as of yesterday’s numbers Louisiana had 737 people in hospitals with the virus, which is a little more than a third of what the state had at its height. There’s an interesting little statistical tic at work here as well; now that hospitals are taking in patients for elective and non-emergency medical procedures and surgeries again, there are more patients coming through the doors. They’re all getting COVID tests, whether they have symptoms or not. And if they test positive, we’re told, they’re counted as COVID hospitalizations. Meaning that people coming in for hip replacements, knee surgeries or chemotherapy, who aren’t sick with the virus, are being counted as virus hospitalizations.

And now that the demographics of people who are contracting the virus have shifted to younger, healthier folks far less at risk of death, case counts are no longer anything to worry about. In fact, they’re a good thing, because high case counts indicate a march toward herd immunity.

And the health care system is not going to be overwhelmed. Houston is currently a far worse hotspot for the virus than Jefferson Parish is, and yet hospital administrators there say they’ve got a huge amount of capacity available.

Meanwhile, let’s understand how ridiculous a failure this is on Sheng’s part.

She says she will fine business owners $500 for not obeying her order – to do so would be a misdemeanor carrying that fine or six months in jail. But she has neither a state statute nor a parish ordinance to back such a claim. The parish council has not voted on any ordinance to the effect of her order, and as we understand it is a lot more likely to repudiate her than to back the order with the force of law.

Sheng denies anyone will go to jail for violating her mask order, but claims she’ll “aggressively pursue” violators. With what?

Sheng was elected last year in a landslide. She’s performed horrendously since taking the job. Jefferson should be raking in business and economic activity in the wake of New Orleans’ complete collapse, and it most certainly isn’t.

She’s a failure. This mask order proves it. All it does is to kill badly-needed economic activity. It won’t save any lives or do any good. But at least the people of Jefferson Parish know they need a new parish president when Sheng comes up for re-election in 2023.